Obama’s inaction in Syria is nothing new – the US has been selective in its Middle Eastern interventions for a century.

Obama’s inaction in Syria is nothing new – the US has been selective in its Middle Eastern interventions for a century.

The conflict in Syria is likely to be one of President Obama’s most important foreign policy legacies, with many already believing that his administration’s inaction (despite its statements of intended action) in that area was a major departure in US foreign policy towards the Middle East. Jasmine Gani writes that the early part of the twentieth century saw a similar period of selective inactivity in the Middle East for the US, when it had sympathy but gave no material support for Arab independence movements into the 1940s.

As the Obama administration draws to a close, analysts are busy assessing his presidency, identifying achievements and failures during his two terms in office. In the realms of US Middle East policy, Barack Obama has been keen to present the Iranian nuclear deal as his greatest legacy; however, it is the conflict in Syria which is more likely to define his administration’s foreign policy in the years to come.

Much of the analysis has been highly critical, focusing on Obama’s apparent lack of leadership and decisiveness over the Syrian crisis. The perceived inaction appears accentuated when compared with the hyperactivity of the Bush administration which came before. This has given rise to the notion that Obama’s caution reflects a major departure for American foreign policy in the Middle East. However, this comparison between recent US administrations gives us a severely limited, short-term view of the crisis, and tends to condense the debate to partisan point-scoring.  In reality, the US has a long record of selective inactivity when it comes to the region.

A more interesting comparison can be drawn between America’s foreign policy predicaments now, and those of the early twentieth century when the US first staked its claim as a superpower – both being periods of transition in US grand strategy. During World War I, while Europe embroiled itself in a conflict that decimated its populations and economy, the United States was able to enhance its own position as both the inheritor and challenger to Europe’s global power.  US leadership was unofficially announced via its role at the Paris Peace Conference in 1919.  At this and further meetings, the US positioned itself as the arbiter to Europe’s squabbles and criticized the secret diplomacy, militarism and imperialist competition that consumed western politics.  American idealism and altruism were cemented in the eyes of global actors via its laudable rhetoric. Concerning the Middle East, President Woodrow Wilson stated in his address to congress in 1918:

“The other nationalities which are now under Turkish rule should be assured an undoubted security of life and an absolutely unmolested opportunity of autonomous development”.

With the subsequent collapse of the Ottoman Empire came the formation of the rump Turkish Republic. This example helped to establish the nation-state model as the solution for its Arab neighbors as well. The United States did not contest Europe’s imposition of the state system in the region – after all, Wilson had championed the nation-state as the enabler of self-determination.  Nevertheless, the US did question the imposition of entirely arbitrary national boundaries, and initiated the King-Crane Commission in which businessman Henry King and academic Charles Crane, were sent to the region on a fact-finding mission to gauge the opinions and national aspirations of Arabs.  From this extensive, grass-roots survey, it was clear that while Arabs were resigned to the separation of the former Ottoman lands, those from the historical region of Bilad Ash-Sham wanted to be a unified political entity. This gave hope to Arab populations that their agency would be respected, and made them look to the United States as a benevolent power that would listen to indigenous voices, address their concerns, and facilitate their vision.  Historical documents convey the extent to which US rhetoric, and the limited non-binding action via the King-Crane commission, produced high expectations, and in turn, even greater disappointment when they were not met.

American reticence to follow up on its rhetoric began at an early stage.  The United States’ previous criticism of European imperialism was curiously absent in a meeting of the ‘Council of Four’, in which the British and French mandate system for the Middle East was enshrined in law, with Iraq transferred to British control and Syria to French control. The findings of the King-Crane report were ultimately disregarded by the US for (as the authors of the report candidly observed) the sake of maintaining friendly relations with the European powers.  Moreover, the mandate system itself had been approved by the Covenant of the League of Nations, the personal brainchild of Woodrow Wilson – thus there emerged a direct contradiction between his allusion to Arab sovereignty in his Fourteen Points, and his practical implementation of liberal institutionalism. 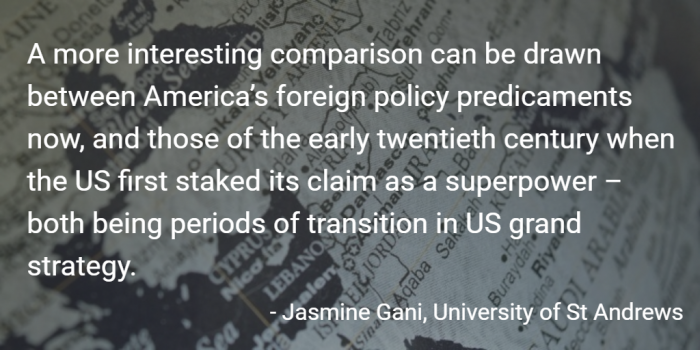 The US subsequently maintained its isolationist position throughout the interwar period, overlooking British and French imperialist transgressions, while only engaging with the Middle East to secure its commercial interests in the newly emerging oil industry in Saudi Arabia.  Little had changed in US policy by 1945, despite the increase in popular protests against the Europeans, and rising instability throughout the region.

When pressed by Saudi officials for a statement explaining US policy towards the region, the State Department merely responded with non-committal sympathy for Arab independence; but internally the issue was more contentious.  Members of the State Department deployed in the Middle East were increasingly aware of the need for more direct and practical support for the Arab cause, arguing for a yearly allocation of funds by the State, War and Navy Departments to states like Syria for the sake of preserving security. However, they were unable to persuade their administration to provide any real financial or military support to those Arab states challenging colonial rule.  The following memo in 1945 by Gordon Merriam, Head of the US Middle East division, summed up the State Department’s frustration at their government’s inaction:

“Our policies in these situations are not worth the paper they are written on because we have not prompt and effective means of carrying them out”.

In spite of this, the United States continued to publicly advocate Syrian independence, and indeed castigated its French allies for their maligned and repressive colonial presence in Syria.  But despite their pleas for practical support, the matter was ultimately left to the Syrians themselves to oust the French, at great human cost, with some military support from neighboring British forces in Jordan.

It was telling that the United States only came forward offering financial and military aid with the onset of the Cold War, when stronger alliances with Syria and the Arab states suddenly became strategically valuable in the fight against the USSR.  By then, however, the US had squandered valuable early assets of trust and reliability.  US promises of support were by that stage perceived by Syrian political elites and nationalist groups as self-interested, conditional and inconsistent.  It was in this context that Syria turned to the Soviet Union as its strategic partner during the Cold War, having lost faith in the US.

This history between the US and Syria provides examples of mismatched rhetoric and praxis, as well as missed opportunities by the United States.  It also highlights the real dilemmas faced by the US: ironically, if the US had remained neutral and had not shown greater support for Syrian independence and agency, it would have faced less criticism and fewer accusations of double standards.  And yet, the need to export a benevolent image of a global power that was on the right side of history, continued to produce public statements without active implementation.

Fast forward to the Obama administration and its policy on the Syrian conflict, and it is clear that the government’s realism has been undermined by early statements committing itself to action; this rhetoric was intended to keep the rebels onside, maintain pressure on Assad, and deflect domestic and international criticism of US apathy; yet the US appears to have failed on all three counts.  As highlighted above, this is not unprecedented behavior in US foreign policy.  Notable parallels can be identified between tensions in the Obama administration and the divisions afflicting the Wilson administration in the interwar period when US grand strategy was still in gestation. Then, the US faced uncertainty and manifested incoherence as it wrestled between isolationism and an aspiration to be a global power; one hundred years later, the US is manifesting similar foreign policy traits, but this time as it seeks to manage its descent.