Social media and online communities expose youth to political conversation, but also to incivility and conflict.

Social media and online communities expose youth to political conversation, but also to incivility and conflict.

The internet and social media now mean that young people are more able to engage with, and participate in the political process. But does this engagement also expose young people to a greater risk of online abuse? In new research Ellen Middaugh investigates the exposure to conflict and incivility of young people who engage politically online. She finds that exposure to online conflict is common, and is associated with participatory media, and that many youth also see no problem with escalating language and personal insults in online political conversations.

Political conversation plays an important role in helping young people develop their political identities.  The conversations they hear and participate in can spark interest in issues, help them learn information, and motivate them to act.  With the internet and participatory media, young people today have access to a large range of political conversation, far beyond their parents, teachers and geographically close peers.  This has a lot of positive potential for fostering participation.

However, as youth discuss political issues online, view news through participatory media, and participate in online communities, their exposure to incivility (arguments that rely primarily on inflammatory language and personal insults) also increases.  With my colleagues Benjamin Bowyer of Mills College & Joseph Kahne of the University of California, Riverside, and the Civic Engagement Research Group, my research seeks to understand what impact this is having on the next generation of voters, and how educators can respond.

Participatory media is an important socializing agent for young citizens

Surveys suggest people of all ages increasingly rely on participatory media (media that invites participation through comments and circulation) for news and political involvement.  When it comes to political posts, it is not hard to find examples of things getting out of hand, with accusations of personal and moral failings, peppered with swear words.

For those of us who study youth political development, the question is whether this has a negative impact on whether and how they participate in politics.  Adolescence and young adulthood is a time when people explore and consolidate their views on society and develop views of themselves as political participants. While adults of all ages use social media for news and political involvement, for youth, it is part of the landscape of their political identity development.

If much of the political discourse they see online is uncivil, we may have a problem.  This generation of new voters may be learning that personal attacks are normal, that political conversation is impossible, or that political engagement is distasteful.

But not so fast.  While examples of incivility are easy to find, research that analyzes political discussion groups finds that “flaming” or personal attacks are present, but limited—only about 14 percent of comments according to one study by Zizi Papacharissi.  Furthermore, most young people are not active in such groups, leaving us unclear on how much exposure youth actually have to such conversations.

Is exposure to incivility common?  To answer this question, we used standardized scenarios modeled after comment threads that met our definition of uncivil.  We found that exposure to online conflict is common, with about 43 percent of our participants saying they have seen exchanges like this online.   While this is fewer than half, it is about the same number of youth who express interest in politics (45 percent). 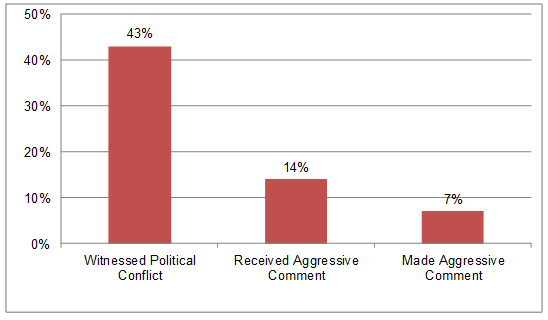 Exposure to conflict seems to be particularly associated with participatory media.  Those who visit online newspapers (such as the New York Times site) do not report more exposure to conflict.  However, those who use participatory media are more likely to not only see such comments, but in the case of social media, are more likely to directly participate by giving comments like those presented in the scenarios.

Online communities often support political engagement, but they also engage youth in political conflict.  Previous studies find that when young people participate in online communities—for example fan fiction communities or gaming communities—they receive many of the benefits that we see with civic groups of the past, like bowling leagues. Those who are active in such communities are more likely to report hearing perspectives that are very different from their own and  to become active in a range of political activities.  At the same time, this most recent study finds that participation in such communities increases the likelihood that youth directly participate in these political arguments, both receiving and giving comments like the ones they see in the scenario.

At this point, one may think, so what?  Political discussion is important, and it can get heated sometimes.  Our scenarios did not, however, present a substantial exchange of ideas. Rather, participants’ were given a scenario that quickly escalated, beginning with comments like, “We need to protect America for real Americans!” to “That’s exactly the kind of racist response I would expect from a redneck like you,” in responding to a post about immigration.  While these don’t represent the worst of comments, they do not share much information about why people believe different things or suggest much interest in or respect for the other person’s viewpoint. 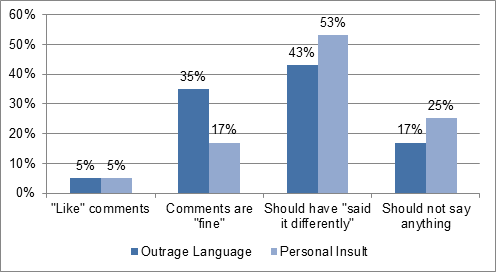 When we asked our participants what they thought, we found many youth see no problem with escalating language (39 percent) and personal insults (23 percent), saying either that they like such comments or that they are fine, just someone expressing a point of view.  Though this is a minority, the concern is that it indicates a high degree of tolerance for unprod uctive conflict, which will in effect silence those who find it more upsetting, such as the 25 percent who suggested if they were in the situation, they would say nothing.

The good news—education can help.

With findings like these, there is a temptation to throw up our hands, declare that the internet is ruining political discourse, and talking politics online should be avoided.  This response is both impractical and undesirable.  Leaving online political discourse to those who are comfortable with escalation and insults isn’t helpful and robs many young people of the potential power of social media to engage with a broader world.

The good news is that educators are beginning to take this challenge seriously and to create innovations to support online dialogue.  Projects like Out of Eden work to explicitly develop the skills of productive online dialogue. My colleagues and I have also begun to study the efforts of teachers to support student’s use of social networks and collaborative tools.  While these efforts are new, our preliminary findings suggest that this kind of classroom support helps students build confidence in sharing their perspectives online and appreciate feedback from others.

This article is based on the paper, ‘U Suk! Participatory Media and Youth Experiences With Political Discourse’, in Youth & Society.

Ellen Middaugh – San José State University
Ellen Middaugh is an Assistant Professor of Child and Adolescent Development in the Lurie College of Education at. Her research focuses on youth civic and political development, civic education, and the implications of digital media for supporting positive youth development.  She is co-editor with Ben Kirshner of the recent volume #youthaction: Becoming Political in the Digital Age.