Many in the media focus less on what Hillary Clinton Says, and more on how she says it. In new research, Jennifer J. Jones looks at how Clinton’s use of language has evolved in interviews and debates over her 25-year career in politics. She finds that over time she has spoken in an increasingly masculine way. She also writes that during Clinton’s first presidential campaign in 2007, when she was trailing Barack Obama, her language became more feminine, in order to increase her likability.

“I get it that some people just don’t know what to make of me.” –Hillary Clinton, Democratic National Convention acceptance speech

Like many of her past speeches, reactions to Hillary Clinton’s historic acceptance speech at the Democratic National Convention focused not on what she said, but how she said it. Fox News commentator Greg Gutfeld tweeted “even when she says, “you know,” it’s recited like a wind up doll” and New York Times columnist David Brooks told PBS News anchor Judy Woodruff that Clinton failed to “emotionally connect” in her speech. When Clinton talks, it comes across as unrelaxed, hair-raising, nagging, and grating. It conflicts with our expectations about how she should behave.

As a leader, she is compared against traditional masculine qualities that we have come to associate with leadership—strength, determination, self-confidence, decisiveness and more. She is criticized when she fails to display these masculine qualities and yet she is criticized and disliked when she fails to display her warmth and femininity—a classic “double-bind” that women in politics and other leadership positions often confront.

Over the course of a 25-year career in politics, Hillary Clinton’s linguistic evolution reveals a lot about how women position themselves for success in male-dominated professions. As the Democratic nominee transitioned from first lady to US senator to secretary of state, she spoke in an increasingly masculine way. In talking more “like a man,” Clinton conformed to prominent gender norms in US politics. 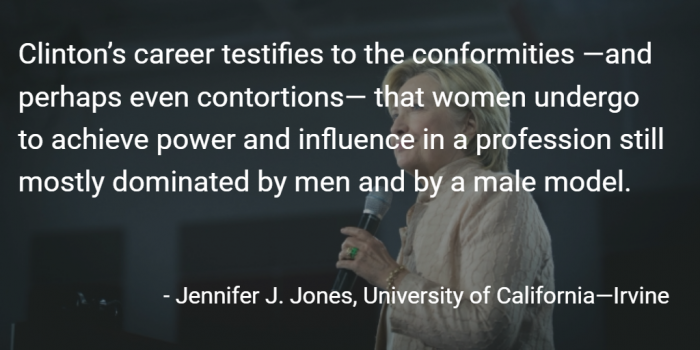 Social psychologist James Pennebaker of the University of Texas at Austin has discovered that men and women tend to speak differently – not in the content or topics of their conversations, but in the use of seemingly unremarkable “function words,” such as pronouns and prepositions. We use function words to structure and connect our thoughts when communicating with others. For this reason, they reflect both the deeply social nature of communication as well as how individuals organize and orient themselves within the world.

Feminine speech tends to be dynamic, oriented around people and relationships.  In general, women tend to use pronouns (you, theirs), and especially first-person singular pronouns (I, me), more frequently than men. They also use common verbs and auxiliary verbs (is, has, be, go), social (friend, talk), emotional (relieved, safe, kind), cognitive (think, because), and tentative (I guess, maybe) words at higher rates than men.

Masculine speech, on the other hand, tends to be organized in temporal and spatial hierarchies, focusing on concrete objects and events in the world. In general men tend to use first-person plural words (the royal “we”), articles (a, an, the), prepositions (of, to, under), big words (over six letters), words associated with anger (destroy, kill), and swear words ([redacted]) more frequently than women.

Here’s an example of how Clinton’s grammar has changed

Consider a pair of examples from interviews that Clinton gave, more than 20 years apart. Below, Clinton’s response is coded such that feminine words are in red and masculine words are in black. Words in gray are neither masculine nor feminine.

In 1994, Larry King asked Clinton to react to the passage of the assault gun ban.

I was thrilled, Larry. I mean, it is such a great step for this country to start taking control of our streets and our neighborhoods again. You and I have talked about that in the past. And it has to be seen in context. It must be part of the larger initiative.

This July, Fox News host Chris Wallace asked Clinton to react to the Supreme Court’s decisions on the second amendment.

Particularly revealing are changes in Clinton’s use of pronouns—from a total of eleven in the 1994 excerpt (23 percent of all words in 1994) to six in 2016 (10 percent). Meanwhile Clinton’s use of prepositions doubles—from 10 percent in 1994 to 21 percent in 2016. Her 2016 response is less tentative and personal, but more complex and distant — all markers of masculine language.

Changes in Clinton’s style are evident not just in these excerpts, but in 567 interview and debate transcripts I analyzed from 1992 through 2013.

In Figure 1 below, I calculated the ratio of feminine to masculine words in each transcript and, weighted by the number of words per transcript, averaged these values by year. The blue line represents the general trend and the dotted lines represent election years in which Clinton actively campaigned for herself (2000, 2006, 2008) or Bill (1992, 1996). Higher values indicate more feminine speech; lower values indicate more masculine speech. 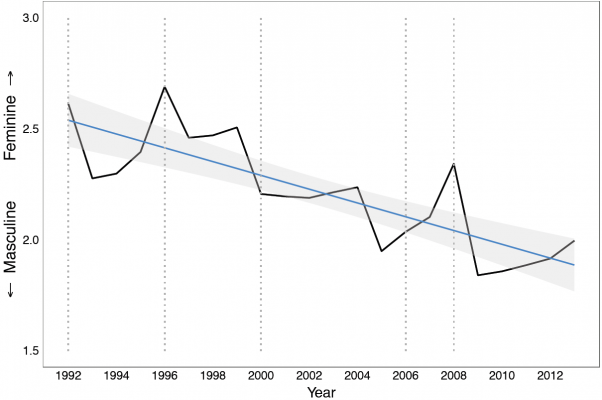 Over this period, Clinton’s speech became increasingly masculine. When she occupied a political office or took on a major policy initiative, her language shifted to a more masculine style. In 1992 and 1996, Clinton’s linguistic style was consistent with her more feminine role as the wife of a presidential nominee. But when she led the administration’s health reform policy in 1993–1994, Clinton’s language changed to suit the political environment, reflecting masculine norms of communication that dominate policymaking.

After 1994, Clinton performed more traditional duties of the first lady and her language followed suit, turning more feminine. As a candidate for the US Senate, her language shifted toward a masculine style, sustained throughout her time in Congress. As Secretary of State, her language again conformed to the masculine expectations of her position.

Looking at her first presidential campaign, I find that for most of 2007, Clinton’s language is consistently more masculine. By late 2007, however, when she was trailing far behind Barack Obama on measures of likability, Clinton’s language became more feminine, particularly in interviews. 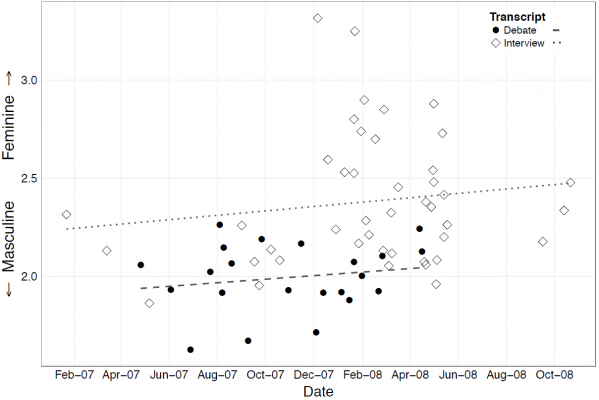 Clinton, in response to her likability problem, deviated from her dominant, masculine strategy in late 2007 into early 2008 in order to present herself to voters as a warmer, more feminine candidate. This shift in strategy marks an interesting point of disruption in Clinton’s language as well.

I do not find similar changes in the language of male politicians. For instance, John Kerry has taken on many of the same roles as Clinton. Between 2004-2015, the ratio of feminine to masculine words in Kerry’s interviews remains flat around 1.8.

Keep I mind, I only analyzed transcripts from natural language sources — interviews and debates — not speeches or other formal addresses. This means that Clinton’s language became more masculine even outside the formal boundaries of the institutions she served. So too, Clinton’s language changed even when the topic of conversation did not.

What does Clinton’s language tell us about women who succeed in US politics?

Like most women in leadership, Clinton has had to navigate countless social and psychological barriers to her success. She has had to cultivate an appropriate and effective self-presentation that reconciles symbolic attitudes toward gender with masculine expectations of leadership.

For this reason, Clinton’s words are almost certainly more calculated than her male colleagues and opponents who—by virtue of their gender—embody the dominant prototype of a political leader. Clinton’s career testifies to the conformities —and perhaps even contortions— that women undergo to achieve power and influence in a profession still mostly dominated by men and by a male model.

Perhaps we need to see a woman in power before we can accept powerful women who talk… like women.

This article is based on the paper ‘Talk “Like a Man”: The Linguistic Styles of Hillary Clinton, 1992–2013’, in Perspectives on Politics.

Jennifer J. Jones – University of California—Irvine
Jennifer J. Jones is a Doctoral Candidate in the Department of Political Science at the University of California—Irvine. Her research is focused at the intersection of American politics, political psychology, and political communication, and her dissertation builds on this article to examine the linguistic styles of US party leaders, governors and presidential candidates and to explore whether such language acts as an implicit cue informing candidate evaluations.