If you’re a man, working part-time can reduce your chances of getting a new job as much as unemployment does.

If you’re a man, working part-time can reduce your chances of getting a new job as much as unemployment does.

Unemployment often has wide-ranging negative consequences for those who experience it, including making it harder to get a new job. But what effect does part-time work or work in a job below a person’s skill level have? In new research, David S. Pedulla investigates the effects of these ‘nonstandard’ and ‘mismatched’ jobs on people’s employment chances. By sending out thousands of fake job applications for male and female applicants with distinct employment histories, while holding all else constant, he finds callback rates for men in full-time employment was 10.4 percent, compared to 4.8 percent for those in part-time work and 4.7 percent for those in jobs below their skill level. By contrast, women in full-time and part-time work had little difference in their callback rates.

Most of us have family members, friends, or acquaintances that have experienced unemployment. It can be a brutal experience, economically, socially, and psychologically. A large body of academic research backs this up. There are far-reaching consequences of being unemployed. These effects span many domains of life, from health, to family dynamics, to psychological wellbeing. There is also evidence that unemployment can lead to lower earnings down the road.

Following on this line of research, a recent body of scholarship has asked whether there is also a direct effect of unemployment on being able to get a new job. In other words, do employers screen out job applicants who are unemployed in favor those who are currently working?

In general, the answer appears to be “yes.”

While unemployment is certainly an important social and economic experience, it is not the only type of position in the labor market that deviates from having a full-time, standard job. In fact, millions of workers in the United States labor in nonstandard jobs, such as part-time work, as well as mismatched positions, such as jobs below their skill or education level.

Yet, these types of positions in the labor market generally receive less attention than unemployment, particularly with regard to how they affect future employment opportunities.

To tackle this question, I used similar methods to those that had been deployed to study the effects of unemployment on hiring outcomes. I sent out thousands of fake job applications to apply for real job openings across four types of occupations in five cities: Boston, Atlanta, Chicago, New York, and Los Angeles. I randomly assigned the applicants different employment experiences in the 12 months leading up to submitting their application, including: a full-time job at their skill level, a part-time job, a job below their skill level, or unemployment. I also varied the gender of the applicant using male and female names.

What did I find? 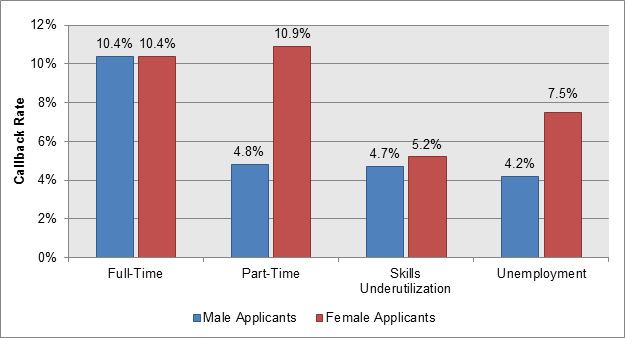 The Gendered Consequences of Part-Time Work

A Job below One’s Skill Level

While there were important gender differences in the treatment of applicants with part-time employment histories, taking a job below one’s skill level affected men and women in similar ways.

Thus, for both men and women, taking a job below their skill level was severely penalizing compared to remaining in a full-time job that utilized their skills and experience.

Unemployment is, of course, extremely important and has far-reaching consequences for workers and their families. But, the effects of part-time work and skills underutilization are also real and affect millions of workers in the United States. Yet, they are less frequently discussed and sometimes remain absent from our thinking about labor market inequality.

Situating part-time work and skills underutilization alongside unemployment as we think about interventions and policies to address labor market challenges is an important step toward ameliorating the various challenges faced by workers in the contemporary economy.

This article is based on the paper, ‘Penalized or Protected? Gender and the Consequences of Nonstandard and Mismatched Employment Histories’, in the American Sociological Review.

David Pedulla – Stanford University
David Pedulla is an Assistant Professor in the Department of Sociology at Stanford University. His research interests include race and gender stratification, labor markets, economic and organizational sociology, and experimental methods. His research has appeared in American Sociological Review, American Journal of Sociology, Social Forces, and other academic journals. He received his Ph.D. in Sociology and Social Policy from Princeton University.