Do presidents unite or divide Congress? In new research which analyses more than 6,000 roll call votes over nearly 40 years, Travis J. Baker finds that members of the opposition party are about 6 percent less likely to support a president’s priorities than members of the president’s party. This occurs even when legislators have the same voting record, and the differences get wider as presidents speak for longer on the issue. He argues that this effect is mainly driven by divided government, since at those times Congress is more likely to vote for bills which are opposed to the president’s agenda.

Presidents talk a lot about bipartisanship. It seemed like an obsession for Obama, at least in his first term. Speech after speech, from the stimulus, to the Affordable Care Act, to Dodd-Frank, Obama stressed the common ground that the two parties shared. But at the end of the day, he had little to show for his efforts. In his second term, Obama has turned to executive actions to secure his legacy – a tactic which has met with mixed success.

Obama’s failed attempts at winning bipartisan support are nothing new. In recent research I show that presidents since at least Nixon have polarized Congress when they prioritize issues. And polarization worsens as presidents place more emphasis on an issue. The harder presidents try to win bipartisanship, the more elusive it becomes.

Using data from more than 6,000 roll call votes between 1971 and 2010, I calculate Congress members’ probabilities of supporting votes on the floor. I examine the difference between members’ support levels on votes that are and are not a part of the president’s priority list, which I glean from his most recent State of the Union speech. To do this, I adapt a procedure first used by Jim Snyder and Tim Groseclose to measure party influence on members’ votes. The procedure calculates the difference between opposition-party members and presidential-party members with otherwise identical voting records in their probabilities of supporting the presidents’ position.

The data show that opposition-party members are about six percent less likely to support presidents’ priorities than presidential-party members with otherwise identical voting records, and this effect holds regardless of whether party control of government is unified or divided. At first glance, six percent might sound small. But if a number of members are on the fence about a given vote, an additional six percent difference between Democrats and Republicans can mean the difference between the vote passing and failing.

Finally, the polarizing effect of presidents has remained roughly constant over the forty year period, as shown in Figure 1 below. The graph presents the average difference between opposition-party members and presidential-party members (which I call the “Presidential Effect”) for each year in the data. Note that more negative values represent a larger presidential effect. 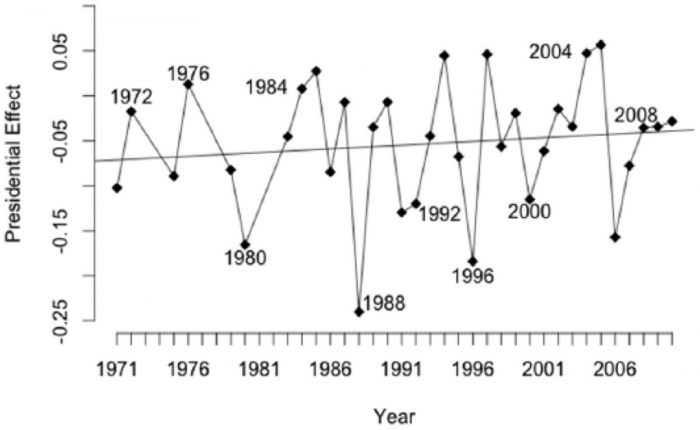 These findings add to a growing chorus in political science research that questions presidents’ abilities to lead Congress. In Beyond Ideology, Frances Lee used a similar measure of presidents’ agendas to show that presidents divide Congress more than they unite it. In The Strategic President, George Edwards III meticulously combed through presidents’ records to show their inability to persuade Congress.

So how can presidents increase their chances of congressional success? Speeches tend to exacerbate polarization and make compromises harder to find. In today’s already polarized climate, presidents may decide to forgo bipartisanship altogether. In that case, the data show that presidents may be able to increase support from their base by giving more speeches. But if presidents do seek at least a modicum of bipartisanship, they would be wise to avoid the call of the podium.

This article is based on the paper ‘Delayed Gratification Party Competition for White House Control in the U.S. House of Representatives’ in Political Research Quarterly.

Travis J. Baker – UCLA
Travis Baker is a Ph.D. Candidate in political science at the University of California, Los Angeles (UCLA). He studies the nature and origins of polarization and gridlock in American politics. More broadly, he is interested in the relationships between chief executives, legislatures, and the electorate.