State governments often enact tax incentives aimed at encouraging business. But why do states decide to introduce these incentives, and why do so many continue even when it’s clear the incentive hasn’t worked? In new research which studies state tax incentives for the motion picture industry, Michael Thom finds that increasing unemployment and the presence of similar incentives at the national level makes it more likely a state will adopt them. When it comes to incentives that have failed to work, many state governments are reticent to end them simply because so much has been spent on them, and ending them would have a large political cost.

Few topics have received more attention within public policy research than the policy process – i.e., the factors and mechanisms that shape governmental decisions. Most process studies share a common approach in which the author(s) seek to determine how and why a local, state, or federal government created a certain program or enacted a particular law. The question of why those governments might reverse course and terminate a program or law is often overlooked. That’s partly a product of circumstance; relative to enactments, terminations are few and far between.

Luckily, there are exceptions. Consider the rise and nascent fall of state tax incentives for the motion picture industry, programs that for all their diversity of structure had two common objectives: job creation and economic diversification. As Figure 1 shows, between 1997 and 2015, over 40 state governments enacted incentive programs aimed at enticing Hollywood to relocate. Figure 2 shows how spending on those incentives exploded from less than $1 million to nearly $2 billion annually. 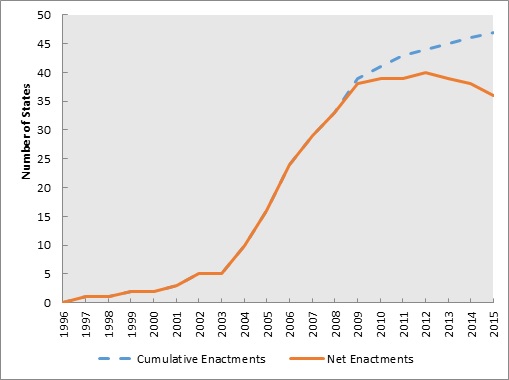 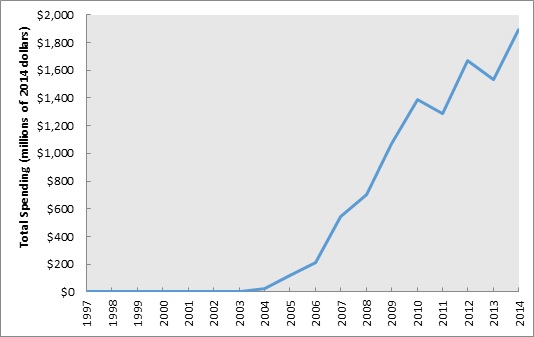 But despite that momentum, a dozen state governments ended their incentive programs. That begs three questions: Why did states enact the incentives in the first place? What led some to later terminate the incentives? Why haven’t more done so? The latter is especially important, given research from disparate sources (myself, the Tax Foundation, and the Center on Budget and Policy Priorities) that the incentives simply don’t work.

In new research, I attempt to answer these questions. I found that two factors were most supportive of incentive creation. One driver was increasing unemployment. For each one percentage-point increase in statewide unemployment, the likelihood of enacting the tax incentives increased by 24 percent. That finding makes intuitive sense; as joblessness increased, policymakers acted to create programs that would ostensibly create new jobs.

The other driver was the presence of incentives in other states. But while many studies have found that the mere presence of a policy or law in one state enhances the likelihood that it will spread to others, I found that explanation was too simple for motion picture tax incentives. My model suggested that national enactments “pushed” the likelihood of new incentives higher while enactments in bordering states “pulled” that likelihood down. Put another way, states without the incentives were tempted to follow national trends – a bandwagon effect – but may have been discouraged if their immediate neighbors already created incentive programs.

Arguably the more interesting question is why some states terminated their incentives while most have not yet done so. Not surprisingly, I found that falling unemployment increased the likelihood of termination. I also found that national terminations made it more likely other states would follow suit. Yet neither factor came close to guaranteeing a state would end its incentive program.

Why not? I found that the impact of cumulative incentive spending overwhelms all the other factors that might compel termination. Quite simply, the more money a state has allocated to the incentives, the less likely that state is to abandon them – exponentially so. In other words, it might not matter if unemployment is falling and other states have terminated their incentives. If a state has spent tens or hundreds of millions of dollars on their program, the probability of its termination approaches zero. 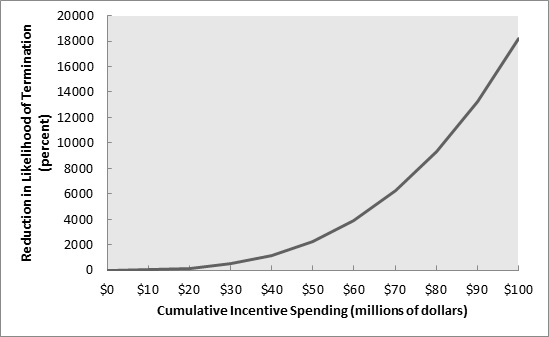 To better understand why that’s the case, think about what happens as spending increases. First, elected officials grow increasingly reluctant to change their position on a policy they once supported. That reluctance is part intellectual – no one likes to admit mistakes – and part practical. If reelection is the goal, no official wants to signal to voters and political opponents that they made bad decisions.

Second, the more money spent on targeted incentives like those for the motion picture industry, the greater the number of beneficiaries. Their testimony in the incentives’ favor is without balance from those made worse off, because the costs have been decentralized across millions or tens of millions of taxpayers.

And third, greater spending creates larger and more entrenched bureaucracies that, in turn, become powerful advocates for their own survival. The public employees that staff those bureaucracies (e.g., state film offices and economic development agencies) have a clear economic incentive to see the incentives continue – their personal livelihood often depends on it.

Heavy spending is not a guarantee of incentive continuation, although anecdotal evidence suggests termination in that context requires a combination of questionable efficacy, criminal activity, and political turnover. Michigan, for example, invested some half-billion dollars in motion picture incentives only to end the program in 2015, a decision made possible by gubernatorial and legislative turnover, heavy criticism of the incentive’s impact, fraud, and public knowledge of a strange deal in which the previous governor used one of the state’s pension funds as collateral for a film studio.

All things considered, it should not come as a surprise that most of the states that terminated motion picture incentives had spent very little on them. Whether or not more states will join the “early terminators” remains to be seen.

This article is based on the paper, ‘Fade to Black? Exploring Policy Enactment and Termination Through the Rise and Fall of State Tax Incentives for the Motion Picture Industry’, in American Politics Research.