It’s a fact that crime in the United States is concentrated in impoverished urban areas.  Although one often immediately thinks of the high rates of violence in most inner cities, property crimes like burglary and theft are also more prevalent in poor inner-city neighborhoods than their suburban counterparts. One reason may be that residents of disadvantaged neighborhoods engage in property crime to obtain material goods that they are unable to afford or otherwise attain through legal means. This suggests that the acquisition of valuable goods is a primary motivator of burglary, and that would-be offenders should be more likely to target wealthy neighborhoods, where the supply of valuable goods is greater. Why, then, don’t wealthier neighborhoods have higher rates of burglary?

Burglars are calculating and risk averse. As such, the possibility of more lucrative targets in affluent neighborhoods may be offset by the relative risk associated with their acquisition. Indeed, there are a number of factors that discourage offending in well-off neighborhoods. First, economic segregation means that affluent neighborhoods may be further away. Since traveling to different areas entails greater risks and increased effort, most potential offenders commit crimes close to home to minimize both. Additionally, this relies on the offender knowing about more valuable targets in affluent neighborhoods. However, potential burglars are most aware of opportunities in the nearby and similarly disadvantaged areas (where most burglars reside) because that’s where their daily life occurs rather than the physically distant wealthier neighborhoods.

Second, residents in well-off neighborhoods tend to be more socially connected, which facilitates the ability to collectively address problems such as crime or be on the lookout for someone who does not belong. Indeed, robbers have admitted that they avoid targeting areas where watchful residents might intervene. In contrast, the poverty, racial and ethnic diversity, and residential instability that typify disadvantaged neighborhoods reduce social cohesion and weaken residents’ ability to prevent criminal offending.

Taken together, target selection necessitates finding the optimal balance between risk and reward. Our research uncovers how the characteristics of an offender’s home neighborhood relative to each potential target neighborhood (i.e., all other neighborhoods in the city) affect target selection above and beyond geographic proximity to the offenders’ residence. To do this, we collected information on all burglary arrests in the city of Tampa, Florida between January 2000 and September 2012. The data contain suspects’ home and target addresses, which we mapped and linked to US Census socioeconomic and demographic data for neighborhoods.

Would-be offenders can theoretically choose any neighborhood within the city to target; therefore, we utilized a special statistical model that can examine what neighborhood factors might explain individual decisions on where to burgle. To illustrate the decision process we’re investigating, Figure 1 below depicts a potential burglar contemplating which neighborhood would yield the most rewards while minimizing the risk of apprehension. While assessing these dynamics, a suspect considers the distance of the target and the similarities to his home neighborhood. In this example, Neighborhood A has fewer risks because it is the most similar to the burglar’s home, but it’s likely the least lucrative, while Neighborhood C may be the most profitable, but has a higher risk of getting caught given the dissimilarities to the burglar’s home.

This article is based on the paper, ‘Relative Difference and Burglary Location’, in the Journal of Research in Crime & Delinquency.

Alyssa W. Chamberlain – Arizona State University
Alyssa W. Chamberlain is an Assistant Professor in the School of Criminology and Criminal Justice at Arizona State University. Her research examines neighborhood dynamics related to changes in social and demographic structure, housing, and inequality and the spatial distribution of crime.  She also examines issues related to prisoner reentry and corrections, including offender supervision, and neighborhood reintegration.

Lyndsay N. Boggess – University of South Florida
Lyndsay N. Boggess is an Associate Professor in the Department of Criminology at the University of South Florida. Her research focuses on the community correlates of crime, with particular interest in how neighborhoods change over time, the housing market and gentrification, and racial/ethnic composition and immigration. 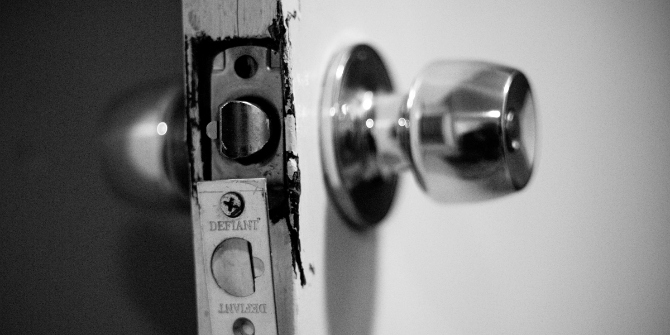