The past two years have seen more than 10,000 homes demolished in Detroit, Michigan. Such demolition policies which have no follow-up plans for development have gone from being controversial to the norm. In new research, Jason Hackworth questions the logic and practice of these policies, finding that the neighborhoods which have had the most demolitions are more economically and socially isolated than they were in 1970. He argues that vacant lots can be a negative force on nearby house values, and that cleared sites never attract the kind of investment money that a derelict house might.

On Tuesday, July 19 2016, Detroit Mayor Mike Duggan, locally-elected politicians, and neighbors gathered at 14097 Marlowe Street on the city’s west side to celebrate the 10,000th house demolition in two years—a momentous achievement. From a lectern carefully placed in front of a vacant home with a gigantic number “10,000” spray painted on its side, the mayor crowed, “Every time one of these houses goes down, we raise the quality of life for everybody else in the neighborhood.” Seen within a wider historical lens, this event, and others like it, is politically remarkable. Demolition without an affirmative plan to build something on-site was once a source of great controversy. During the urban renewal period in American history, many mayors (including Detroit’s at the time) became deeply unpopular for eviscerating neighborhoods with only the promise of new development to follow. The current wave of demolition in Detroit and beyond does not even make that promise.

Detroit is not the only city to have embraced demolition-only urban policy. Cities across the region are using a variety of federal and state funds to demolish as much “blight” as they can. To the extent that there is an intellectual reasoning behind this push, it is that vacant buildings suppress the house values of those within a certain radius. This notion has been verified by a number of studies—the most serious and comprehensive, performed on the city of Cleveland. They found that vacant houses serve drag down the values of other nearby homes. Overall, this leads to the suppression of house values, and by extension property taxes for the city. With this in mind, city officials are enthusiastically demolishing as many property value suppressors as they can with the hope that house values will increase and investors will be drawn back to the neighborhood to build. Demolition is the larval form of regeneration, right?

In recent work, I question the logic and practice of this paradigm shift. The truth is that while current efforts are being dramatically expanded, Rust Belt cities have been experimenting with demolition-only policy for decades. There are 268 neighborhoods in 49 cities in the region that have had half or more of their housing demolished in the past 45 years. The aggregate total of these house-by-house demolitions is greater in land area than the entire urban renewal period. How have these efforts fared? Short answer: not well. The neighborhoods where demolitions have been most active are more economically and socially isolated than they were in 1970 (the baseline year of the study) (see Table 1). House values, employment figures, and education-levels are lower in relation to healthier neighborhoods than they were in 1970. Racial segregation and poverty are higher. 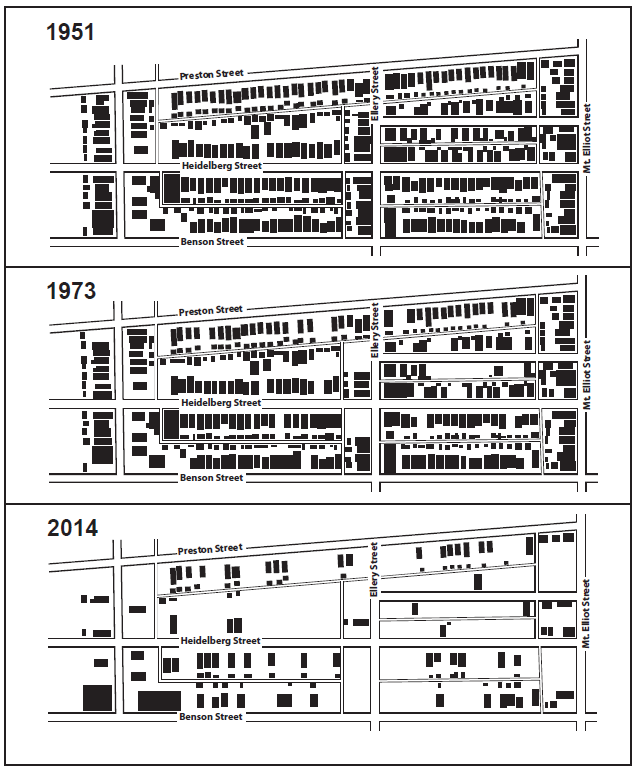 Note: (Building footprints were traced from the following maps: a. 1951: Sanborn Maps via the University of Michigan Library; b. 1973: Aerial photos via the Wayne State University Online Map Archive; and c. 2014: Google Maps).

Source: Geolytics Neighborhood Change Database
Notes:
i Position equals the EHLN rate relative to the growing city. The figures are classified as higher or lower, then further classified by the degree of difference. “Substantially” = +/-25 points; “Moderately” = 10-25 points; “Similar” = within 10 points.
ii Trajectory refers to the change in relative difference between 1970 and 2010. The figures are classified as “converging” or “diverging” (from the growing city figures, then further classified if they are “significant” = >10 points change).
iii Contract rent figures are for 1980-2010.

Why? Part of the answer to this question can be found in the aforementioned studies. They verify that vacant houses are indeed a negative force on nearby house values, but they also find that vacant lots are too—just less of one than a vacant house. City officials might make the situation less bad by demolishing a vacant house but short of some other intervention—e.g. building a park, housing, or commercial development on that site—property values will still fall in relation to healthier sections of town over time. Moreover, a cleared site almost never actually attracts the investor attention that a vacant house will. The estimated cost of building a new house to code is somewhere above $100,000 in the United States. The cost of renovating even the most charred shell of a house is unlikely to exceed $50,000 (unless you are forced to demolish it and start over). According to the 2014 American Community Survey, the median value of houses in the neighborhood of Mayor Duggan’s announcement was $52,600. Many houses in this, and other similar, neighborhoods are worth less than $10,000. Some are worth as little as $500 at the monthly tax auction. Unless a housing unit is heavily subsidized by the state, there is no reason an investor would sink, say $150,000 into building a house on a vacant lot in a distressed neighborhood. How would they sell it? How would they rent it for a value sufficient to cover their building expenses?

In my view, demolition-only is not the progressive effort to rebuild struggling cities it is being billed as. It represents a collapse of policy imagination, public resources, and serious concern for the underlying causes of blight. Whatever the intent of its proponents, the past 40 years have seen extensive house demolition in the region, and it has not spontaneously generated revival—it has just removed a large number of houses. Absent some other serious, affirmative intervention—probably delivered by the state—demolition-only urban policy has not, and will likely never, regenerate neighborhoods. It will simply replace vacant houses with vacant lots, and further isolate remaining residents.

This article is based on the paper, ‘Demolition as urban policy in the American Rust Belt’ in Environment and Planning A.

Jason Hackworth – University of Toronto
Jason Hackworth is a professor of planning and geography at the University of Toronto.  He writes broadly about urban political economy with a focus on North American cities.  He is author of two books, The Neoliberal City (2007), and Faith-Based  (2012), and numerous journal articles.  His current research focuses on the politics of land abandonment in Rust Belt cities.