It raises average vehicle occupancy, decreases the number of cars on the road and reduces car ownership, writes Yili Hong.

Digital platforms bring together buyers and sellers for transactions of various types. Such a platform economy has been booming over the last few years. Years ago, we witnessed the success of traditional platforms (e.g., eBay and Taobao) that facilitate transactions of physical products. We call these “Platform Economy 1.0.” More recently, new platform-based business models allow users to share almost anything, such as car rides (e.g., Uber and Lyft), unused room spaces (e.g., Airbnb and Couchsurfer), and even personal time (e.g., TaskRabbit, Postmates). We call this “Platform 2.0,” or the “Sharing Economy.”

The fundamental difference between the Sharing Economy and the Platform Economy 1.0 is the level of resource allocation efficiency. A sharing economy platform leverages information technology to re-distribute unused or under-utilized assets to people who are willing to pay for the services, therefore increasing economic efficiency. Uber, for example, has disrupted the traditional taxi industry; Airbnb has fundamentally affected the hotel industry. These creative business models have also received venture capital funding worth many times their projected revenues. People on both Wall Street and Main Street are left wondering why these new services merit such high valuations? While Uber and Airbnb offer convenient services at affordable prices, maybe there are also unintended benefits associated with these business models. 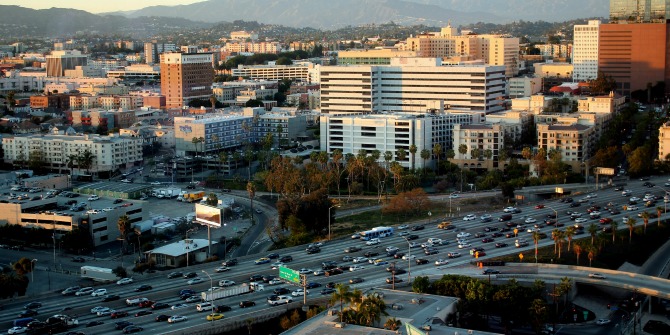 On first thought, there seems to be no apparent connection between on-demand ride sharing services and traffic congestion. It is probably fair to say that alleviating traffic congestion was not on the original business proposal or corporate agenda of Uber.

On a second thought, there may be reasons to believe that Uber could influence traffic patterns. In fact, this has been at the center of a debate among practitioners, policy makers and academics. Last year, one study from the New York Times estimated that Uber vehicles contribute to about 10 percent of total traffic in Manhattan during evening rush hours, but contended that it’s hard to measure the causal impact of Uber on the overall traffic increase. In a separate study, the Office of the Mayor in New York City released a report in January 2016 highlighting that the city mayor’s contention that Uber vehicles and other ride-sharing services had worsened traffic in Manhattan is unfounded.

So what is the takeaway from this heated debate? In a recent study, Ziru Li, Zhongju Zhang and I examined this question using a novel data set combining the entry time of Uber into various geographic regions and the traffic patterns from the Urban Mobility Report.

This paper’s research design features Uber’s exogenous entry into different urban areas at different points in time. For example, Uber first launched its service in the San Francisco area in 2011, it gradually expanded to other major cities around the United States. The differences in entry time allow us to use a difference-in-difference estimation method to infer the causal effect of Uber entry on traffic congestion.

Notably, we found that Uber’s entry to different major cities leads to significant decrease in traffic congestion of the urban areas where the cities belong to, and further, it reduces commuter stress and carbon dioxide (CO2) emissions that are both direct consequences of traffic congestion. We further proxied Uber entry with the popularity of ride-sharing services (measured with Google Search Trends of the keyword combination “Uber” + “name of the urban area”) and found consistent results.

So why has Uber alleviated traffic congestion? There are a few possible explanations.

The first reason, we surmise, is that ride sharing increases average per-vehicle occupancy, thereby decreasing the total number of cars on the road by having more than one person in the car. A recent survey found that occupancy levels for ride-sharing vehicles averaged 1.8 passengers in contrast to 1.1 passengers for taxis in a matched pair analysis. According to the International Energy Agency, adding one additional person to every commute trip could achieve a saving of 7.7% on fuel consumption and a reduction of 12.5% on vehicle miles.

Traffic congestion continues to be a serious societal problem with few effective solutions. Will the on-demand ride-sharing services help partially solve it? We believe the answer is yes, and we are excited to witness the Uber effect unfolds.

This article originally appeared at the LSE Business Review, and is based on the author’s paper Do Ride-Sharing Services Affect Traffic Congestion? An Empirical Study of Uber Entry, co-authored with Ziru Li and Zhongju Zhang (2016)

Yili Hong – Arizona State University
Yili Hong is an assistant professor of information systems at the W. P. Carey School of Business, Arizona State University. His research focuses on online markets and consumer uncertainty. His work has appeared in leading academic journals. He is the winner of the 2014 ACM SIGMIS Best Dissertation Award, runner up of the INFORMS ISS Nunamaker-Chen Dissertation Award and 2012 ICIS Best Paper Award. He received his Ph.D. in information systems from the Fox School of Business at Temple University.