For the past 14 years, the Federal government’s Healthy Marriage Initiative has sought to encourage marriage by helping couples develop relationship skills. While the program may have good intentions, in new research Jennifer M. Randles finds that many of the program’s components reinforce gender stereotypes about how men and women communicate and ignore how gender inequalities can influence power imbalances within relationships.

Since 2002, federal and state governments in the United States have spent over $1 billion from their welfare budgets on marriage and relationship education programs through the Healthy Marriage Initiative. This federal policy seeks to encourage marriage and the many social and economic benefits the government claims are associated with it—less poverty and domestic violence, better physical and mental health, higher academic achievement—by helping couples develop relationship skills focused on improving communication and resolving conflict. The federal agency in charge of overseeing healthy marriage funding recommends that curricula used in marriage education programs address how couples think about gender, specifically their beliefs about differences between men and woman and what they expect spouses to do based on gender. Many marriage education curricula address these topics because gendered expectations often influence how couples experience marriage and what they commonly argue about, namely housework, childcare, and earning money.

To understand how marriage education programs funded by the government teach about gender, communication, and power within marriage, I analyzed twenty curricula approved for use in healthy marriage programs and participated in a training session, workshop, or class for eighteen of these same curricula. I specifically wanted to know if and how the curricula reinforced or challenged stereotypes of gender responsibilities—such as the beliefs that women should be caretakers and men should be family breadwinners—and whether the programs taught couples about how social inequalities between women and men shape couples’ abilities to share power and family labor.

I found that some programs assumed men and women are fundamentally different in how they think, feel, and communicate, and recommended that couples use relationship skills to overcome these differences. For example, the Prevention and Relationship Enhancement Program, the most commonly used marriage education curriculum in healthy marriage programs, noted that men are more likely to pull away when couples argue, while women want to talk through disagreements. In discussing how women and men often act differently in romantic relationships, these curricula did not acknowledge how men’s greater power outside marriage often gives them more power to withdraw from conflict within it. Many of the other programs similarly presumed that heterosexual relationship dilemmas and romantic conflict arise from oppositional gendered communication styles. Numerous trainers described women as intuitive feelers who problem-solve through continuous talk, in contrast to men as rational thinkers who prefer to handle intimate challenges through direct action. Instructors explained that men tend to be emotionally stunted, less knowledgeable about emotions, and more likely to appreciate skills-based communication strategies that do not entail talking ad nauseam about feelings. The implication was that women have less power to pursue change in marriage, not because of institutionalized gender inequalities, but because they use the wrong talk-focused approach when initiating conversations about change.

Other programs, however, taught couples to question the belief that men and women are fundamentally different and to avoid gender stereotypes in expectations of how their spouses should think and act. The African American Relationships, Marriages, and Families curricula emphasized that gender stereotypes can be harmful to relationships and that couples should learn to be flexible when dividing work and care responsibilities. Another program, The Third Option, taught couples that they should “redefine the power struggle” within marriage by prioritizing cooperation over competition, as in a doubles game of tennis where spouses are on the same team. Other curricula even explicitly addressed patriarchy and problems that result from gendered power in relationships, namely domestic violence more commonly perpetrated by men against women. The Together We Can curriculum taught participants how to differentiate between controlling, abusive relationships and safe relationships where partners share power. By focusing on fairness, equality, and shared power, many of the curricula provided limited tools for challenging gender difference and power within marriage by teaching couples strategies that privilege individual abilities, inclinations, and availability regardless of gender. By offering couples a conceptual framework of marital behavior focused on fairness and equality, these programs also challenged the presumed naturalness and legitimacy of male authority and privilege within heterosexual relationships. 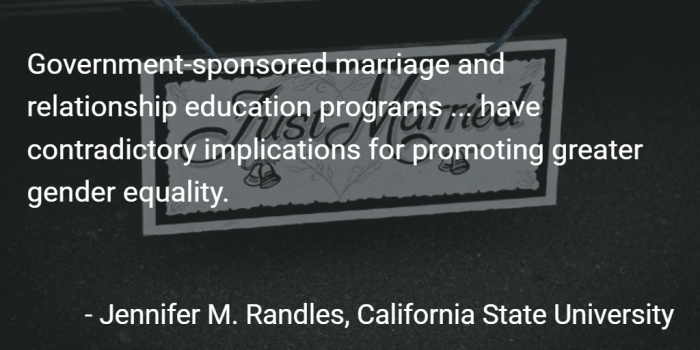 Nevertheless, the strategies for verbal negotiation taught by these programs did not address how gender inequalities—such as women’s overall lower pay—often create a power imbalance between husbands and wives tilted in favor of men, even when couples share egalitarian gender views. Gendered power exists in the broader society through unequal opportunities for women and men—or what sociologists call institutionalized gender inequalities—not just between two people in a couple. Government-sponsored marriage and relationship education programs therefore have contradictory implications for promoting greater gender equality. They encourage couples to question how narrow ideas of gender “roles” shape marital conflict and unhappiness. Yet, they are funded with money diverted from welfare programs that primarily support single mothers and children, while they teach that gender is a set of individual inclinations to be discussed and negotiated rather than a relationship of power connected to larger systems of inequality and state action.

As a case of what I call interpersonal gender interventions, healthy marriage programs focus on teaching individuals that gender equality primarily lies in developing and negotiating more egalitarian gender attitudes. Yet, interventions that promote ideas about equality will have limited utility if individuals learn to develop more egalitarian beliefs in the absence of institutional changes that enable them to act on these values. Policies need to do more than help couples redefine the marital power struggle through relationship skills; they must promote equitable access to education, employment, and stable earnings that allow partners to create fair, safe, and loving relationships. Only then will partners have truly equal power to express, pursue, and achieve their interests within marriage and family relationships.

This research was part of a larger project for which I observed over 500 hours of healthy marriage classes and interviewed low-income parents who took them to understand how relationship policy addresses inequality. The book based on this project, Proposing Prosperity: Marriage Education Policy and Inequality in America (Columbia University Press, 2017), takes the reader inside the marriage education classroom to show how healthy marriage classes teach about what I call skilled love as the essential link among marriage, financial stability, and upward mobility. Central to this message is the assumption that upward economic mobility is teachable and that romantic competence, well-informed intimate choices, and marriage can help disadvantaged families overcome financial constraints and deprivation.

However, the low-income couples I interviewed believed that marriage represents the culmination of prosperity, not a means to attain it. Couples told me they could neither afford nor prioritize marriage until they were more financially stable. Though parents frequently challenged instructors’ claims that marriage could help them, their children, and their finances, parents did find the classes useful. While couples’ economic challenges made it hard to practice the skills, participants experienced the classes as a rare opportunity to communicate free of the material constraints that shaped their daily lives and romantic relationships. Hearing other low-income couples talk about their challenges with love and money normalized parents’ intimate struggles and allowed them to better understand how relationship conflict and unfulfilled hopes for marriage are shaped by poverty.

This suggests that any policy with the goal of promoting family stability and equality must contend with the intimate inequalities that lead to curtailed commitments. It is misguided for policy to focus on teaching couples to communicate and budget more effectively without also addressing the outdated gender ideologies and growing economic disparities that can undermine their romantic relationships.

A version of this piece originally appeared at the Gender & Society blog and is based on ‘Redefining the Marital Power Struggle through Relationship Skills’, in Gender & Society. Readers may also be interested in Jennifer Randles’ new book: Proposing Prosperity? Marriage Education Policy and Inequality in America.