In new survey research covering 8,000 employees across eight countries, including Brazil, China, Japan and the USA, Sara Evans-Lacko and Martin Knapp find that between 0.1 and 49 percent of a country’s GDP is lost due to absenteeism and presenteeism in the workplace. They comment that workers from the USA and Brazil experienced the highest productivity losses due to presenteeism. In addition, workers from lower-GDP countries who did not disclose their depression to their employer, because they feared losing their job, seemed to be more impacted by presenteeism, in contrast to workers from higher-GDP countries, who were more likely to take time off work because of depression.

Depression is a leading cause of disability worldwide. Previous research has shown that by far the greatest contributor to the overall economic impact of depression is loss in productivity; including both increased absenteeism and presenteeism-related costs in the workplace. However, there is very little research on the costs of depression outside of Western countries and high-income countries. Using data from a survey of 8,000 employees across 8 countries spanning diverse cultures and levels of economic development, we found that workplace depression collectively costs almost US$250 billion. When analysing data from Brazil, Canada, China, Japan, South Korea, Mexico, South Africa and the USA, we found that between 0.1 percent and 4.9 percent of a country’s GDP was lost due to absenteeism and presenteeism in the workplace.

On the other hand, individuals in lower-income countries who fear disclosing their depression because they may lose their job may not feel comfortable taking time off of work. As a result, they may remain at work, but have lower levels of productivity, and this is reflected in their relatively lower levels of presenteeism. 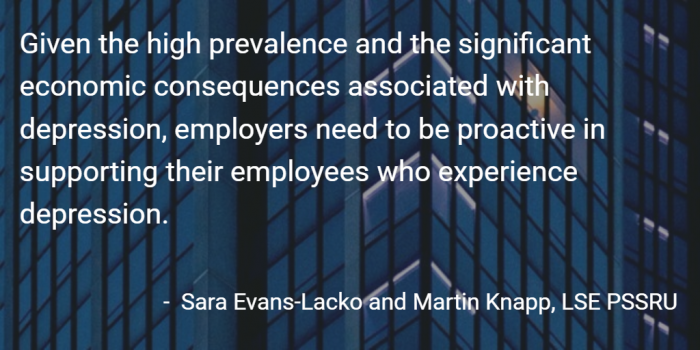 There were some other interesting country differences. For example, the USA and Brazil experienced the highest productivity losses due to presenteeism ($84.7 billion and $63.3 billion, respectively). Asian countries reported lower productivity losses due to depression, and this seemed to be attributable in part to a cultural reluctance to disclose mental health issues. Japan, however, had the highest aggregate costs associated with employees taking time off for depression and employees reported longer periods of absenteeism, with 22 percent (costing $14 billion) of people taking 21 or more days. This suggests that employees in Japan may have stayed at work longer until their depression became more severe.

Previous research which has examined the economic case associated with depression in the workplace has mainly been based in Western and high-income countries and so is not necessarily relevant for low- and middle-income countries or non-Western countries. Because we included nationally representative data from a diverse set of countries, in terms of both cultural factors and GDP, we were able to show that the impact of depression in the workplace is considerable across all countries and cultures, both in absolute monetary terms and in relation to proportion of a country’s GDP. Crucially, this means that depression is an issue deserving attention, regardless of a country’s economic development or culture.

Given the high prevalence and the significant economic consequences associated with depression, employers need to be proactive in supporting their employees who experience depression. Additionally, given the growth in non-communicable diseases globally—to which mental illnesses contribute substantially—the scale of the problem is likely to increase. However, many workplaces underestimate its impact.

There is evidence that workplace interventions focused on mental health promotion and treatment of depression can be cost-effective. Almost all of the evidence for these programmes, however, comes from high-income countries. And even in high-income countries, only a minority of companies participate in these programmes. Further attention needs to be given to develop, adapt, implement and evaluate effective programmes across workplaces, particularly in low and middle income countries in order to mitigate, the personal, societal and economic impacts of depression in the workplace.

This article is based on the paper, ‘Global patterns of workplace productivity for people with depression: absenteeism and presenteeism costs across eight diverse countries’ in Social Psychiatry and Psychiatric Epidemiology.

Sara Evans-Lacko – LSE Personal Social Services Research Unit
Sara Evans-Lacko is an Associate Professorial Research Fellow at the LSE’s Personal Social Services Research Unit (PSSRU). She is a mental health services researcher with a particular interest in the role of health services and social support in the prevention and treatment of mental illness. Her research focuses on developing innovative methods to improve access to and quality of mental health care for young people and cross-cultural applications of this in addition to the evaluation of public health interventions such as the Time to Change anti-stigma campaign which aim to improve important changes at the population level.

Martin Knapp – LSE Personal Social Services Research Unit
Martin Knapp is Professor of Social Policy and Director of the Personal Social Services Research Unit at the LSE. He has also been Director of the NIHR School for Social Care Research since 2009. His current research emphases are primarily dementia, child and adult mental health, autism and long-term social care; much of his work has an economic focus, and in all of it he seeks to tease out the policy implications.