The last decade has seen increasing concerns from those on the right over voter fraud, despite little to no evidence of such fraud actually occurring. In recent research, Brian J. Fogarty found no link between the amount of voter fraud and its coverage in local newspapers, and that battleground states and states that had recently passed restrictive voter identification laws saw a significant increase in voter fraud coverage.

Voter fraud and potential solutions to it (voter ID laws) have become increasingly important issues in US elections over the past decade. While in the past several election cycles conservative pundits and groups such as Hans Von Spakovsky and the Heritage Foundation worked to push voter fraud onto the election agenda, the 2016 election is the first time one of the major party presidential candidates in the modern era has openly and visibly discussed the possibility of voter fraud impacting election results.  Donald Trump’s recent statements on ‘needing to watch polling booths’ in parts of Pennsylvania and raising the issue at campaign stops increases the visibility of the issue and may undercut Americans’ trust in the electoral system.  Clearly, the re-invigoration of Trump’s fraud rhetoric is tied with his falling fortunes in the polls and poor election forecasts.  Thus, and as in the past several elections, one might believe this tactic is simply a way to increase white, Republican turnout; and potentially discourage minority voting.  The difference with Trump’s rhetoric is the suggestion that he might not accept the election results if he loses because of the belief in widespread voter fraud.  He already claimed the presence of fraud when he lost in the Iowa caucuses in February, but contending a rigged system exists in the general election is raising voter fraud to an entirely different level.

Political and social scientists have spent the past decade demonstrating the lack of actual voter fraud cases and the strategic use of voter fraud claims to increase Republican turnout.  Recent research has shown that voter identification laws decrease minority turnout; turnout which is mostly Democratic voters.  Research has also examined why many Americans continue to believe in widespread voter fraud.  This has shown conspiracy theory beliefs in voter fraud, particularly when voters’ preferred party or candidate loses, and differences among Americans based on views of immigration, partisanship, and race. 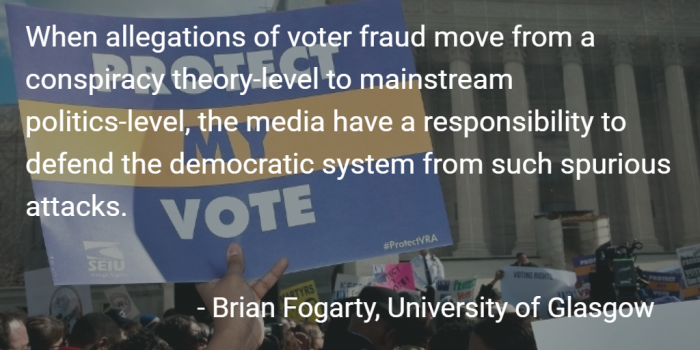 My colleagues and I’s research has examined a potential source for the disconnection between the existence of voter fraud and Americans’ widespread belief in voter fraud – the media.  In one study, we examined local newspaper coverage of voter fraud during the 2008 and 2012 presidential elections.  In both elections, we found that the number of voter fraud cases was unrelated to news coverage on fraud.  That is, evidence of voter fraud played no measurable role in whether fraud was reported on.  Instead, we found that during the 2012 election, battleground states and states that had recently passed restrictive voter identification laws saw a significant increase in voter fraud coverage.  Newspapers in battleground states were expected to have roughly 8 more stories on voter fraud and newspapers in states that recently passed restrictive voting laws were expected to have around 6 more stories on voter fraud during the election season.  This suggests parties and campaigns were able to place voter fraud on the news agenda despite having little to no evidence.  In doing so, Republicans in particular may have been able to increase Republican turnout and concern over voter fraud.

In a related paper, we examine the content of voter fraud news coverage during the 2012 elections.  We find the content of news stories heavily revolved around photo identification laws and their legality.  Several states (e.g., Mississippi and Texas) that has passed new laws were being challenged in court prior to the 2012 elections and thus the progression of those cases and whether the laws would be in place on Election Day were obviously newsworthy items.  However, as Jon Stewart notes, passing photo ID laws for voting is equivalent to ‘passing leash laws for unicorns’ – passing laws for non-existent problems.  We found limited indication that local newspapers discussed the lack of voter fraud evidence or the potential consequences from enacting voter identification laws; specifically, the suppression of minority voting.  For example, the term ‘Civil Rights’ was only the 13th most discussed phrase in context to statements on voter fraud.  In essence, our research shows that local newspapers allowed elite rhetoric to drive coverage on voter fraud over actual facts and spent minimal time discussing potential negative consequences of voter identification laws.

Elite US newspapers such as the New York Times and Washington Post have attacked and challenged the ‘myth of voter fraud’ in regular news stories and editorials during the past several election cycles.  In this election, rebutting Trump’s claims and suggestions has seemingly become a weekly event for such papers.  However, our research from past elections suggests this message is not filtering down to local newspapers – the place where most voters receive information about elections in their districts and states.  It may turn out impossible for newspapers and the media writ-large to challenge Americans’ beliefs on voter fraud given the current post-fact information environment.  However, when allegations of voter fraud move from a conspiracy theory-level to mainstream politics-level, the media have a responsibility to defend the democratic system from such spurious attacks.  Through a planned and concerted effort to refute voter fraud claims, the media may fulfil their role in the democratic ideal where the press hold officials and elites responsible for their actions and words.