The 2016 election has infiltrated almost all aspects of American life; popular music has been no exception. Diana Popescu recently attended the Desert Trip music festival in California, where artists like Roger Waters railed against the candidacy of Donald Trump, only to be rebuffed by many of Trump’s supporters that were present. She writes that performances – musical or otherwise – like these show how separate Democrats and Republicans have become, and that now more than ever, such forms of expression need to be capable of bridging political divides.

Of all reactions to all performances in all festivals, “We love Donald Trump! We hate crooked Hilary” shouted in protest at Roger Waters during his show at Desert Trip was particularly improbable. So improbable it seemed likelier to come from a random combination of its constitutive words than a deliberate assertion – much like those monkeys who, given enough time to play around with a typewriter, would ultimately produce a Shakespearean sonnet. And yet there it was, loud and proud, in the very middle of my enviable Grandstand section at the 3-day concert ending with Waters’ performance. Activism and references to the US elections were in no way lacking up to that point: The Who had made a reference to it earlier that very evening, and Neil Young had even anticipated Waters would talk about Trump’s wall, amid his own messages of environmentalism and First Nations rights. But these were subtle and not necessarily deliberately placed moments within performances designed to peak musically, not politically. Waters, however, is not a man of subtlety.

“It’s rare that someone like me gets a platform like this and I’m going to use it” Waters said that evening, and by the end it was clear what he meant. Political messages had been projected onto the gigantic screens from early on: “Black Lives Matter”; “I can’t believe I still have to protest this shit”; “We are Ferguson. We are Gaza because We are human”, among others. And yet, it was only in the second half that the politically-charged songs from Animals and The Wall started to be used like scarce didactic resources in a gigantic political installation: the stage was made to resemble London’s Battersea Power Station, complete with smoking towers. A bus-sized inflatable pig with Trump’s face and a skull with the words “Ignorant Lying Racist Sexist. Fuck Trump and his Wall” started hovering over the crowd, matching the Animals album cover as it reached the stage. At the same time, quotes from Trump and images of him wearing, among other things, a Ku Klux Klan hood were projected together with the word “Charade”, from the chorus of “Pigs”. “Trump is a pig” was also projected, to dispel all possible doubt.

It was around that time calls of “We love you Donald Trump” began, with the pig balloon still hovering over the diminishing crowd, as people had started to leave. As he began singing the first encore, preceded by a poem about ending the war in Gaza, a woman shouted abuse at the screen on her way out. Looking around I saw a middle aged man ask the person next to him in shock and disbelief “Are you…a Republican?” This matched my own shock at some attendees’ violent reaction to seeing the usual messages and hashtags from your run-of-the-mill Liberal Facebook wall projected onto a screen on a stage. Artistically, the Trump reference was at worst simplistic and exaggerated, at best an interesting illustration of the “Pigs” lyrics, yet it was met not with artistic dislike but with moral outrage. The liberal crowd was equally outraged. Murmurs and incredulous stares seemed to say: “Trump supporters, here? And why would they even come to see performers known for decades of protest, unless they’re completely missing the point?” The disdain for Trumpists and the disdain for fake fans merged into one distinct feeling you’ve been watching the show among peculiar life-forms for three whole days, a mix that also seems to characterise reactions to fans leaving a recent Amy Schumer performance due to anti-Trump remarks. 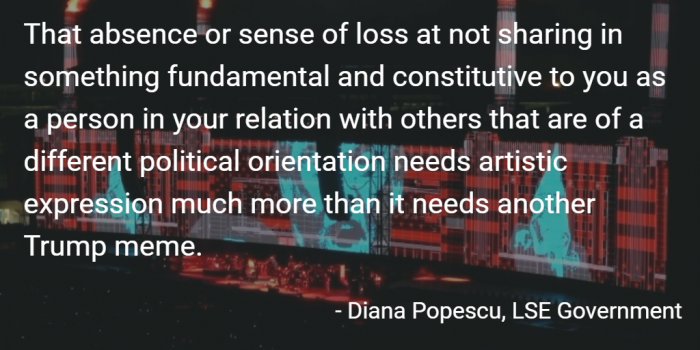 Ironically, the other side of the Trump pig balloon warned “Divided We Fall”, but the unity alluded to was not intended for Trumpists. Much like the concert itself, the “We” was rather selective. “Don’t be afraid to care”, a line from the opening song, had broken its initial promise of protection as far as Trumpists were concerned. With unfortunate timing, an image of two hands trying to reach each other, projected at various moments throughout the performance, showed them finally connecting as crowds flooded the exits in rage. While Waters had every right to speak his mind about such matters, doing so by demonising Trumpists was ineffective if his real purpose, as a friend suggests, was to use his authority to awaken them to the truth, converting them.

Water’s failure here is an instructive one, fitting a more general pattern of liberals appealing to an authority the other side does not recognise, and in so doing losing their own. The result, made real by the end of the concert but visible on a much wider scale, is the mutual excommunication of each party by the other. This is the case not only in the American context and not only for this concert, but in many deeply divided societies where the political becomes the personal in ever more pervasive ways. Instead of enabling situations where Democrats and Republicans attend different concerts, watch different TV packages, and generally lead separate, never touching lives, it is increasingly important to build on common ground of the kind that had brought Democrats and Republicans alike to the concert in the first place. Using music to deliver the explicit conclusions of an argument rather than to create a shared experience in which these conclusions are facilitated makes music one more way of rejecting someone as a person based on their beliefs as a citizen. If music be the food of politics, as Waters at least thinks it should, populism and the cleavages it creates makes forms of expression capable of bridging divides and opening each party to the other’s point of view more necessary than ever. For music to be successful politically, in current conditions of populism and division, it needs to remain personal and focused on warming people up to your side’s premises rather than hitting them with your conclusions. Parading Trumpists to publicly shame them, as Amy Schumer did, is equally self-defeating.

Waters’ performance was a missed opportunity for bridging divides. Just among the songs from the concert, the message of absence in “Wish you were here”, of accepting flaws as part of being human in “Us and Them”, of sympathy for someone you’ve lost contact with in “Shine On You Crazy Diamond”, could have been the source of some much needed shared experience which could facilitate mutual understanding – yet they were not emphasized. Trumpists, racists, xenophobes are not just flawed citizens voting irresponsibly, but people many of us interact with as family or friends. That absence or sense of loss at not sharing in something fundamental and constitutive to you as a person in your relation with others that are of a different political orientation needs artistic expression much more than it needs another Trump meme. Waters did nothing to break the self-reinforcing and self-congratulatory loop that exists on both ends; he fed it and fed on it. Yet, for better or worse, he did break that famous wall between himself and his audience with results ranging from the Republican’s “warm thrill of confusion” to the Democrat’s “space cadet glow”.

Diana Popescu – LSE Government
Diana Popescu is a doctoral candidate and Fellow in Government at the LSE. Her research is on theories of justice, discrimination, social exclusion and the Romani minority in Europe.