When advocacy groups for the poor are stronger, it’s more likely that a state will have more generous welfare programs.

When advocacy groups for the poor are stronger, it’s more likely that a state will have more generous welfare programs.

Despite state and federal government programs, poverty remains a persistent problem in the US. But what determines what type of policies – punitive or supportive – that states implement to tackle poverty? In new research which examines the relationship between states’ advocacy communities and their welfare policies, Robin Phinney finds that those with more and stronger advocacy communities are less likely to adopt policies that restrict welfare benefits, and more likely to have policies that mean that people are more eligible for welfare programs.

In one of the richest nations in the world, poverty remains a persistent problem – more than 43 million people live in poverty in the United States. Public policies designed to address poverty vary dramatically across individual states; while some provide considerable cash assistance and services for people living in poverty, others offer only meager forms of support. What factors explain disparities in state social policy? In particular, do differences in anti-poverty advocacy help explain why some states have generous social programs while others do not?

Although many state-level advocates exist, scholars know surprisingly little about their policy influence. Indeed, most research assumes that such groups have a limited role in the policy process. Yet in new research, I find that the strength of a state’s advocacy community does explain its welfare policy choices. My work shows that states with stronger advocacy communities are less likely to adopt policies that restrict welfare benefits, as well as policies that enhance eligibility for welfare programs.

Organized interests are a ubiquitous presence in state politics. Tens of thousands of groups lobby at the state level, in policy areas as diverse as education, health, manufacturing, and the environment. While lobbying communities differ in size and scope across states, most organizations represent well-financed economic or professional interests – corporations such as General Mills or professional groups like the Minnesota Association of Realtors.

Relatively few lobbying organizations represent the interests of low-income populations. The political groups that do exist are disadvantaged in many respects, with limited financial resources and few active members. State officials motivated by reelection have few incentives to champion the policy interests of such groups. Thus the conventional scholarly wisdom holds that advocates for low-income populations have limited influence in state policymaking processes.

There are several reasons to challenge the prevailing view. Though they lack the large budgets of corporations, groups that advocate for the poor possess valuable expertise about the needs of the poor and the implementation of existing government programs. People living in poverty are also represented by non-political groups, such as nonprofit service providers and religious organizations. In addition, case studies indicate that advocates for low-income populations are active and influential in the policymaking process at both national and state levels. 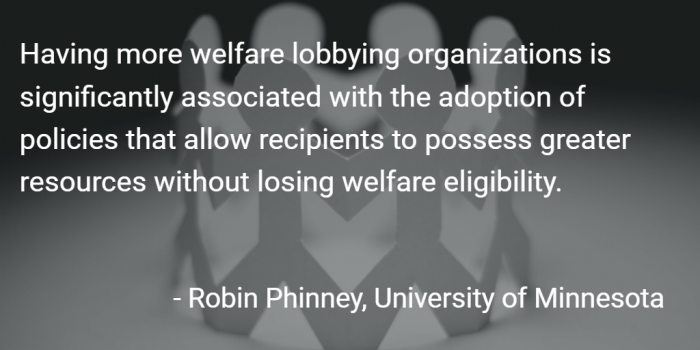 The fact that many different types of advocates are politically active, have expertise that is valued by policymakers, and are cited as influential in the policy process suggests that advocates may play a larger role in state policymaking processes than existing research suggests. Yet no studies have systematically examined the relationship between advocacy and social welfare policy across all fifty states.

In my new research, I examine the relationship between the strength of a state’s advocacy community and a set of welfare policies enacted in the late 1990s. I measure strength as the number of advocates within each state. In states with larger advocacy communities, advocates have more points of access in the policymaking process and are better able to engage in the many activities associated with policymaking, such as participating in working groups, contacting state policymakers directly, or testifying in legislative hearings, relative to a single organization. Having more advocates also creates opportunities for collaboration, which is among the most common activities of groups engaged politically on behalf of the poor.

I develop two distinct measures for state advocacy community strength. The first, which draws upon a well-known dataset of state lobbying registrations, identifies those state groups registered to lobby on the issue of welfare in 1996. The second draws upon federal tax records and identifies charitable service providers active on welfare-related issues in 1996. The measures reveal considerable variation across states with respect to size of advocacy communities. While some states, such as California and Minnesota, boast large lobbying and charitable service communities, others, such as Alabama and North Dakota, have relatively few organizations active on behalf of the poor.

I examine a set of state policies that were enacted following the passage of a large-scale, national welfare reform act. This act dramatically altered the program of cash assistance to low-income families and gave individual states more discretion over multiple elements of the welfare program. I looked at several different types of welfare policies, including those imposed strict requirements or penalties for noncompliance with welfare program rules (punitive policies), as well as those that offered resources and support to welfare recipients as they transitioned into employment (supportive policies).

My analysis shows that the strength of a state’s advocacy community is related to several of its welfare policy choices. Controlling for other characteristics of a state, having more welfare lobbying organizations is significantly associated with the adoption of policies that allow recipients to possess greater resources without losing welfare eligibility, as well as policies that impose sanctions for failure to comply with program rules and impose strict work requirements. Notably, only the size of the lobbying community emerges as a significant predictor of policy choice. The strength of charitable service providers is not related to welfare policy choice.

The relationship between advocacy community strength and policy choice is not consistent across policies, however. A significant relationship exists for only three of the eight welfare policies examined: sanctions, work requirements, and asset limitations. In addition, the strength of advocates does not emerge as a significant predictor when such policies are grouped into “sets” of punitive and supportive policies. Such findings are consistent with prior work on the predictors of state welfare decisions, in which the predictive power of political, economic, and constituent factors varies across discrete policy choices.

Yet the evidence of a relationship between a state’s advocacy community and a subset of welfare policy choices is a novel finding that draws into question conventional scholarly wisdom. Such a finding suggests that the strength of advocates may be related to state policy choice. The lack of a consistent pattern across all policies examined calls for more research on the topic. Indeed, future research examining the consequences of advocacy may prove a fruitful path of inquiry for scholars interested in state-level policies targeting America’s least advantaged citizens.

This article is based on the paper, ‘Advocacy for the Poor: Organized Interests and Social Policymaking in the American States’, in American Politics Research.

Robin Phinney – University of Minnesota
Robin Phinney is a Research Associate in the Department of Political Science at the University of Minnesota. Her research focuses on American politics and public policy, with an emphasis on interest groups and social movements, the policymaking process at state and national levels, social welfare policy, and the well-being of low-income families. Her forthcoming book from Cambridge University Press examines collaboration among organized interests in social policymaking in the United States. She is currently working on several new projects involving interest group collaboration in American national politics and residential mobility among low-income families in the United States.