As part of our series covering key Senate races in the 2016 election, Tom Sutton and Barbara Palmer take a close look at Ohio’s election, where former Governor Ted Strickland is challenging the incumbent Republican Senator Rob Portman. While Portman was initially considered to be vulnerable, he is now nearly 15 percentage points ahead of Strickland, a lead which may be down to the GOP Senator’s superior fundraising and the funding of attack ads by outside campaign groups.

Ohio, the ultimate battleground for presidential races, has been the setting for a remarkably mundane race for the US Senate. Dominated in statewide campaigns by successful Republican candidates, currently all Ohio statewide officeholders, with the exception of US Senator Sherrod Brown (D) and one state Supreme Court seat, are held by Republicans, as are twelve of its sixteen US House seats.  However, early in the 2016 election cycle, Democrats targeted incumbent Senator Rob Portman (R) in their quest to regain a majority in the US Senate.  Portman, running for his second term, was initially deemed vulnerable, facing former governor Ted Strickland.

Portman began the 2016 race with middling approval ratings and low name recognition, despite having served for five years in the Senate. Prior to that, he was Director of the Office of Management and Budget and US Trade Representative in the George W. Bush administration, which in turn had followed six terms as a US House member from the Cincinnati area.

Strickland is also a former member of the US House (he and Portman actually served together) and was elected governor of Ohio in 2006 but was defeated by John Kasich in 2010.  Strickland quickly became the endorsed candidate for the Ohio Democratic Party for US Senate in 2016, believing that his experience, name recognition, and moderate record in Congress and as governor would appeal to independents and moderate Republicans.  Strickland also had close ties to the Clinton campaign, which was expected to be a plus factor in the campaign.

The race was competitive through mid-July, with the candidates each at about 40 percent support.  Portman began to pull ahead after the Republican National Convention, getting a slight bump to a three point lead.  Ironically, Portman’s lead grew more after the Democratic National Convention, and continued to build unabated to a double digit lead in early September.  As of October 31st, he was 14.5 points ahead of Strickland (51.3 percent Portman, 36.3 percent Strickland).  How did Portman build such a lead in the space of two months?  The answer lies in campaign spending, a weak campaign by Strickland, and an effective text-book campaign strategy by Portman. 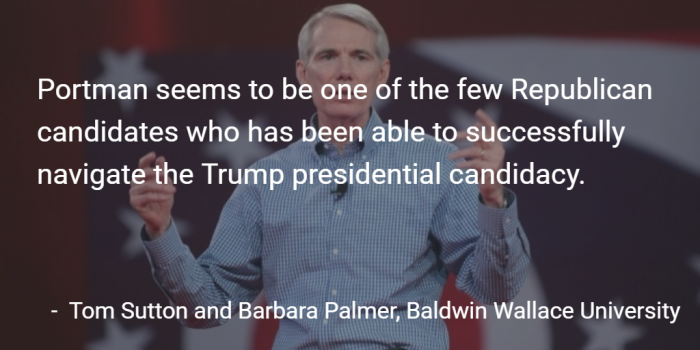 However, the broader fight for control of the Senate has attracted outside funding for both campaigns, pushing the Ohio race to break records for campaign spending in the state.  An additional $35.6 million has been spent by groups supporting Strickland, and $15.4 million more by groups supporting Portman.  The largest amounts came from the pro-Democrat Senate Majority PAC ($9.5 million) and the pro-Republican Freedom Partners Action Fund ($9.4 million).  Major contributors to these funds include billionaires George Soros and Charles and David Koch.  The combined totals initially made for a much more competitive race, with funds for Strickland at $45.6 million, and $39.8 million for Portman.

Over 46,000 TV ads for the Ohio Senate race have aired, the most of any Senate race, and 88 percent of these were funded by outside campaign groups.  Advertising against Strickland appeared to be more effective, focusing on the loss of 350,000 jobs during his term as governor.  Despite the fact that this was during the Great Recession, when millions of jobs were lost across the country, the negative attack resonated with Ohioans, who have also been attracted to the pro-jobs, anti-free trade positions of the Trump campaign.  In another irony, Portman, despite being a free-trade advocate and former US Trade Representative, came out against the unpopular TransPacific Partnership (TPP) trade agreement.  Pro-Strickland groups and the Strickland campaign have focused on Portman’s support for NAFTA and claims of 320,000 manufacturing jobs lost since the 1993 agreement, but to little avail.

When Portman’s lead grew in September, contributors on both sides pulled back.  The Freedom Partners Action Fund cancelled $3 million in ad buys, confident that Portman’s campaign had a comfortable lead.  The Senate Majority PAC (supporting Democratic candidates) cancelled $2 million in ad buys, redirecting funds to other tight Senate races.  The Strickland campaign pulled all ads out of 10 of the 12 TV markets in Ohio in mid-September, which meant reliance on free media coverage of live events.  Given these developments, it is little wonder that Ohio is no longer a competitive Senate race.

Strickland has tried to attack Portman by associating him with Donald Trump’s presidential campaign, but this also appears to have been ineffective.  Portman seems to be one of the few Republican candidates who has been able to successfully navigate the Trump presidential candidacy.  Portman initially endorsed Trump, but has never appeared with him publicly and never mentions him on the campaign trail. Portman then withdrew his endorsement October 8th after release of the 2005 video of Trump’s derogatory, sexual comments about women. The most recent polls have Ohio as a toss-up in the presidential race, but give Trump a slight edge, suggesting that many voters will be splitting their tickets, given Portman’s large lead.

Tom Sutton – Baldwin Wallace University
Dr. Tom Sutton is professor of Political Science at Baldwin Wallace University and holds the Burton D. Morgan Chair in Entrepreneurial Studies.  He is director of the Community Research Institute, which conducts public opinion surveys for government and nonprofit agencies and media organizations. Dr. Sutton serves as a political analyst for WEWS Newschannel 5, the local ABC affiliate, as well as providing elections analysis a variety of national, state, and local media, including the NPR affiliate WCPN 90.3 FM and The Plain Dealer.