The past five decades have seen community based nonprofit organizations become an integral component of urban policy, a trend which has been accelerated by the growth of public-private partnerships. In new research using fieldwork in Boston, Massachusetts, Jeremy Levine finds that in some poor urban communities, nonprofits are actually taking the place of elected officials as legitimate community representatives. While this move towards private political representation means that urban policymakers need to reconsider how neighborhoods are represented and gain access to resources, they also raise questions of accountability.

Since the War on Poverty in the 1960s, nonprofit community-based organizations (CBOs) have become a central feature of US urban policy. CBOs are often responsible for developing and managing affordable housing, planning economic development projects, and providing social services and job training programs. In short, the growing reliance on public-private partnerships means that CBOs have become necessary for poor neighborhoods to acquire resources.

Yet these organizations’ responsibilities do not end with implementing projects or programs. While tax exemption restricts nonprofits from participating in partisan electoral politics, existing research nevertheless suggests that CBOs take on important political roles in urban governance. Some scholars think of these organizations as third-party arms of government—essentially, extensions of the welfare state. Others consider them akin to interest groups, advocating for the populations they claim to represent. Still others depict them as political machines, providing elected officials with reliable voting constituencies in exchange for officials’ influence over government grants and contracts.

I developed this argument after spending four years observing nine CBOs that plan community development projects in Boston. I gained unique access to these organizations’ private meetings where they discussed their political strategy and negotiated for resources. To better understand how other organizations view CBOs’ role in urban governance, I also spent ten months working in Boston City Hall and a year working as a consultant for a local foundation.

An example from my fieldwork helps illustrate my central argument. On a rainy night in September of 2011, the City of Boston and a local nonprofit co-hosted a public meeting. The topic of conversation was the conversion of a vacant city-owned lot into a small, half-acre urban farm in the low-income neighborhood of Four Corners. A couple dozen African-American residents sat in rows of plastic chairs and listened to a presentation by the company that had submitted a bid to redevelop the property.

About 45 minutes into the meeting, City Councilor Charles Yancey, a 15-term African-American Councilor, entered the room and sat in the audience. Councilor Yancey was the first to speak when the question-and-answer period began. He stood up from his seat, moved to the front of the room, and expressed concerns about environmental hazards associated with construction. He then questioned the very legitimacy of the project. “The project was imposed on the community,” he declared, “top down.”

After a few minutes, Marvin Martin, the nonprofit director moderating the meeting, walked up toward Yancey from behind. He tapped the city councilor on his shoulder and started whispering in his ear. When he finished, Councilor Yancey abruptly sat down. “I’ve been informed that I’ve overstayed my welcome,” Councilor Yancey announced. “In my own district.”

A few minutes later, after other questions had been answered, Yancey’s assistant asked a follow-up about community support for the project.  An African-American city official responded, but he responded by deferring to Marvin, the nonprofit director. “I’m asking the City,” the assistant retorted.  “I’m not asking Mr. Martin, with all due respect.”

The official shot back: “Mr. Martin is part of the conversation though. Because he runs…the local community group in the area.”

“Excuse me,” Councilor Yancey interjected, standing back up. “But I represent the community. And am elected. And I think that question should be answered.” 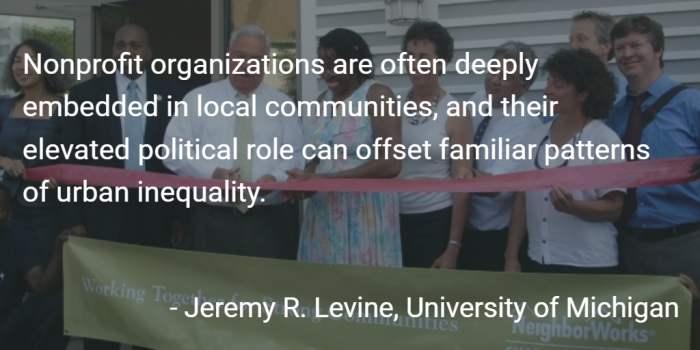 Marvin, who was now standing in the front of the room, thanked Councilor Yancey for his commitment to the neighborhood, but he assured the City Councilor—and everyone else in the room—that his organization would take responsibility and represent the neighborhood, should any issues arise. A community organizer with the nonprofit, who was standing in the back of the room, called out, “Let us do our jobs.” Councilor Yancey sat back down, and the meeting ended shortly thereafter.

What happens when a neighborhood loses its CBO representative? Halfway through my fieldwork, the Mattapan Community Development Corporation—or Mattapan CDC for short—filed for Chapter 11 bankruptcy protection. It was a major blow to the neighborhood. Boston’s chief of housing told a reporter from the Boston Globe at the time, “In Mattapan, the big problem we have is that they are the only game in town. It’s a big loss.”

Funders and government officials scrambled to find a replacement presence in Mattapan, quickly settling on two elected state representatives. Public-private partnerships, however, require CBOs to implement community development projects, and so the two state representatives were unable to take advantage of resources earmarked for Mattapan. The flow of resources to the neighborhood stalled.

These findings push our understanding of CBOs and urban governance forward in two ways. First, when we think of CBOs as nonelected neighborhood representatives, it forces us to look beyond elected officials or formal bureaucracies and consider the private forms of political representation in cities. Second, given the reliance on public-private partnerships in US urban policy, the presence (or absence) of these nonelected neighborhood representatives directly affects resource availability in poor neighborhoods.

In some ways, this is a positive development for poor neighborhoods: nonprofit organizations are often deeply embedded in local communities, and their elevated political role can offset familiar patterns of urban inequality. But in other ways, this is a troubling shift: nonprofit leaders are not elected and cannot be held accountable with the same sorts of democratic checks and balances that we place on elected politicians.

As such, my research uncovers an important tradeoff between the urban poor’s access to resources and the ability to hold their leaders democratically accountable—a tradeoff that will remain so long as governments continue to rely on private actors in public governance.

This article is based on the paper, ‘The Privatization of Political Representation’, in American Sociological Review.

Jeremy R. Levine – University of Michigan
Jeremy R. Levine is an Assistant Professor of Organizational Studies at the University of Michigan. He received his PhD in Sociology from Harvard University. His research investigates urban inequality from a variety of theoretical angles and with a wide range of analytical approaches. Currently, he is completing a book manuscript on the transformation of urban governance and neighborhood redevelopment in Boston.