Last night Donald Trump won the US presidential election in a shock upset, defying both the political establishment and the pollsters. Here, the US Centre’s Nicholas Kitchen reflects on what this means for American foreign policy, and global reactions to these developments.

For the last six months I’ve been asked: what would a Trump presidency mean for American foreign policy? And I’ve always given the same answer: “we just don’t know, but don’t worry, because he’s not going to win.”

I’m not the only political scientist coming to terms with being seriously wrong about the outcome of this election. Again, our data was seriously flawed. But that’s a problem for the future. This morning, foreign ministries around the world will be trying to work out how to respond to a Donald Trump foreign policy, and the problem they will be facing is that we just don’t know what that will look like.

There are two reasons for this. First, the nature of Trump’s campaign, and his lack of experience, means that we are very short on both policy specifics and a prior record. All we have on Trump is rhetoric that was often contradictory and designed to whip up a partisan base; it was noteworthy how lukewarm the reception in the room was to his attempt at a conciliatory and unifying acceptance speech. Second, Republicans in Washington now have a choice to make about whether or not to take positions in his administration; so many were strongly against their candidate that the make-up of Trump’s foreign policy team – both at senior and more junior levels – is highly unclear. 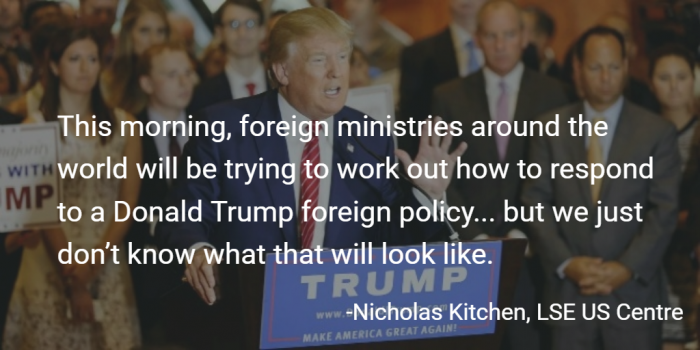 So how are other countries likely to prepare? Well first, they should reassure themselves that international politics is not all about leaders. In the agent-structure debate, structure wins out a lot of the time. American interests in the world don’t change overnight. Even if Trump wanted to revolutionise American foreign policy, major strategic shifts are hard to achieve and it takes time to turn around the ship of state.

That said, policies matter, ideas matter, and statespeople matter. It matters who the President is, and it matters if you don’t know – or are concerned about – their likely approach. So states will hedge. Allies who were questioned as free-riders during the campaign will be seeking assurances from Trump’s transition team, but they’ll also be dusting off old plans – or desperately trying to come up with new ones – for a world in which they cannot rely on American security guarantees.

We can all fill in the gaps in terms of what that might mean in particular cases, but I would reiterate that radical change is unlikely, and that such explorations are only prudent. But it will invite other states to think about a post-American world, and how they might structure their relations in it. If anarchy is what states makes of it, then strategic rethinking may be the source of real change. Charles Krauthammer noted not so long ago that “decline is a choice”. His target was the Obama administration; the irony is that the election of Donald Trump may have taken that choice out of the United States’ hands.