While many argue that Trump owes his victory to those living in poverty and political exclusion, Rajesh Venugopal of LSE Development argues that this race was about race- while being poor was a contributing factor to who people voted for in this election, voting for Trump had more to do with being white than those other factors.

Was Donald Trump’s victory a revolt of the poor against the rich? Was this about globalisation and out-of-touch elites? As with Brexit, people are struggling to find explanations for the shocking outcome on November 9 and one thing that they are now repeatedly being told by their TV sets is that this was about class and a dispossessed majority.

Academics, pollsters and pundits are all explaining how the new right-wing populism that brought Trump to power is because of those left behind by globalisation. The argument is that people who endured de-industrialisation, impoverishment and political marginality have finally fought back. The dispossessed and disempowered, who were ignored and sneered at, have now dethroned the political elite.

There is much that rings true in this argument – in the last two decades, economic globalisation and the centrist political consensus has led to the un-mooring of the Democratic Party from its traditional base and allowed right-wing demagogues to step in and speak for the poor. It was the deep anger in the rusted hull of the formerly industrial heartland – Michigan, Ohio, Pennsylvania and Wisconsin – that has, as Michael Moore describes, been decisive in tilting those key states to Trump.

The idea that the Trump phenomenon is primarily about class makes us understand it in a particular way. It conveys the sense that behind the anti-immigrant rhetoric and the racism of his campaign, the real underlying draw was his appeal to those living in poverty and political exclusion. Racism was just the medium through which it was expressed. If this argument were to hold – and it is all about those who got left behind and lost out from globalisation– then it also opens to speculation the possibility that progressive populist Bernie Sanders could have done better.

But the problem is that the data just doesn’t support this analysis. It is simply not the case that Trump won because the poor and dispossessed voted for him. That may be how people explain their decisions to themselves and to others, or the way that the new demagogues represent their political movement – that they are fighting to take their country back for the people from the corrupt elite. But the underlying patterns and evidence expose a different reality.

First, the idea that Hillary Clinton’s campaign failed is misplaced as she actually won the popular vote. With a 1.7 million popular vote majority, she evidently connected better with the voters than Trump did. Hillary Clinton lost the election due to the distortions of the US electoral college system that greatly magnifies the votes of some – such as those four rust belt states – to such a disproportionate extent that it has tipped the result the other way. 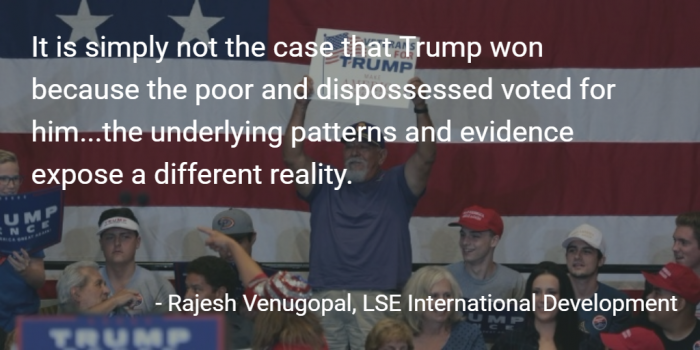 Second, even in terms of understanding the role of class in the election, the less well-off voted for Clinton and the wealthier for Trump. Of those earning under $50,000, Clinton was significantly ahead while those earning over $50,000 were more likely to vote for Trump. Of course, this reflects the fact that non-whites are disproportionately poorer – but this complexity and overlap between race and class is at the heart of understanding why the idea of an economic anti-elite revolt, is incomplete, if not misleading.

Third, race – and not class – was the most reliable explanatory factor behind voting choice on Tuesday. CNN exit poll data shows that 58 percent of whites voted for Trump and 74 percent of non-whites voted for Clinton. Whites with lower income and education voted for Trump over Clinton – but so did better educated and wealthier whites. Astoundingly, white women voted with a huge margin of 53:43 for Trump, as did white voters across the board. Poor rust belt whites voted for Trump – but so did non-poor and more educated whites in the rust belt, as did poor whites outside the rust belt. Being poor was a contributing factor to who people voted for in this election, but overall, voting for Trump had more to do with being white than those other factors.

This race was determined by race. Class, gender, or education were not unimportant – because they did inflect the outcome, but not to the same extent as race did. Race also doesn’t necessarily mean racism. Comparisons are odious and hypothetical counterfactual projections are worse – but under this logic of voting, it appear less likely that Bernie Sanders would have done any better than Hillary Clinton – unless perhaps he improved the turnout.

Economic deprivation and an anti-elite revolt may well have played a role in the election. But they do not add up as adequate explanations for the outcome, and not even in the direction of causality that is suggested. It wasn’t the wretched of the earth who fought back against the elite and carried the election. If anything, it might be the opposite –the wealthier fought to keep the wretched in their place.

A version of this article originally appeared at The Wire.