This week president-elect Donald Trump picked billionaire conservative activist, Betsy DeVos to be his Secretary of Education. Ursula Hackett writes that Trump’s choice shows that he is serious about implementing a radical new program of school vouchers, which would expand the role of the market in the US education system even further. She comments that while Trump’s plan to expand private school choice at the federal level may encounter some legislative and judicial speed bumps, the soon to be restored conservative Supreme Court majority will likely to be receptive to it.

We learned this week that Betsy DeVos, billionaire conservative activist and school choice champion, will head President Trump’s Department of Education. Her appointment signals that the new President is serious about his signature education proposal: a vast school voucher programme to provide all parents with a sum of public money to spend on their children’s education at any school, including private religious institutions. If enacted, this would be the biggest shakeup in the history of American education. A radical injection of market forces, elevating parental choice, expanding funds available to religious institutions and corporate heavyweights, and breaking the links between local communities and public (state) schools. Supporters of the public system are terrified, and rightly so.

We must understand the President-elect’s promise in light of the Obama administration’s policymaking in education. President Obama is a fierce critic of school vouchers and an enthusiastic supporter of charter schools (publicly-funded but privately managed schools, similar to English academies). But it is not the content of Obama’s education agenda that matters so much as the way he and his Education Secretary Arne Duncan have pursued their objectives.

When Obama came to office federal education law was overdue for reauthorisation. The old law, known as No Child Left Behind, defined success as 100 percent proficiency by ALL students before 2013, mandating punitive, costly responses from states that failed to reach this impossible target. As the 2013 deadline drew closer states clamoured for relief from the law’s mandates. The Obama administration spotted an opportunity. States could bid for individual waivers from these mandates in return for signing up to the administration’s education objectives (reforms to curriculum standards, teacher evaluations etc). States that signed up to these waivers received desperately-needed cash. But transgressors were thrown back on the punitive old regime. In the short-term, this carrot and stick approach produced amazing results for the administration: widespread reforms to teacher evaluations and curricula, and expansion of charter schools. But a backlash quickly developed, and it is this backlash that provides both the greatest hope and the greatest danger for Trump and DeVos’s voucher program.

The hostile response was manifested in two main ways. First, an explosion of private school choice initiatives at the state level. Perhaps seeking to circumvent Obama’s agenda respecting the public schooling system, many Republican states passed private school voucher programs. The numbers were unprecedented. Although vouchers had existed before (mainly in mid-twentieth century southern states seeking to provide white families a way to avoid desegregation of the public school system) most of these had been struck down by courts.

As Figure 1 shows, the number of voucher programs ticked up steadily during the second Bush administration but went into overdrive around 2010, when the Obama administration first rolled out its education efforts. Advocacy groups such as Betsy DeVos’s American Federation for Children egged on these state voucher efforts. Seen in light of state-level activism, Trump’s voucher agenda is just another manifestation of this backlash against his predecessor. DeVos’s many successes at state level may presage similar success at the federal level. 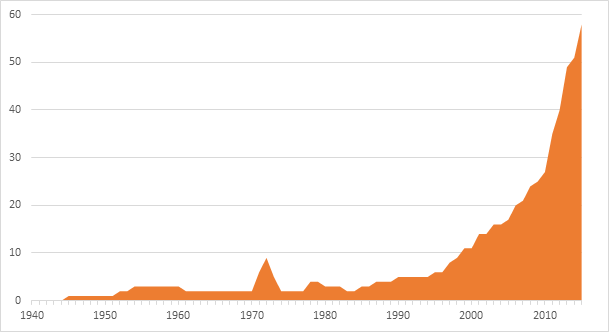 However, a second backlash against the Obama administration’s carrot-and-stick approach threatens to derail Trump and DeVos’s efforts: the new federal education law, passed in late 2015, explicitly prohibits any future administration from doing what Obama and his Education Secretary Arne Duncan have done for the past seven years – that is, exert federal control over states in education policy by means of conditional grants or waivers. This ‘secretarial smackdown’ radically reduces the ability of the President and his Education Secretary to control education policy. It repatriates power to states and localities. And it makes Trump’s proposal – to pursue private school choice at the federal level – more challenging.

There are other barriers to the expansion of vouchers, notably the existence of so-called ‘Blaine Amendments’ or ‘No-Aid Provisions’ in forty state constitutions that prohibit the use of public money to aid religious institutions. As Figure 2 shows, around 8 in 10 of American private schools are religious, so any school voucher programme must deal with the prospect of court challenge on the grounds that it unconstitutionally siphons public money to religious schools.

Figure 2 – Composition of the private schools sector in the United States (2011), by religious affiliation 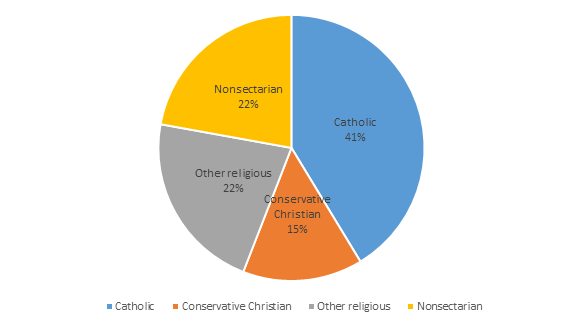 But can opponents of voucher programs rely upon such provisions to block Trump’s voucher plans? My research suggests not, for three reasons:

First, prominent conservatives, including Supreme Court Justice Clarence Thomas, have discredited No-Aid Provisions on the grounds that they were created in the late nineteenth century to stop Catholics accessing school funds, to impose Protestant practices, and to tap into nativist bigotry. Indeed, strictly-worded No-Aid Provisions were passed more frequently by states with large Catholic populations but there was no consistent connection between No-Aid Provision passage and anti-Catholic animus per se. Regardless of the facts of the matter, the pervasive narrative that No-Aid Provisions are discredited because of their origins can only weaken their power as barriers to private school choice programs.

Secondly, if a school voucher program is challenged in court, one of the key predictors of whether the court strikes it down as unconstitutional is not the existence of a No-Aid Provision but the presiding judge’s partisan affiliation. Republican and Republican-appointed judges are less likely to strike down school choice programs than Democratic judges. That relationship has held true for a century. The Obama-appointed federal judiciary might not be well-disposed to Trump’s voucher plan, but conservative judges and justices (including the soon-to-be-restored conservative majority on the Supreme Court) are likely to be receptive to it.

Thirdly, the newest (and fastest growing) types of school voucher program utilise what political scientist Suzanne Mettler calls ‘submerged’ mechanisms for policy delivery: strategically deploying private organisations and the tax system to administer and fund social policy. ‘Tax credit voucher scholarships’ are designed to attenuate the connection between government and private schools. Both vouchers and tax credit scholarships provide public money for parents to spend on private schools. But whereas regular voucher legislation simply appropriates public funds to pay for the scheme, tax credit scholarships are funded through deductions of taxation from private organisations known as ‘scholarship tuition organisations’, which administer the scholarships. Why bother taking such a tortuous route to pay for these schemes? Because it makes it easier for advocates to argue that the government is not unconstitutionally benefiting religious institutions.

Since private individuals freely choose the school, and private organisations administer the scheme, the fact that public money ultimately pays for religious tuition carries less weight in court. With help from advocacy organisations such as DeVos’s group and its affiliates, state legislators have increasingly utilized these submerged, attenuated mechanisms for policy delivery in order to insulate such programs from future legal challenge. Their efforts work. Tax credit voucher programs are significantly less likely to be struck down than regular vouchers, or even to be challenged in the first place. With DeVos’s expertise at his side, and a range of funding options to reduce the likelihood of legal challenges, constitutional No-Aid Provisions are unlikely to put the brakes on President Trump’s school choice agenda.

The cost of the proposed voucher program, running into several hundred billion dollars with the bulk to be raised by state governments, could prove a stumbling block given fraught and divisive federal-state dynamics in recent years. Trump must overcome deep suspicion of federal overreach in education, especially from his own party, though he can also rely on deep Republican strength at state level. Obvious opponents, such as teacher unions, are reeling from an election season in which they spent big – up and down-ballot – yet received little payoff. Absent a local- or state-led revolt (a real possibility), or successful constitutional challenge (unlikely, given the weakness of No-Aid Provisions), supporters of President Trump and his new Education Secretary’s agenda have cause for optimism.

Ursula Hackett – Royal Holloway, University of London
Ursula Hackett is Lecturer in Politics at Royal Holloway, University of London, and a British Academy Postdoctoral Fellow. She joined Royal Holloway in 2016 as Lecturer in Politics, a post she currently holds in conjunction with a British Academy Postdoctoral Research Fellowship on the politics of vouchers – programmes that transform the state by delegating responsibility for core policy functions to private actors. A former PPE-ist, she was previously based at the University of Oxford as Junior Research Fellow in US Politics.  Her research focuses on American Political Development, federalism, public policymaking, education and religion.