Donald Trump’s election was met with immediate protests from those who did not wish to see him take up residence in the White House, and such protests may well become a frequent occurrence during Trump’s presidency. But how will the Trump administration respond to these likely protests and dissent? Using data on protests and repression in US cities over the past four decades, Emily Hencken Ritter finds that greater dissent leads to repressive responses from authorities. She also warns that, judging by Donald Trump’s rhetoric, we may also see an increase in preventive repression such as registries, unwarranted deportations, and restrictions on civil liberties, but well-resourced activist organizations will be a solid defense against these policies.

Donald Trump’s transition into the presidency has created an environment of escalating fear in the United States. Fear that civil liberty advancements will be revoked, policies will discriminate against ethnic groups, and ordinary citizens will perceive they have society’s permission to express hate and physical cruelty. The days since the election have left huge swaths of the population with strong desires to do something. Anything. Everything.

Yet we don’t know what the response will be if we take action. Minority groups in particular may fear that actively protesting or otherwise dissenting may lead authorities to repress them in response. And if the new administration sets or allows policies that systematically discriminate against and target minority groups, it could be much harder to dissent at all.

In recent research, Courtenay Conrad and I examine the complex relationship between popular dissent activities, preventive policies, and repressive responses. Our findings, and some of my previous research, shed light on what we might expect in the coming year, and what may be the best strategies for dissenting against racist, sexist, and otherwise discriminatory policies. In short, there may be greater repression of dissent under a Trump administration, and only the strongest and best resourced organizations may be able to withstand it.

Why do authorities repress?

Most people tend to agree as to why authorities repress people—those in power want to control dissent. Protesters in democracies and autocracies alike expect some possibility of being blacklisted, arrested, beaten, or even killed. The belief that dissent leads to a repressive response is so pervasive among scholars, reporters, activists, and even dissidents that it has been labeled the Law of Coercive Responsiveness.

But is that how it works? While it certainly seems to be the case anecdotally, few scholars have found actual evidence that dissent causes repression. Millions of individuals and groups engage in some sort of public dissent each year in every country undeterred by the threat of repressive responses, and many of these acts of dissent are not met with repression.

Given these patterns of behavior, the belief that dissent causes repression becomes far less certain. How can people who are considering protest know what to expect? When will states respond to dissent with repression?

Survival of the fittest

Authorities ultimately want to identify threat—groups that can credibly promise to impose costs on the government that could force it to change its policies. Why waste resources and political capital to repress groups that are no threat to your policies or power?

Unfortunately for leaders, it is very difficult to know which actions or groups are dangerous to their power and which ones are not. The threat of repression goes a long way to help leaders solve this puzzle.

If individuals considering public dissent expect that an action will lead to physical or structural repression, they are less likely to do it in the first place. The dissident opts out, such that the promise of repression effectively reduces dissent activities, but we never actually observe repression. Johan Galtung famously coined this steady state “negative peace:” the absence of violence caused by the threat of violence. Dissent supposedly would have led to repression, but censoring prevents onlookers from seeing it.

With weaker groups staying home, governments have a clearer picture of which groups are likely to be threatening. Individuals with stronger desires to change policies and groups with more resources will be willing to incur some risk to get what they want. When groups dissent under the threat of repression, they signal to the leader that they have threatening qualities. These are the groups that authorities want to respond to with repression.

A strategic censoring process, in which dissidents stay home and leaders identify threats, is consistent with the assumption that dissent leads to repression. However, this forgets preventive repression. 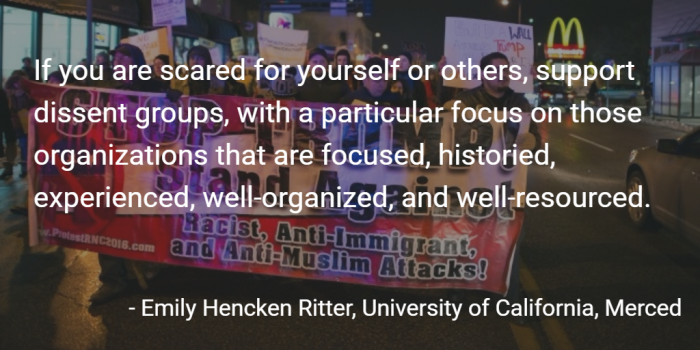 Preventive repression is another way that government agents sort groups into their threat types. These are activities that authorities undertake to undermine dissent before it happens, either by attacking or restricting groups’ capacity to mobilize people (like with curfews or surveillance), or using physical repression to limit their willingness to dissent. When a country uses these kinds of policies and practices, dissidents again self-sort. Most dissidents cannot overcome these preventive obstructions and will stay home rather than accepting major risks. But groups that are well-resourced, organized, experienced, and have strong convictions about the value of their cause, will dissent despite the difficulties caused by the government’s preventive efforts.  Governments can also “buy off” dissent, granting accommodations so that groups prefer to accept the bargain rather than fighting. This similarly leads to sorting, such that the most convicted or well-resourced groups are less likely to accept such a bargain and will dissent instead.

Put simply, only the strongest survive preventive repression. When authorities see protests, knowing that they occurred despite actions to prevent them, they learn that these groups are strong or motivated enough to represent a meaningful threat to the people in power.

But authorities also learn that they survived at least one round of repression! What then is a government to do? Should they increase repression in an attempt to control power, or accommodate demands (since repression has failed) to deter the group?

When dissent activities occur under preventive repression, government responses are random and unsystematic.

If the government does not use preventive repression (or does so rarely, selectively, subtly, etc.), then many kinds of groups will dissent. They are resourced and willing to opt in, but there has been no test, no hurdle to cross. Faced with untested dissent, authorities are far more likely to respond with repression, as the assumption the Law of Coercive repression would imply.

Bringing data to the question

In our article (ungated version), Courtenay and I argue that these complex processes of strategic censoring and uncertainty about threat create difficult problems for people who want to use data to understand the conflict relationship. We ran a series of statistical models that use rainfall to identify “randomly” distributed dissent, enabling us to see if dissent that is not connected to repression in the first place will evoke a repressive response.

Though the US is plenty familiar with tactics of repression, our laws and democratic values mostly manage to keep preventive repression at much lower levels than other, less democratic countries (though there seems to be no difference in repression by regime type when the dissent is violent). According to the logic of self-censoring, we would expect democracies like the US to have a systematic response of repression whenever they experience dissent. Examining protest events in 620 US cities every day over 35 years, we find that increases in dissent events do lead to a systematic increase in repression by US authorities.

We also looked at daily dissent events in 1159 provinces across 54 African countries from 1990 to 2012. We found that in democratic countries, where we anticipate that preventive repression policies will be more constrained, there is indeed a systematic, statistical relationship between increases in dissent and increases in repressive responses, just like in the US cities.

However, in non-democratic African countries (80 percent of the 54), we found no evidence that governments systematically respond to dissent with repression. These countries have far more leeway to use preventive repression (and in fact violate civil and empowerment rights more often than democracies). That implies that the dissent that does manifest itself in these countries is particularly strong, dangerous, and can withstand repression. Governments have no consistent response to challenges of this type.

Lessons in the light of new fears

Many people in the US are afraid for the future under a Trump presidency and unified Republican Congress. There has been a notable shift in reported harassment and racism since Election Day, and a great deal of speculation about potential repressive policies regarding immigrants, Muslims, women, persons of color, LGBTQ+ persons, and more. There has been an incredible surge in support for organizations that take action against repression.

It is difficult to predict what will occur in policies and practice over the next four years. Even if there is no change in repressive policies in the US, dissent is nevertheless likely to be met with some sort of repressive response, at least from agents without leashes.

What could shift, though, is an increase in preventive repression, if the rhetoric of the campaign and speculation regarding appointments is a sign of what is to come. That kind of repression – such as registries, unwarranted deportations, restrictions on civil liberties, and an overall environment of intimidation – is the kind that only the strongest, most dedicated, most well-resourced dissidents will be able to withstand.

But if they can withstand it, they can be successful in changing the status quo.

If you are scared for yourself or others, support dissent groups, with a particular focus on those organizations that are focused, historied, experienced, well-organized, and well-resourced. If authorities impose or allow preventive repression, these will be the groups that will survive governmental attack. They will be our best hope for protection.

This article is based on the paper, ‘Preventing and Responding to Dissent: The Observational Challenges of Explaining Strategic Repression’, in the American Political Science Review.

Emily Hencken Ritter – University of California, Merced
Emily Hencken Ritter is an assistant professor of political science at the University of California, Merced. Her research centers on the effects of international and comparative legal institutions on the strategic relationship between state repression and popular dissent activity. She has published articles in the American Political Science Review, the Journal of Politics, the Journal of Peace Research, the Journal of Conflict Resolution, and other major political science journals. Her book manuscript exploring the effects of international human rights treaties on repression and dissent, co-authored with Courtenay Conrad, is currently under review.