Members of Congress spend a great deal of their time fundraising. But what incentivizes those with money to give it to Congressional politicians? In new research which surveyed more than 2,800 in and out of state donors, Michael Barber, Sharece Thrower, and Brandice Canes-Wrone find that donors are more likely to give to senators when their votes align with their policy preferences, as well as to legislators who serve on committees that are important to their profession. Additionally, donors from the same state as senators give around $350 more on average than those from elsewhere.

Generations of political science students have learned that “Congress in its committee-room is Congress at work”. Yet today fundraising is arguably what Congress works at most. Consider the model daily schedule presented by the Democratic Congressional Campaign Committee. Four hours are devoted to phoning potential contributors, an hour to outreach such as meet-and-greets, two hours to constituent meetings, and only two hours to committee or floor work. This development raises critical questions. What are the incentives of the contributors on whom Congress spends much of its time? Are they primarily partisan boosters who give regardless of incumbents’ records? Or are they instead sophisticated consumers, who base contributions on a candidate’s policy positions and areas of influence?

To answer these questions, we surveyed over 2800 in- and out-of-state donors to the 2012 Senate elections about several issues, including their preferences on a range of policy issues. We then combined these responses with Federal Election Committee data on contributors’ professions and donating behavior, along with congressional data on Senators’ roll call votes, committee assignments, and campaign behavior by challengers.

We designed the survey to include substantial samples of both in- and out-of-state donors, as well as in-state, in-party residents who gave to a federal candidate but not their incumbent senator. Existing surveys generally sample only donors to a particular type of candidate or a population dominated by non-donors.  By contrast, this survey includes people who are within-district donors but did not give to the candidates under examination, thereby encompassing a group that a candidate would naturally target for financial support. Moreover, by including a major sample of out-of-state donors, we can examine a population that often comprises a majority of a candidate’s individual contributions.

First, donors are more likely to give to a senator when the senator’s roll call votes match a donor’s policy preferences. The effect is quite large – a change of 3 roll call votes leads to an increased probability of donating to a senator of approximately 50 percent. Multiplied by the thousands of donors who contribute thousands or dollars, this can translate into an increase of hundreds of thousands of potential campaign donations. This is true whether or not the donor and incumbent are in the same party or reside in the same state.  In other words, donors are quite discerning when it comes to the incumbent’s policy record and how it relates to their own policy preferences. This challenges the presumption that people simply donate to their preferred party without paying much attention to the policy preferences of the individual candidate they are supporting.

Second, donors are more likely to contribute to members who serve on committees that handle matters relevant to their profession. We measure this by linking the professions of each of the thousands of donors we surveyed and the relevant committees in the Senate that relate to those professions. Again, the probability of making a donation to a senator is approximately 50 percent higher when a donor’s profession is aligned with a Senator’s committee assignment. Yet this decision does not appear to be motivated by expectations of special access to the members or specific legislative favors.  Instead, the donors give to members who represent their preferences on matters relevant to the profession or industry.

Finally, once someone decides to give, the dollar value of that donation is less determined by the legislator’s voting record and much more by things particular to the donor. As one would expect, increases in a donor’s income are associated with larger contributions.  Beyond income, donors who live inside of a senator’s state are more likely to give more money than out-of-state donors, by roughly $350 additional dollars.  In other words, while legislators affect the number of donations through their roll call and committee behavior, their legislative track record does not seem to have much impact on the size of the contributions.

What does this all mean? These findings have potential implications for congressional members’ incentives. As former Representative Brad Miller (D-NC) has noted:

It really does affect how members of Congress behave if the most important thing they think about is fundraising…You won’t ask tough questions in hearings that might displease potential contributors, won’t support amendments that might anger them, will tend to vote the way contributors want you to vote

These concerns are heightened by work that suggests donors are wealthier than voters, even more ideologically extreme than partisan voters, and granted preferential access to legislators.  While there are certainly tradeoffs between catering to donors versus other concerns, given that individual donors’ importance to campaign fundraising has risen, it seems plausible that congressional members could be increasingly responsive to donors, both in- and out-of-state donors whose preferences do not align with those of in-state voters.

This article is based on the paper, ‘Ideologically Sophisticated Donors: Which Candidates Do Individual Contributors Finance?’, in the American Journal of Political Science.

Brandice Canes-Wrone – Princeton University
Brandice Canes-Wrone is the Donald E. Stokes Professor of Public and International Affairs and a Professor of Politics at Princeton University. Her current research focuses on the economic effects of electoral institutions, how the selection procedures for judges affect their decisions on the court, the impact of presidential campaigning on congressional elections, and presidential policy making.

Posted In: Brandice Canes-Wrone | Elections and party politics across the US | Michael Barber | Sharece Thrower 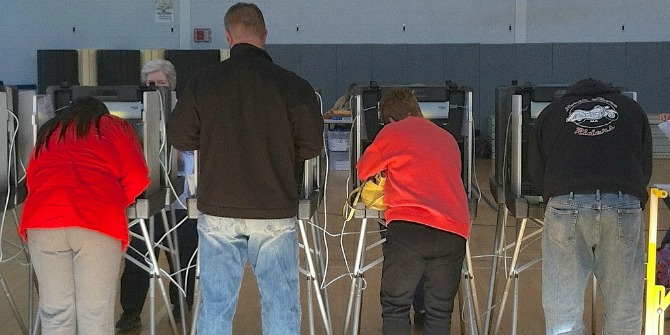