SWAT raids are more about symbolism than reducing crime in the long term.

SWAT raids are more about symbolism than reducing crime in the long term.

SWAT raids are among the most dramatic display of the power of law enforcement to deal with crime and disorder. But are SWAT raids actually effective at reducing crime? In new research which studies 39 SWAT raids in Buffalo, New York, Dae-Young Kim, Scott W. Phillips and Andrew P. Wheeler find that the raids did lead to fewer street crimes involving property – though only for a short time, and that they had no deterrent effect on violent crimes in private places, drug arrests, or calls for service.

After the events in Ferguson, MO, and San Bernardino, CA, there have been public debates on the value of Special Weapons and Tactics (SWAT).  Despite these well-publicized incidents, what is less known is the fact that SWAT raids have become a common crime reduction strategy. Aggressive and confrontational policing is often viewed by the police and public as the most expedient way of solving crime and disorder.

In new research, we examined whether symbolic SWAT raids have any instrumental effects on drug arrests, calls for service, and different types of crimes. The location of the study is Buffalo, NY. It is a mid-sized city with a population of approximately over 250,000 residents. As one of the rust belt cities, it has experienced the decline of its manufacturing sector, population loss, and urban decay. According to Uniform Crime Report (2012), both violent and property rates were much higher than the national average for violent and property crimes.

Under “Operation Street Sweeper” (OSS), the Buffalo Police Department executed SWAT raids on June 6 and 7, 2012. There were a total of 39 drug raids in the areas where violence and drug activities were prevalent (Buffalo News, 13 June, 2012). Figure 1 provides a map of all 39 raid areas. On its web site, the Buffalo Police Department indicates that this SWAT intervention was used to address crime and disorder. 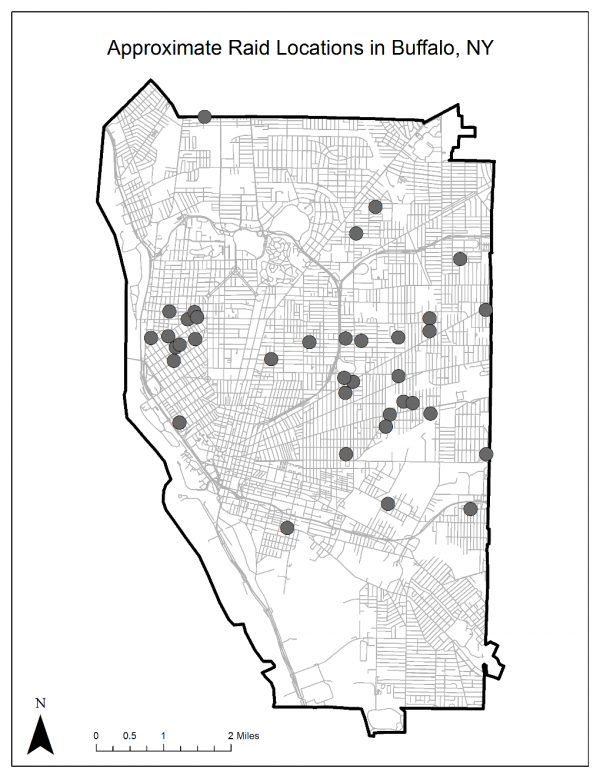 Although SWAT raids were executed at the 39 crime hot spots, it is expected that there are more widespread crime reduction effects beyond the targeted areas. Why? Using SWAT raids usually sparks intense media coverage and attracts public attention due to their ceremonial and symbolic nature. These highly publicized and visible raids used at high crime places can convey to potential offenders beyond the targeted areas an increasing threat of apprehension. It is thus likely that there will be citywide effects on reducing crime and disorder. An assessment of the instrumental value of SWAT raids was needed.

There are two key findings and corresponding implications for policy development. First, there is no evidence of a deterrent effect on drug arrests and calls for service. The degree to which SWAT raids affects crimes differed across different types of crimes. The impact of the intervention was greatest for street crimes involving property, such as robberies and larceny-thefts. Violent crimes often occurring in private places among acquaintances did not decline significantly in response to the highly publicized and visible SWAT intervention.

Given the geographical concentrations of crime and disorder, police agencies continuously assign more officers to crime-ridden areas and maintain their persistent presence and surveillance. Through the increased perceptions of arrest risk, potential offenders are hopefully deterred from committing street crimes. It is important to focus police resources on particular street crimes in hot spot areas, which make police more efficient at dealing with crime. This may lead to an overall decline in crimes citywide.

Our second finding shows that the deterrent effects of SWAT raids were short in duration due to the nature of these short-term interventions. This result confirms the findings of prior research that the deterrent effect of hot spot policing is temporary. To achieve relatively long-term crime reductions, it is imperative to develop more proactive policing strategies (e.g., problem-oriented policing, community policing, and intelligence-led policing) beyond strictly reactive law enforcement.

Finally, the discussions above do not preclude the possibility of improving the urban environment to deter crime in the long term. Crime is usually concentrated in socially disorganized neighborhoods where their physical and social environment has deteriorated.

Characteristics of socially disorganized neighborhoods include abandoned and dilapidated buildings, garbage and litter, vandalism, drug use and sales, gang activities, poverty, and population turnover. Given the quickly declining deterrent effect of the law enforcement strategy examined here, the relative importance of positive physical and social environment arises as an important issue to reduce crime and disorder in the long-term.

Our results partially support the deterrent effect of SWAT raids especially for property crimes. However, the generalizability is limited to other cities. The degree to which SWAT raids influence crime varies across cities since crime problems are inherently local in character. In the future, more research will be needed before we can be more confident with the current results and generalize them beyond Buffalo.

This article is based on the paper, ‘Using “Symbolic” SWAT Raids as a Crime Reduction Strategy’, in Criminal Justice Policy Review.

Scott W. Phillips – State University of New York (SUNY) Buffalo State
Scott W. Phillips is an associate professor in the Criminal Justice Department at SUNY Buffalo State. He earned a PhD from SUNY Albany and his research focuses on empirical examinations of police officer decision-making and organizational influences on officer’s behavior. He has worked as the Futurist Scholar in Residence with the Behavioral Science Unit at the Federal Bureau of Investigation’s National Academy in Quantico, Virginia.