Blacks, Hispanics and Whites all have differing homicide rates. But how have these rates changed in recent years? In new research which examines 131 metropolitan areas, Michael T. Light takes the first look at trends in racial and ethnic homicide gaps in the US since 1990, finding that these gaps had decreased by between 35 and 50 percent. He writes that these declining trends may be explained by a growing immigrant population, and more importantly, by a rising incarceration rate which has disproportionately affected racial and ethnic minorities.

Despite substantial contemporary public and media attention to issues of race, crime, and justice in the US, we know surprisingly little about the trends in violent crime for different racial/ethnic groups in recent decades. For example, what are the disparities in homicide between whites, African Americans, and Hispanics? Have these disparities changed over the past 20 years? If so, why? These gaps in our knowledge largely stem simply from data limitations, as ethnic identifiers are rarely collected in many official crime statistics. Given that Hispanics now represent the largest minority group in the US, this has been a major blind spot for criminologists.

However, in new research, Jeffery Ulmer and I constructed the first longitudinal data set that includes race/ethnicity-specific measures for homicides from 1990 to 2010. We did so by combining death records from the Centers for Disease Control – which collects information on both race and ethnicity for homicide victims – with multiple data sources to measure the socioeconomic, demographic and legal context of 131 of the largest US metropolitan areas. With this unique data set, we provide the first look into even the basic information on the trends in racial and ethnic gaps in homicide for the US over the past two decades.

As shown in Figure 1, which illustrates the homicide gaps between whites, African Americans, and Hispanics (e.g. the black homicide rate minus the white homicide rate; the Hispanic rate minus the white rate, etc.), a lot changed over this period. Across all three comparisons – white-black, white-Hispanic, and black-Hispanic – we found that racial/ethnic disparities in homicide have decreased substantially: the black-white homicide gap decreased by 40 percent, the Hispanic-white gap by 55 percent, and the black-Hispanic by 35 percent. And it’s important to note that the homicide rate declined for each racial/ethnic group over this period. This means that the closing of the gaps is due to the homicide rate dropping more precipitously for the two minority groups. Because criminologists have long viewed group disparities in criminal violence as important indicators of broader patterns of racial/ethnic inequality, these are promising trends. 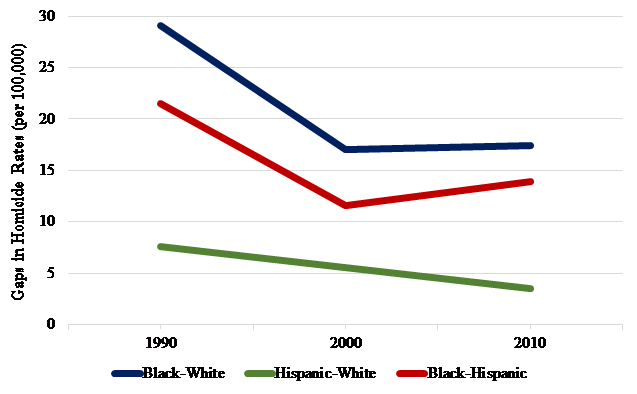 Source: Adapted from Light and Ulmer, 2016

What explains these trends?

The next step in our study was to try and understand why the racial/ethnic homicide gaps declined over this period. One of the major contributing factors was declines in structural disadvantage – which includes elements such as poverty and unemployment. For example, the black-white gap in poverty (the black poverty rate minus the white poverty rate) decreased from 21.3 percent in 1990 to 17.3 percent in 2010. These findings are not very surprising, as structural disadvantage has consistently been shown to explain much of the crime differences between racial/ethnic groups in the US.

Of greater interest for our study were three of the most significant social trends over the past two decades: wealth inequality, immigration, and incarceration. While each of these trends had been widely discussed by scholars interested in racial/ethnic inequality generally, until now, they had largely escaped contemporary inquiry in our understanding of the changes in racial/ethnic violence.

Does wealth inequality between racial/ethnic groups help explain the gaps in homicide between groups? There are theoretical reasons to think that it might. In 2009, the median wealth of white households was 20 times that of black households and 18 times that of Hispanic households—the largest wealth gaps seen in 25 years. According to strain theory, racial economic inequalities can create both despair and conflict, leading to increased violent crime. However, our study provided no evidence linking wealth inequality to homicide differences between racial/ethnic groups. In fact, the results were actually somewhat counter to the theory:  the black-white homicide gap is smaller in areas where affluence inequality is greatest. One potential explanation for this is that both blacks and whites are better off in high wealth inequality areas. For example, the percentage of affluent black households (an index measure combining high incomes with high educational attainment) in metro-areas above the mean of the white-black affluence gap is 12.9. In areas at or below the mean, the percentage is 10.8. For whites, 36.8 percent of earners are affluent in high wealth inequality areas, compared to just 26.4 percent in low wealth inequality areas.

What about immigration? Between 1990 and 2010, the foreign-born population in the US more than doubled, from 19.8 million to 40 million, primarily due to immigration from Latin America. Did these trends play a role in the homicide gaps between groups? Yes and no. We found that larger and increasing immigrant population differences were associated with declining black-white homicide gaps, but largely unassociated with Hispanic-white or black-Hispanic homicide differences. Though we couldn’t identify the mechanisms, these findings are consistent with a growing body of work suggesting that immigration often decreases criminal violence, but may have somewhat different affects for certain racial/ethnic groups.

Our last focus was on incarceration. Between 1970 and 2010, the incarceration rate in the US increased over five-fold, from 96 (per 100,000) to 500 (per 100,000). Of this prison population growth, nearly 60 percent took place after 1990, and this unprecedented expansion of incarceration has been vastly unequal across racial/ethnic groups. In 2008, less than 1 percent of white men were incarcerated, compared to 2.7 percent of Hispanic men and nearly 7 percent of black men.

Though we find that incarceration has reduced the race gap in homicide over the past two decades, we caution against drawing the conclusion that more imprisonment would produce more benefits because the findings need to be considered in the broader context of the effects of mass incarceration. Given the mounting evidence of the collateral consequences of the prison boom for exacerbating racial inequality in labor market participation, health, single parent families, childhood well-being, and other outcomes, it is highly unlikely the reductions in homicide victimization rates have outweighed the devastating impact of mass incarceration on minority communities, especially the black community.

Our findings suggest that policies should focus on improving community conditions in minority areas through various means such as economic investment and housing equality, as well as spending on education, drug treatment, and work training programs. Indeed, we found that two of the strongest predictors of the gaps in homicide victimization rates between whites and blacks, and Hispanics and blacks were measures of structural disadvantage and racial segregation. Thus, unlike mass incarceration, focusing on community investment would go a long way towards reducing racial/ethnic differences in criminal violence without worsening racial/ethnic inequality in other areas.

This article is based on the paper, ‘Explaining the Gaps in White, Black, and Hispanic Violence since 1990’ in the American Sociological Review.