Despite the civil rights movement of the 1960s and affirmative action policies, major pay gaps between whites and blacks persist. While the racial pay gap closed during the latter half of the 20th century, this trend reversed around 2000, and the gap has been growing ever since. In new research, Hadas Mandel and Moshe Semyonov examine a number of potential explanations for this reversal. They argue that the rising income inequality, along with continued occupational segregation and market discrimination, contributed to the enlargement of pay gaps between blacks and whites.

Following the implementation of the 1964 Civil Rights Act and the enactment of affirmative action policies in the United States, both the educational level and the relative income of black men and women rose steadily. Consequently, earnings disparities between blacks and whites declined; this trend continued until the end of the 20th Century, for both genders. But from the turn of the new millennium, however, the trend reversed for the first time since 1970, for both men and women. Given the continual convergence in pay between blacks and whites and the gender differences in the size and in the sources of the pay gaps, the reversal of the trend among both gender groups is most intriguing.

Our analysis – based on the IPUMS Census and ACS data – covers the period following the Civil Right Act (1970), and stretches into the new millennium, beyond the 2008 economic crisis and up until 2013. Our findings give firm support to several expectations, while leaving others open to debate. First, as shown in Figure 1 below, our expectation of much smaller racial gaps between women than between men was firmly supported. In addition, the unexplained portion of the pay gap – the indicator we used as a proxy for racial discrimination – was also found to be much smaller among women than among men. In fact, from 1980 until 2000, there were virtually no racial pay gaps among women – a finding which contradicts the ‘double disadvantage’ hypothesis (i.e. being a member of both disadvantaged gender and racial minority groups), and supports the argument that black men are the prime target of economic discrimination. This is so because black men (but not black women) pose a threat to whites; a threat that results in negative stereotypes of black men, especially young black men, as violent, criminal, hostile, unreliable, and lazy.

Figure 1 also shows that earnings inequality in the US is more gendered than racialized; women of both races share a considerable earnings disadvantage, relative to men. This finding is in line with the argument that women of different races have much more in common than men do; an argument based on the universal tension between family obligations and paid work that black and white women share. Thus, the “racial advantage” of black women (compared to black men) should be understood, first and foremost, within the context of their “gender disadvantage.”

Despite the differences between men and women, the findings underscore a striking similarity across the two gender groups in the over-time trend of the racial earnings gap. Moreover, the over-time trend in the racial earnings gap is closely related to over-time changes in government reforms. Figure 2 displays a disaggregation of the racial gaps into explained and unexplained components from 1970, and also the trend during the first decade of the new millennium. The figure underscores not only the reversal of the trend of declining racial disparities during the new millennium, but also the significant enlargement of the unexplained portion of the gap, our proxy for racial discrimination.

Intrigued by these findings, we examined the trend and offer several alternative explanations for its reversal. First, we examined whether this reversal was a post-recession effect, but found no evidence to support this. The “Great Recession” officially began at the end of 2007, ending in June 2009. Although its consequences may have begun earlier and may still persist until today, we found no evidence for a dramatic change in the years before and after the recession, but rather of a continuing trend of widening pay gaps over the years, one that finally peaked in 2013 for both gender groups. Second, we examined the possible effect of the rise in income inequality in the US, inequality that has particularly increased in the new millennium. The logic embodied in this argument contends that because blacks are overrepresented at the bottom and whites overrepresented at the top of the wage hierarchy, a rise in income inequality (i.e. enlargement of the distance between top and bottom wages) would also result in an increase in the gap between blacks and whites. This rising income inequality thesis is supported in the case of men, but not women, suggesting that income inequality is more detrimental to the earnings of black men than to other subgroups.

We then examined whether educational differences contributed to the enlargement of the pay gaps between black and whites. We found no support for this expectation with both genders. However, we did find that the increasing economic rewards for working hours contributed to the enlargement of the gaps between black and white men, because the latter group tended to work fewer hours than the former group. The process of occupational segregation – one of the major sources of pay differentials – might also have contributed to widening the gap. This is so because the role of occupations in explaining the gap has widened since the beginning of the new millennium, for both gender groups. Likewise, the continual racial occupational integration that characterized the period after the 1970 reforms has come to a halt in the recent decade. Finally, we entertained the possibility that an increase in market discrimination took place, as shown by the increase in the unexplained portion of the racial pay-gap for both men and women. Although an increase in the unexplained portion of the racial gaps, and stagnation in occupational desegregation, are only implicit indicators of discrimination, simultaneous changes to both alongside changes in government reforms over the course of time may be an indication of growing discrimination in the American labor market.

We are not the only ones to link pay discrimination, and stagnation in the processes of desegregation, to government reforms. Stainback and Tomaskovic-Devey showed that between 1980 and 2005 – when the regulatory environment switched to advancing diversity programs rather than affirmative action policy – the pace of improvement in blacks’ access to good jobs, and the decrease in racial occupational segregation, largely declined. Such a switch was also described by Cancio and colleagues, who attributed the rise in economic discrimination against blacks after 1980 to the retreat from the enforcement of antidiscrimination policies during the Reagan and Bush Sr. presidential administrations. Wilson, Roscigno, and Huffman have shown that after the privatization of employment practices in the public sector, racial pay gaps widened substantially. The findings presented by our research lend support for this argument, but only indirectly, by revealing once again the affinity between government reforms and fluctuations in racial gaps, following the Civil Rights Act and in the new millennium. At this time, we have no direct way of examining whether the reversal of the trend indicates a one-time deviation from the general trend of declining racial earnings disparities, or a real and consistent change. It is our hope that future research will provide further direct tests of the explanations entertained in this article, and will provide answers to the questions that remain.

This article is based on the paper, ‘Going Back in Time? Gender Differences in Trends and Sources of the Racial Pay Gap, 1970 to 2010’ in the American Sociological Review.

Note:  This article gives the views of the author, and not the position of USAPP– American Politics and Policy, nor of the London School of Economics

Hadas Mandel – Tel Aviv University
Hadas Mandel is a professor in the Department of Sociology and Anthropology at Tel Aviv University. Her research focuses on the intersection between gender, class, and social policies; it addresses the complex and seemingly paradoxical economic implications of welfare state policies on women. Her recent work explores long-term trends in gender and race inequality in the U.S. labor market. These works emphasize the changing role of gender in creating wage inequality between occupations, the intersection between gender and race, and the relationship between structural and individual aspects of gender inequality, all from a comparative longitudinal perspective. 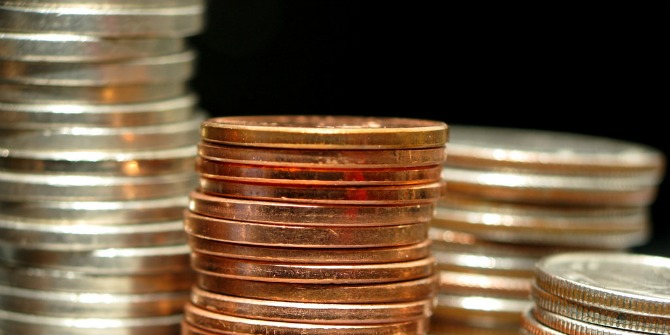