After the Great Recession, many low and middle-income households are struggling to pay the rent.

After the Great Recession, many low and middle-income households are struggling to pay the rent.

Despite growth in the US economy after the Great Recession, more than half of households that rent pay more than 30 percent of their income towards their accommodation. In new research, Gregg Colburn and Ryan Allen find that major differences in rent burden between households are likely due to income, geography, and household size. With more households renting, they argue that policymakers must do more to address housing affordability in the US.

In the aftermath of the Great recession, the percentage of households facing high rent burdens in the US reached historically high levels.  A household is rent burdened when the percentage of income used to pay the rent exceeds 30 percent.  According to many studies, the percentage of rent burdened households in the US now exceeds 50 percent.  The prevalence of such high rent burdens is a major public policy problem because large rent expenditures have the potential to crowd out other essential spending on food, clothing, and healthcare.  Inadequate spending on basic needs is associated with a wide range of health and social problems for adults and children.

Many factors have converged to produce the historically high levels of rent burden.  First, households have shifted to the rental market in response to the recent foreclosure crisis and tighter mortgage lending standards in the US. Second, during the recession, the construction of multi-family housing units failed to keep pace with the increased demand for rental housing.  Last, household incomes among low and middle income earners have stagnated.  The result of these dynamics is higher rents, lower vacancy rates, and increased rates of rent burden.

Our initial analysis found that households with the following traits experience higher rates of rent burden: lower incomes, presence of children, headed by women, non-white, and foreign born. In addition, households in metropolitan areas and in the northeast and west regions of the US are more likely to experience rent burden. However, when we used regression models to enhance our understanding, our results indicated that race and place of birth don’t actually predict people’s rent burdens.

Instead, the disparities in rent burdens between different racial groups and those born in the US and elsewhere are likely the product of other factors, such as income disparities. In fact, our models suggest that income, household size, and the presence of children are associated with a statistically significant increase in the probability of a household facing rent burden.  Geography also plays an important role as households in metropolitan areas were more likely to face rent burden as are households in the northeastern and western regions of the country.

Figure 1 shows the predicted probabilities for exiting rent burden in 2010 for households that either (i) increase or (ii) hold constant the number of adults in the household.  The graphic demonstrates that the likelihood of exiting rent burden was much greater for those households that increased household size.  These findings suggest that the rental market dynamics in the wake of the Great Recession have created challenging conditions for low-income and middle-income households in the US. 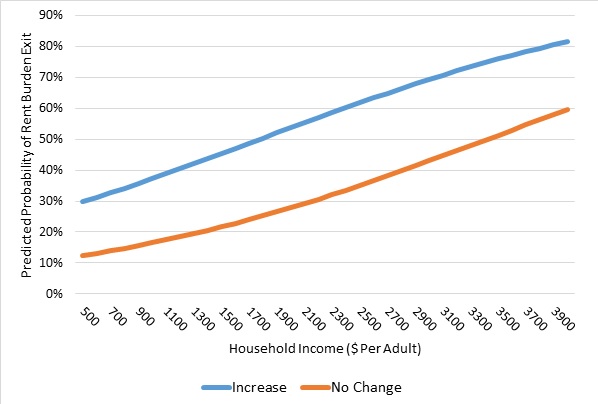 Note: Predicted probabilities are based on results from the model of rent burden exit for 2010 in Table 5. The predicted probabilities assume a range of household incomes for a native-born black, married, male-headed, non-doubled-up renter household with at least one child living in a metropolitan area of the West region of the US. Source: Survey of Income and Program Participation

The current challenges facing renter households have become a public policy problem that has received the attention of all levels of government, and our findings are relevant for advocates and policymakers concerned about housing affordability in the US. Potential solutions to address this problem include reducing restrictions on residential density in exchange for the inclusion of affordable, subsidized housing.  Such a policy would increase the supply of housing and reduce the cost to build housing, while producing housing that is specifically affordable to lower income households.  Alternatively, policymakers could take steps to increase the disposable income of renter households by allowing renter households to deduct rental payments from their taxes.  Another technique would be to expand the Earned Income Tax Credit program that would provide additional income that households could use to defray housing costs.

This article is based on the paper, ‘Rent burden and the Great Recession in the USA’ in Urban Studies.

Ryan Allen – University of Minnesota
Ryan Allen is an associate professor of community and economic development at the University of Minnesota. His research focuses on the community and economic development processes of immigrants in the United States.  Recently, he has focused on how households have responded to the foreclosure crisis as well as how the foreclosure crisis has affected neighborhood quality in the U.S.  He is also interested in immigrant home ownership and entrepreneurship.