In a recent article, Professor Inderjeet Parmar argued that not only was 2016 a great year for US politics, but that 2017 will be “even better”. Professor Randolph B. Persaud takes issue with these claims, arguing that with Trump’s election liberal identity politics is being replaced by a new patriotism based on a resurgent sense of Whiteness set against countries such as China and Mexico, and ‘other’ groups like Muslims. In addition, far from hurting the billionaire class and capitalist elites, Trump’s victory has instead put them in the driver’s seat.

I have followed Professor Inderjeet Parmar’s frequent commentaries on the US 2016 elections with great interest, not least because his analysis is always balanced and insightful. Last week, Professor Parmar published the article “2016 Was a Great Year For US Politics, 2017 Will Be Even Better” in The Wire.

In general, I do not agree with the claims of the article, not least because it omits many astute arguments he made during the course of the US election campaign. For instance, in a tremendously insightful article immediately after Super-Tuesday, Professor Parmar observed, and in my view correctly so, that

Many worry about the damage Trump’s populist-paranoid style is doing to America’s standing, as his illiberal, Islamophobic and racist ‘anti-politics’ galvanises crowds and provokes violent protests across the country

As early as March 2016, therefore, Parmar had arrived at the conclusion that Donald J. Trump posed a serious threat to the established order of things in the United States, if not beyond.

On July 25, 2016, Professor Parmar published a perceptive analysis of the historical legacies of the likes of Joe McCarthy, Barry Goldwater, and George Wallace, in which he went further on the racialization thesis than his previous position.  He argued that: “Trump employs a mixture of McCarthyite smears, Goldwater’s straight-talk, and pro-segregationist George Wallace-style xenophobia”. In that same article, and amidst declining prospects for Trump, Professor Parmar asked if “Despite likely defeat in November, could Trump’s xenophobic rhetoric, male chauvinism and appeal to sections of a disenfranchised white working class provide a model for a future Republican ascendancy?” Professor Parmar’s latest article appears to be a dramatic turn from the previous analyses, one that begs for clarification.

His previous analyses, most of which addressed concerns about Trump’s nativism, xenophobia, and outright racism disappeared from the New Year’s article. These have been replaced by a ‘feel-good global cosmopolitanism’, caught as it were in the peculiar American tradition of presenting ‘both sides’. Is that the case here? The racism which underwrote Trump’s campaign and which Professor Parmar had documented quite well virtually disappeared in his latest analysis.

Incidentally, this is exactly what the mostly white liberal media in the US has done, starting on the very night of the election.  Removed from the explanation of the Trump victory are the blatant racism, nativism, virulent ‘anti-immigrancy’, and sustained misogyny. The talk of the town now is that the loss is primarily due the over-commitment to the urban coalition and identity-based constituencies which were the mainstay of the Democrats. Trump voters are now being portrayed as the victims, the ‘hard-working Americans’ who were left behind by the Democrats and by neo-liberal globalization.  We need to know ‘who’ took away America’s greatness, and who will Make America Great Again? The stress here on the whiteness of the media is important because of the extent to which Donald Trump’s campaign relied on racism and anti-immigrant hysteria. The cable news outlets gave no space to visible minority-immigrants.

In my own view, the so-called liberal ‘identity based political correctness’ is now being replaced by a new racio-civilizational patriotism at the internal level, combined with a geo-civilizational national security doctrine. Could it be we are seeing a ‘White Wall’ against China, Mexico, and ‘all of those who don’t love America’? Does this explain the puzzle that Russia has become? Is Donald J. Trump the new Theodore Roosevelt? Professor Parmar may consider these possibilities before concluding with any finality that Trump is likely to pull back from unnecessary foreign entanglements.

There are a number of specific arguments in Professor Parmar’s optimistic article that I think deserve further consideration. Here are those arguments and my own elementary responses.

Wall Street lost the presidential election. Conservative ideology lost out to massive demands for bigger government for the people and heavier taxation of the corporate class and the very rich. The American establishment, its billionaire class, was, and is, on the ropes…

In my view, it is rather doubtful that the US ‘billionaire class’ is in any trouble. In fact, it may be quite the opposite. Wall Street does not need a surrogate as in Hillary Clinton because they now have the economic ruling class directly in command of state power.  Trump has promised to cut taxes for the wealthy and ease the repatriation of trillions of dollars that are currently held in overseas accounts. Trump’s rants against free trade were not merely anti-trade. What he wants is a more primitive form of hegemony, one that relies on the application of coercion in negotiations. As I have argued, primitive hegemony is different from enlightened hegemony, which is based on a combination of traditional balance of power politics combined with an American led liberal-multilateral world economic order. For Trump, better ‘deals’ in international trade can be had ‘for the American people’ through coercive diplomacy. Incidentally, as far back as 1969 the noted state theorist Ralph Miliband had determined that:

“the notion of businessmen as remote from political affairs, in a direct and personal way, greatly exaggerates their reluctance to seek political power; and equally underestimates how often the search has been successful” (p. 56; emphasis added).

A second reason for Americans to be optimistic according to Professor Parmar is:

Millions voted for candidates who demanded the US step back from its global policeman role and reduce its military footprint. Its post-1945 global military and other alliances were challenged and questioned and its Middle Eastern wars denounced especially the illegal invasion and occupation of Iraq

The optimism is only partially tenable here. We need to recall that there was in fact determined opposition to the Iraq war before it started. There were protests across the country and major figures even from within the Republican Party, such as Brent Scowcroft and George H.W. Bush insisted that the war would be a mistake.  The Pottery Barn Rule (“You break it, you own it”) was coined in this context. If the 2016 election outcome is a partial measure of the views of Americans on foreign policy and national security, then millions of Americans also voted to take the attack to the Muslim world both at home and abroad, registry and all. Trump’s attacks on Mexico and China were central to his victory. The rhetorical form of the attacks against these two countries were constructed as civilizational, if not racial enemies of Americans. He shifted his foreign aggression from traditional ‘balance of power’ jargon to ‘balance of civilization’ discourse.

Protests over the election of Trump criss-crossed the nation and funds began flowing in their millions to campaigns against intolerance, hate crimes and xenophobia. The politics of progressivism has taken a huge leap forward

Protests against Trump did indeed produce a liberal rally, but how is that a victory? Protests are part of the ‘standard-operating-procedure’ of left liberalism, even if for good reasons. Yet, it is less than two months since the elections, and the protests have disappeared. In distinct contrast to robust leadership from the left, no other than Al Gore took the elevator up the Trump Tower only to be insulted soon thereafter by the appointment of a climate change denier. Trump’s victory seems to have been transformed into a propellant for an amalgam of indiscretions, harassment, and even outright violence. The Southern Poverty Law Center has reported that race-based and anti-immigrant related harassment has increased dramatically (Figure 1).  We should not forget that hundreds of neo-Nazis met a few hundred yards from the White House (at the Reagan Building) to celebrate Trump’s victory.

Figure 1 – Types of harassment and intimidation since Election Day 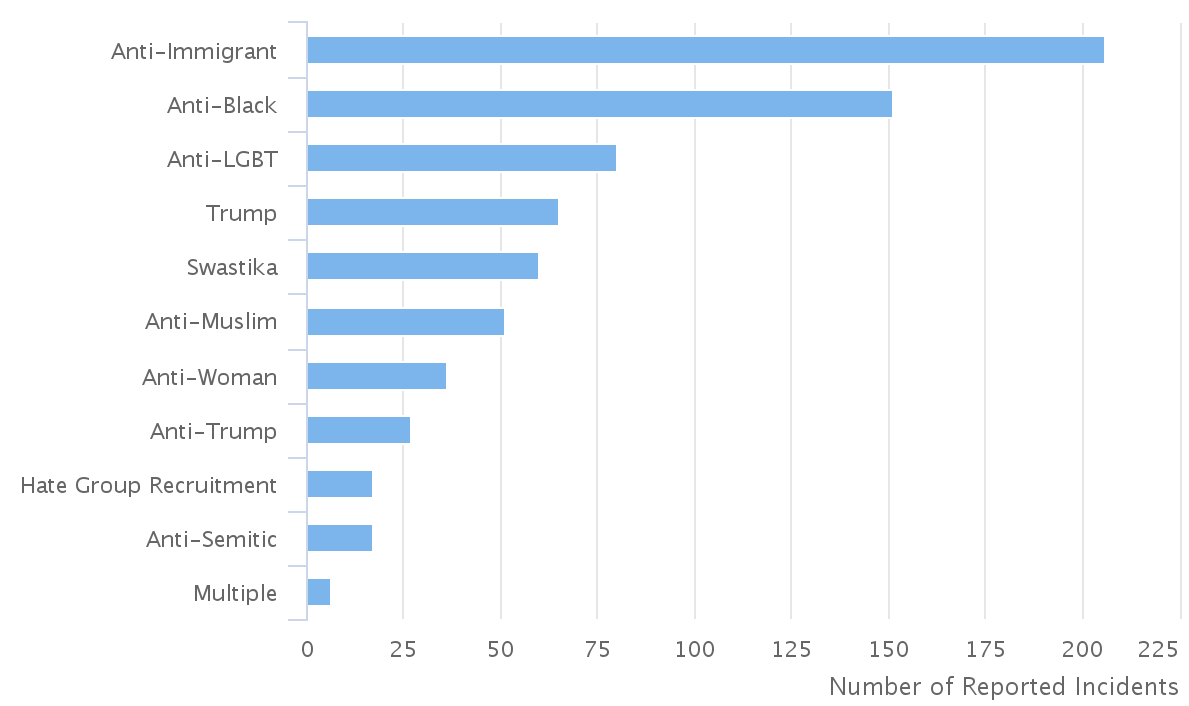 Fourth and finally, Professor Parmar writes that the “… American people showed they would not stand for more elite politics and narrow economic agendas of the hard right. A great foundation upon which the politics of the next decade is to be built.” Professor Parmar no doubt bases this argument on the indisputable fact that Trump does not live in the rhetorical flourish of free trade, slashing welfare, and de-funding core liberal programs such as Head Start or Planned Parenthood. Vermont Senator Bernie Sanders also kicked up quite a bit of anti-establishment dust, much to the delight of liberal academics, young (mostly) bi-coastal and Great Lakes’ students, and whatever if left of unionized workers.  Even Hillary Clinton had to make an awkward U-turn on the TPP trade agreement. So yes, there is a basis to make the claim above. Yet I very much doubt, that “2016 showed that the majority of Americans have had enough of capitalist elites…”. On the contrary, Americans took the capitalist elites who were in the background and put them directly in charge. Moreover, the American people (itself an ideological construct which was redeployed to mean the supposedly ‘left behinds’), actually replaced surrogates of the ruling class with a racist, nativist, misogynist and capitalist, who though not yet in office, has already embarked on building a new race-class configuration.

January 5th, 2017|Elections and party politics across the US, Randolph B. Persaud|0 Comments
Previous post Next post