After 9/11, Muslims in the US experienced a marked increase in hate crimes. In new research, Eric Gould and Esteban Klor find that this increase in hate crimes against Muslim immigrants led to the Muslim community retreating from assimilation and becoming more traditional and more cohesive. What’s more, they write, the rate of assimilation of Muslim immigrants was slower in parts of the United States where there was a more intensive backlash.

The 9/11 terror attacks by radical Islamic groups caused a definite backlash against the Muslim community as a whole; FBI data on the incidence of hate crimes against Muslims, show an increase from 28 reported incidents in 2000 to 481 in 2001. Did this backlash increase the cost of assimilation for Muslims in the US?

We examined whether this backlash slowed the rate of assimilation by making use of variation across states in the number of hate crimes against Muslims in the wake of the 9/11 attacks. We found that the attacks induced a backlash that made the Muslim community in America more traditional in terms of marrying within the community, producing more children and having lower rates of female participation in the labour force. Analysing individual-level data from the Census and American Community Surveys between 1990 and 2010, we found that after 9/11:

Our findings raise the possibility that terror groups may intentionally induce a backlash on persons of a similar ethnic origin in the targeted country, in order to decrease their rate of assimilation. As a consequence, terror attacks against Western targets may have a long-term political and socio-economic impact, by creating a more insular and disconnected Muslim community in this generation and also the next.

For example, Figure 1 shows that changes in the state-level intra-marriage rate between 2000 and 2010 are correlated with the state-level changes in Muslim hate crimes per capita. For both men and women, there is a statistically significant positive relationship, showing that the assimilation rate of Muslim immigrants was indeed slower in places that experienced a more intensive backlash. 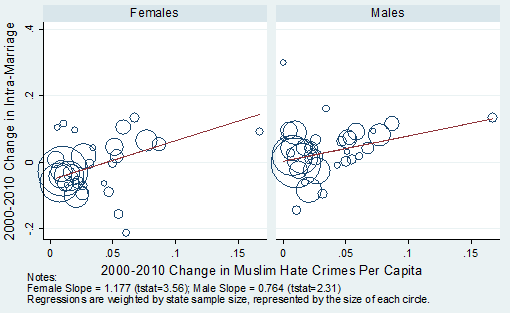 Note: Means by state for sample under age 41

Our results are not due to pre-existing trends in the assimilation outcomes of Muslim immigrants across states, and they are robust to inclusion or exclusion in the analysis of a wide array of personal and state-level characteristics. In particular, our study shows that Muslim immigrants were reacting specifically to hate crimes against Muslims, after controlling for the level of hate crimes against other groups.

Although the analysis uses data from the United States, our results are highly relevant for Europe for several reasons:

The assimilation of Muslim immigrants is a much larger public issue in Europe than in the United States. This is probably because of the larger scale of the immigration wave and perhaps a result of the lower education levels of Muslims who migrated to Europe compared with those in the United States.

Our findings shed new light on our understanding of the increasing use of terror attacks on Western countries, with the concurrent rise in social and political tensions surrounding the assimilation of Muslim immigrants in Europe and the United States.

This article is based on the paper, ‘The Long-run Effect of 9/11: Terrorism, Backlash, and the Assimilation of Muslim Immigrants in the West’ in the Economic Journal.

Eric Gould – Hebrew University of Jerusalem
Eric Gould is a Professor of Economics at Hebrew University, and a Research Fellow at the Center for Economic Policy Research in London (CEPR), a Research Fellow at IZA in Bonn, a Fellow at the Centre for Research and Analysis of Migration (CReAM) at University College London. His research focuses on various empirical issues, such as the causes and consequences of increasing income inequality, marriage market behavior, the economics of crime and terrorism, education, the effect of the environment on the economic and social outcomes of individuals, and immigration.

Esteban Klor – Hebrew University of Jerusalem
Esteban Klor is the Herczeg Family Associate Professor and current Chairman of the Department of Economics at The Hebrew University of Jerusalem. He is also a Research Fellow at the Centre for Economic Policy Research in London (CEPR). Most of his research focuses on two subject areas within the field of Political Economy: Terrorism and Political Violence, and Positive Studies of Taxation and Redistribution.