In recent years, advocacy groups have turned to social media to influence public opinion and the policy process. While groups have long written press releases, published news articles, and even maintained e-mail lists to build and expand their support base, these methods are limited in their reach and often costly to execute, especially for small groups. Social media provides a unique opportunity for advocacy groups of all sizes to attract members and promote their policy positions to wider audiences with relatively smaller investments of time and money.

In our recent research, we examine how two opposing advocacy groups use social media—Twitter—to disseminate their policy positions and to influence the policy process. How do they structure their messages on social media? Do they use familiar forms of communication like stories (narratives) that contain characters, plots, and settings? If so, what do their narratives look like and why? These are important questions because emergent research in public policy, political science, communication, and psychology suggests that people use narrative forms to simplify and make sense of the world around them.

To answer these questions, we use the Narrative Policy Framework, an emerging “theory of the policy process”, to analyze 245 tweets from Greenpeace Nuclear (an anti-nuclear advocacy group) and 458 tweets from the CASEnergy Coalition (a pro-nuclear advocacy group). While previous research has found that advocacy groups frequently present policy positions in the form of narratives in articles and other types of media, we wanted to see if these same narrative/story components are present in social media messages. Despite their 140-character limit, we find that the majority of messages (tweets) published by these groups, contain the core elements of a policy narrative—at least one character (a hero, victim, or villain) and a basic plot or policy position. Additionally, we find that groups use their narratives strategically based on their position in the policy arena.

While the proportion of tweets that contain the core narrative elements is similar across groups (51 percent for CASEnergy Coalition and 51 percent for Greenpeace Nuclear), we find the plot lines and cast of characters used look very different. As shown in Figure 1, CASEnergy Coalition, a member of the winning side in nuclear energy policy, commonly features anthropomorphized heroes, such as nuclear energy that “saves the people” from cold weather by providing electricity and warmth. 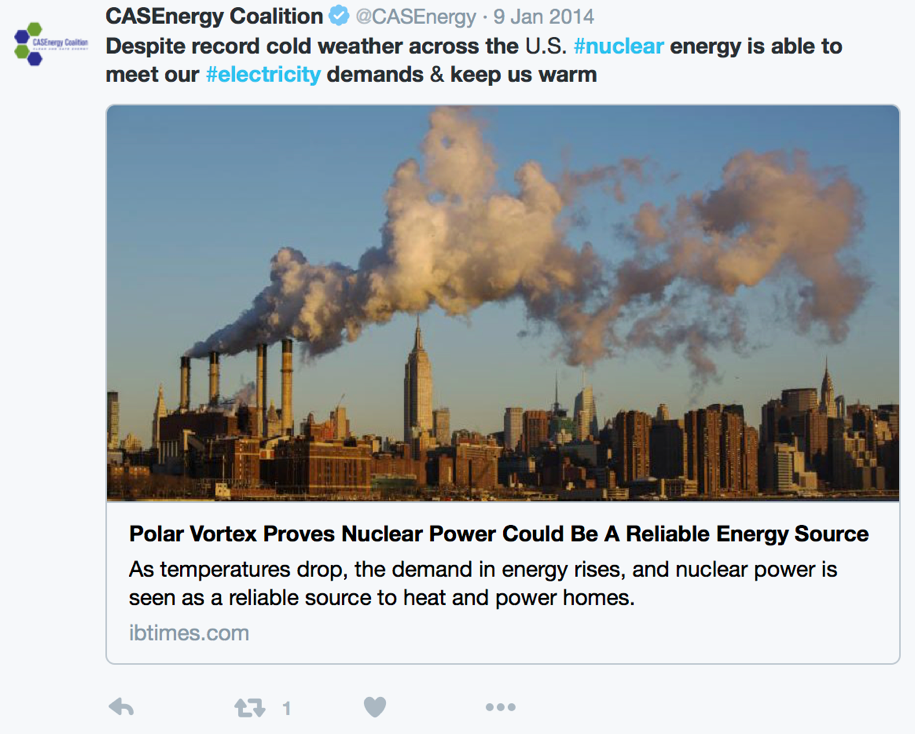 Greenpeace Nuclear, by comparison, tends to neglect heroes while emphasizing villains (i.e., the nuclear industry) and victims (i.e., Uranium workers). This distinction is important as new research has shown that character choices and plot lines may influence the power and persuasiveness of a narrative. Stories that feature heroes, for example, are especially persuasive.

In addition to selective use of characters, advocacy groups often use narrative strategies to manage the “scope of conflict” surrounding the issue they care about. Groups that are losing in a policy arena try to expand the number of actors that are involved in the fight. Groups that are winning try to restrict the number of actors that are involved. To accomplish this, losing groups like to highlight the widespread costs of current policy, whereas winning groups focus on the diffused benefits of current policy. When they break with these tendencies, they do so in specific ways—losing groups concentrate benefits to a narrow set of people/groups and winning groups concentrate costs.

Our findings are significant for multiple reasons. First and foremost, they add to a growing literature on the way that advocacy groups use “new media” to influence public opinion and the policy process by way of policy narratives. We show, in contrast to prior research, that groups are able to construct narratives in individual tweets. Additionally, we expand upon other studies of social media that have primarily focused on YouTube, a social/new media more obviously fit to portraying narratives.

Second, our findings show that groups are using Twitter to disseminate their narratives, which is somewhat unexpected given the space limitations of 140 characters or less. This space limiting feature likely forces groups to simplify their narratives and/or prioritize some narrative elements or story lines over others. This process of prioritization may provide additional insight into what groups are thinking about when telling their stories.

This article is based on the paper, ‘Advocacy Group Messaging on Social Media’, in the Policy Studies Journal.