Most academic research into minorities who run for office has been focused on African-Americans and Latinos. But how does race affect the electoral chances of Asian- Americans? In new research, Neil Visalvanich examines how voters support for candidates changes depending on whether or not the candidate is white, foreign born, or Asian-American. He finds that across all ideologies and information levels, voters prefer Asian-American candidates.

President Obama’s election as President of the United States a little over 8 years ago was historic for many reasons.  Among those reasons was the fact that it represented the first successful election of a minority candidate to the office of the Presidency for the first time in American history.  Subsequently, the Obama era saw increased number of minorities seeking office at every level of government, from Congress to the state legislative and local level.

While most of these minority candidates have been African-American or of Latino descent, the last 8 years has also seen an increase in South and East Asians seeking office as well.  For instance, 2016 saw the election of Tammy Duckworth to the US Senate from Illinois, to the Senate seat once held by Obama himself.  Research on black and Latino candidates have found that people often ascribe race based stereotypes onto their candidates, especially in elections with low information.  Blacks and Latinos are generally stereotyped as being more liberal and less competent than white candidates, and it is widely speculated that these often negative stereotypes hurt Obama during his term, despite his historic victory.

On the other hand, relatively little research has been done about Asian candidates in America.  In my research, I explore how race affects these candidacies.  I do this through a series of experiments that takes into account the different racial stereotypes unique to Asian-Americans in order to see how these stereotypes impact Asian candidates. I find that Asians may actually be at an advantage compared to whites when running for office.

As the basis for my experiments, I incorporate the distinct racial-political stereotypes that are common for Asians in America.  Unlike black and Hispanics, Asian in America are generally distinct from their minority counterparts.  East and South Asian communities are generally wealthier and more educated than even whites themselves.  This leads to the stereotype that Asians are a “model minority,” who, unlike their black and Hispanic counterparts, are successful and hardworking.

On the other hand, Asians are also a predominantly immigrant community and are consequently seen by many as “perpetual foreigners.”  Less insidious versions of this stereotype peg Asians as inscrutable and a source of ridicule, as seen in the Fox News video below.  More insidious versions of this stereotype portrays Asians as a having suspect loyalty to the United States.  This has, at times in American history, has resulted in infamous policies such as the Chinese Exclusion Act of 1882, which barred immigrants of non-European descent from entry into America, or Japanese internment during World War 2.

In order to examine the potential effects of each of these stereotypes, I run three different experiments that feature the political biographies of two political candidates running against one another for local political office.  In each experiment, the content of the biographies stays the same, but the name and the picture of the candidate that is attached to each biography is randomly selected for each respondent.  The first experiment provides very minimal information about both candidates.  This experiment is meant to examine the effect of race when respondents know relatively little about the candidates, and I specifically look at whether voters will impute either the “model minority” or the “perpetual foreigner” stereotype onto an Asian candidate for which they know little about.  The second experiment gives each candidate a “liberal” or “conservative” biography that emphasizes political ideology, in order to examine whether these prevailing stereotypes still hold after more conventional political cues are added.  The last experiment gives feature two candidates running against each other who are either “foreign” or “native born.”  The foreign Asian candidate in this experiment features a candidate with foreign name who was born in China.  Conversely, the foreign white candidate is given a foreign sounding German name and is shown to have been born in Germany.  This last experiment is meant to test whether emphasizing foreignness has an effect on how whites view Asian candidates. 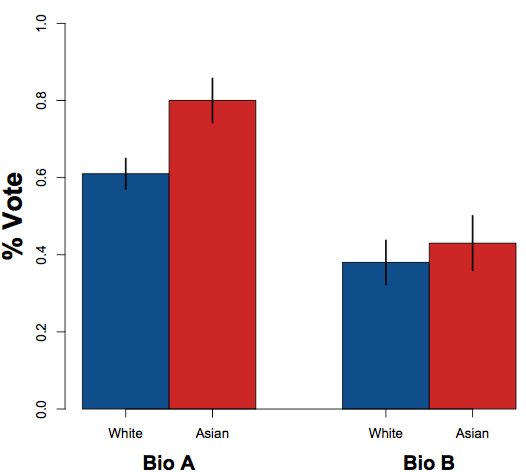 Figure 2 shows the results from the second experiment that adds in ideological cues to the experiment.  A comparison between Asian and white candidates with similar ideological backgrounds shows that the advantage for Asian candidates persists even when these cues are added, although the strength of the advantage is significantly diminished. 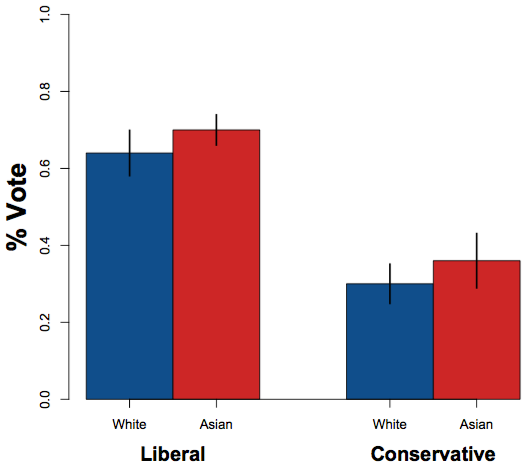 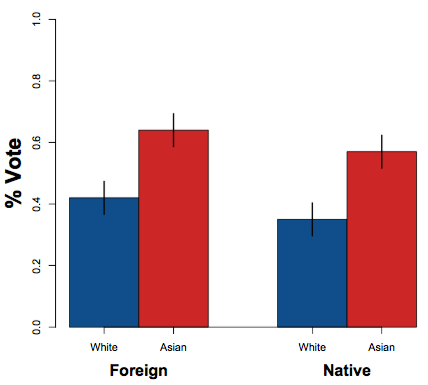 My research finds that, Asians may actually be advantaged when it comes to seeking political office.  Why might we have observed these unorthodox findings?  One possible explanation is that in contemporary America, Asians are not considered to be as great of a “foreign” threat as Muslims or Hispanics.  While in the past, different Asian countries have been viewed with hostility, at the time of this study Asians were not considered to be a hostile threat to America.  With the election of President Trump and his rhetoric around trade, Chinese trade in particular, we may see a shift back to viewing Asians as foreign threats.

This article is based on the paper ‘Asian Candidates in America: The Surprising Effects of Positive Racial Stereotyping’ in Political Research Quarterly.

Neil Visalvanich – Durham University
Neil Visalvanich is a Lecturer in the School of Government and International Affairs at Durham University. Neil focuses on studying politics in America, and is particularly interested in the politics of campaigns and elections, as well as the influence of racial and ethnic diversity on political institutions, mass political behavior, and public opinion.