As we face the potential for a 21st century version of the Cold War, Jonathan Schroeder and Janet Borgerson take a close look at how cultural conflicts from the 20th century version spilled over into American life – specifically into vinyl LPs. They write that such albums featured attractive images of the American lifestyle, subtle elements of the ideological struggles of the Cold War era.

As talk of a new Cold War between Russia and the United States grows, it is useful to look back at the influences of its 20th century namesake. Cold War cultural conflicts have often been discussed in the context of art, film, furniture, magazines, radio, and popular exhibitions. For example, the US Department of State sent jazz musicians around the world, including to the Soviet Union, as “jazz ambassadors” of the American way of life. However, few accounts of Cold War cultural diplomacy mention vinyl record albums. Yet, when looking closely at midcentury vinyl LPs, an overarching sense of how the Cold War trickled down into popular culture artifacts becomes apparent. Indeed, the battle raging between the two superpowers encroached upon the design, music, and marketing of mainstream albums. Midcentury vinyl LPs – records featuring the Cuban playground, released before Castro; jazz albums adorned with abstract art; and lifestyle LPs that featured attractive images of appliance-filled kitchens – appear as subtle elements of the ideological struggles of the era. 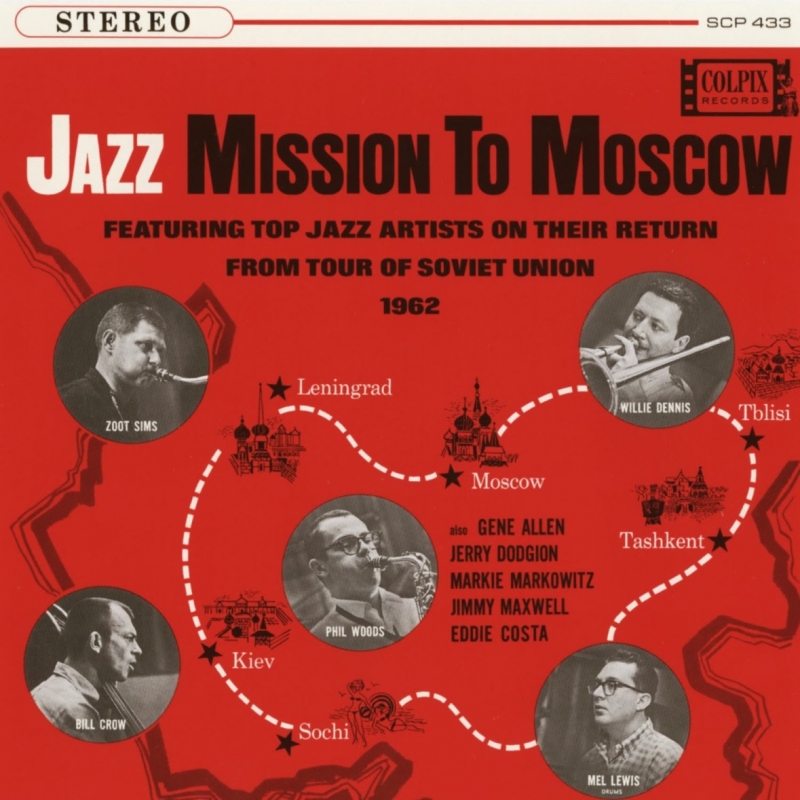 It is not surprising to find that events overseas during the Cold War influenced US record album covers of the 1950s and 1960s. These vinyl LPs served as an essential information distribution format and portrayed such domestic concerns as ideal lifestyles, family bonds, and how to entertain at home. Album covers also helped US citizens to imagine traveling the world. From details of kitchen design to voices of the lunar landing, records express, and make subtle arguments for, the superiority of democratic capitalist freedoms in contrast with Soviet life.

Consider an example: The American National Exhibition was held in Moscow in 1959. This forty-two day trade fair was designed by celebrated modernist George Nelson and promoted US lifestyles in contrast to Soviet priorities. The film Glimpses of the USA, a multi-screen spectacular which revealed intimate details of US landscapes and life, by American design team Charles and Ray Eames, was shown on giant television screens. During the United States Information Agency sponsored fair, four times a day, backyard barbecues, country-club dances, weddings, and honeymoons were enacted for audiences. In these classic American rituals, one finds notions of romance, love, individual freedoms, and family values, each of which figured in attempts to articulate aspects of US superiority over the gloomy communist alternative, which was often portrayed as disregarding aspects of individual attachment, desire, and welfare in favor of political and cultural ideology. 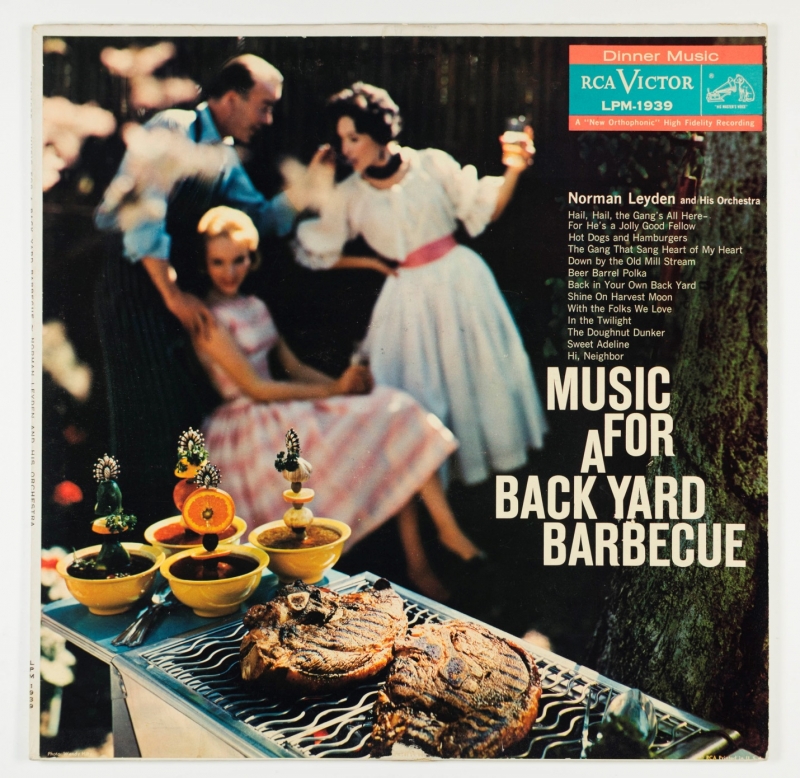 These “rituals of family life” at the Moscow exhibition appear frequently among a certain segment of post-war LPs: albums from RCA’s “Music for Hi-Fi Living” series include titles focused around a country club dance, as well as two weddings and a honeymoon scenario. Columbia’s “Music for Gracious Living” albums feature a barbecue LP and an After the Dance LP, and RCA’s “Dinner Music” series includes Music for a Backyard Barbecue. Many “honeymoon” albums promote jaunts to New York and Hawaii. LPs featuring exotic countries, and their music, often pictured airplanes, with honeymoon and anniversary travel a key motivation for going “away.”

For those who grew up after the 1950s, it can be difficult to believe that Cuba represented glamorous, cultured, and well-heeled travel in the US imagination. Yet, Cuba served as a popular destination for tourists and honeymooners for decades before the Castro revolution. Cuba inspired an entire genre of LPs, some sponsored by Hilton Hotels and Cook’s Tours, many others driven by the Latin dance crazes of the era. For Americans, such romantic visions vanished after Cuba’s communist revolution in 1959. Cuba became off-limits for United States citizens, and Cuban albums all but disappeared. Opening a window on a very different era of US-Cuba relations, midcentury “Cuban” albums provide a fascinating glimpse of the former fashionable hotspot that anchored a crucial site of the Cold War close to home. 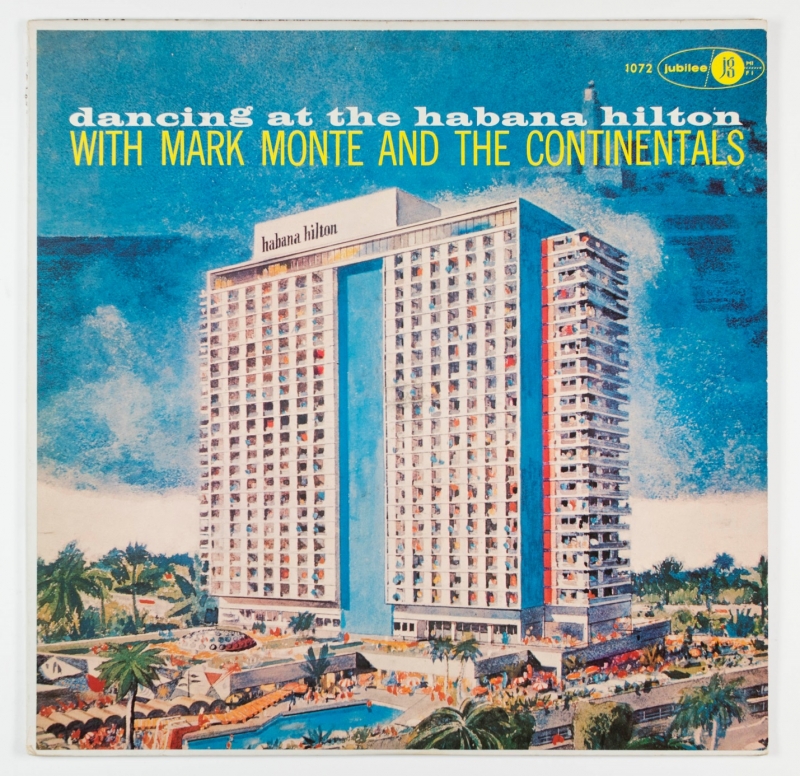 As an example, the cover of 1959’s Dancing at the Habana Hilton with Mark Monte and the Continentals shows the high-rise Havana Hilton hotel, which was built following a pro-development push by the Batista regime. The Hilton had been open for only a few months before becoming engulfed in the Cuban revolution, and when rebel forces reached the capital, they confiscated the luxury hotel for their provisional headquarters and later renamed it Hotel Habana Libre. 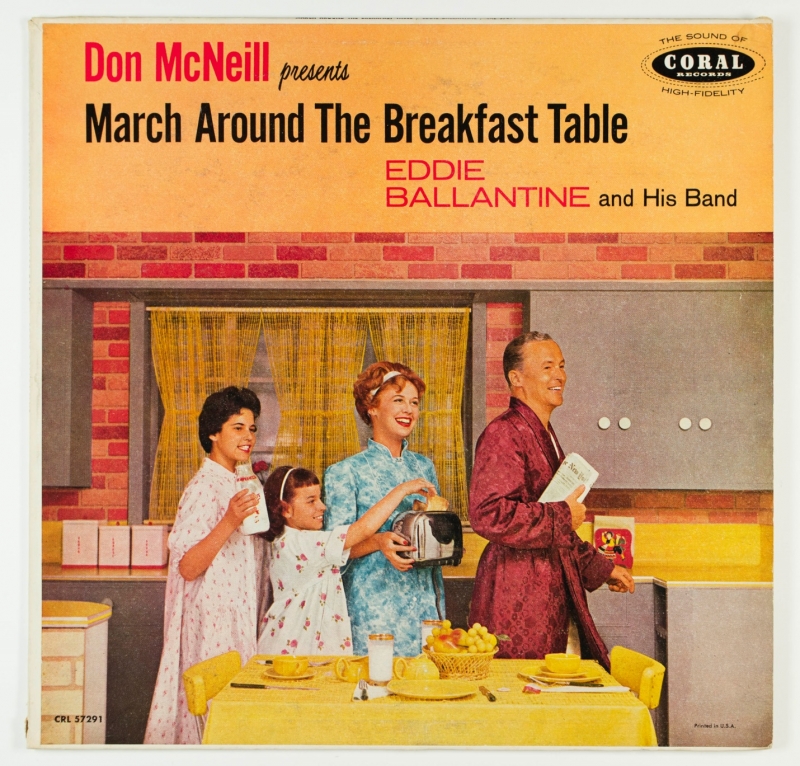 The kitchen, a paragon of domestic comfort, family togetherness, and modern technology, entered the Cold War fray. The infamous 1959 “kitchen debate” between US Vice President (and presidential hopeful) Richard Nixon and Soviet Premier Nikita Khrushchev took place in front of a display of lemon yellow General Electric appliances. This vibrant yellow appears in different forms in many album cover photos, including the breakfast dishes in the kitchen on 1959’s March Around the Breakfast Table, an LP tie-in to a popular NBC morning radio broadcast. One sees the strategic importance of focusing on certain consumer goods, and the contemporary consumer lifestyles these make possible. For example, images of the convenience, comfort, even glamour, of automobile ownership or the updated refrigerator abound in midcentury media. Concerted efforts at communicating these messages appear in the humble form of the album cover.
A key tenet of Soviet Cold War propaganda maintained that the United States lacked a distinctive or historically developed culture of its own. Indeed, America was castigated as obsessed with uncultured entertainments, trivial consumer choice, and ephemeral distractions. To counter such assertions, the United States harnessed unexpected cultural forces as symbols of affluence, freedom, and individual expression. Design, music, and painting that traced their origins to American culture—for example, American modernism, jazz, and abstract expressionism—indicated that the United States no longer needed to refer back to the Old World for artistic direction, but was positioned to take contemporary society forward with its own aesthetic values and cultural contributions. 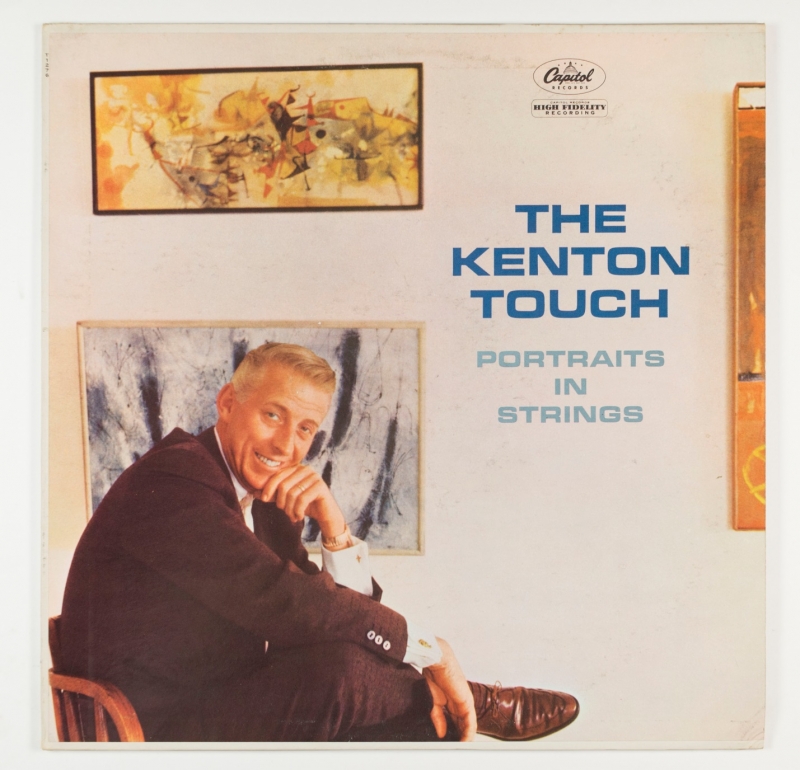 To be sure, modernism represented disparate movements within a variety of cultural arenas, tenuously linked together via a sense of rebellion against tradition. Modernism in art, music, and design often sets the stage in midcentury album covers. For example, The Kenton Touch: Portraits in Strings, from 1960, features popular bandleader Stan Kenton, known for bringing Latin sounds into jazz. On the cover, a debonair Kenton sits in front of several abstract paintings, connecting the expressive qualities of musical and visual form, and bringing modernism into the mainstream American household.

The Cold War suffused contemporary living in the United States, and the American home was central to conflicting visions of a good life during a period dominated by dueling superpowers and concerns to “contain” Soviet Communism. In the United States, individuals were understood to have the freedom to make their own lives, in part through their access to a wealth of available resources, including affordable consumer goods and services. The “sovereign,” or self-determining, choices they made among these available options marked a key distinction within US-Soviet propaganda battles. In this sense, consumption and daily practices in a consumer culture brought the Cold War into the home, and record albums played a colorful role. Mid-century LP covers strategically communicate postwar innovations and imaginings—technological, cultural, social—that continue to differentiate, in fantasy and in real lives, US consumer culture from much of the rest of the world.

Note:  This article gives the views of the authors, and not the position of USAPP – American Politics and Policy, nor the London School of Economics.

Borgerson and Schroeder are coauthors of From Chinese Brand Culture to Global Brands: Insights from Aesthetics, Fashion and History (Palgrave Macmillan 2013), and Designed for Hi-Fi Living: The Vinyl LP in Midcentury America (forthcoming, MIT Press 2017).