Since the 1990s, state governments have introduced policies to encourage greater school choice, with one aim being that high-income families concentrate less on particular schools. In new research, Sylvia He examines the relationship between house prices and school quality in Orange County, California between 2001 and 2011. She finds that better schools are associated with higher house prices nearby, meaning that wealthy families tend to cluster around better quality schools. In light of these findings, she writes that school choice policies may face local resistance in wealthy communities, and that local governments need to do more to improve to foster school-community collaboration in low-income neighborhoods.

Since its introduction in the 1990s, school choice policy has relaxed the conventional school assignment mechanism and given parents more choice in their children’s education. This institutional change is a response to the large differences in school quality in many regions in the United States. Nowadays, most states in the country offer mandatory or voluntary intra- and/or inter-district transfers so that children are able to enroll in schools outside their regular attendance area. But has this policy changed the education landscape and homebuyers’ desire for quality public education? Evidence suggests that no major improvements have been made to narrow the gap between the rich and poor districts in a suburban county in the Orange County, Los Angeles region, and that richer families are still buying into neighborhoods with the best schools. 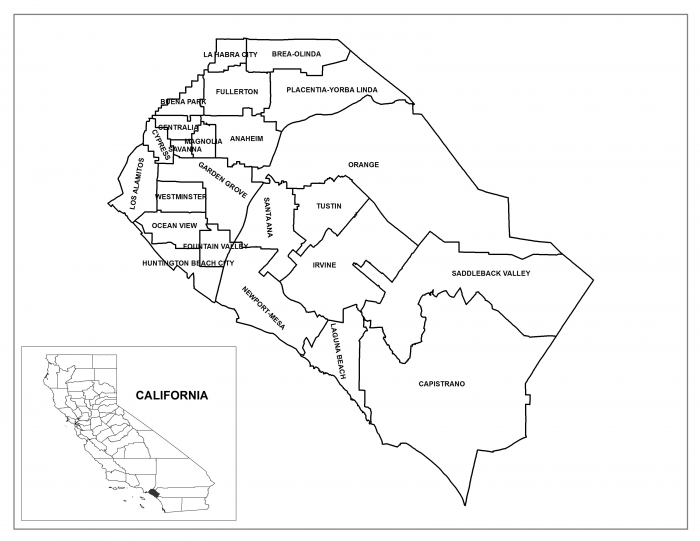 Using the residential house prices in Orange County, California, in 2001 and 2011, we estimate how much homebuyers are willing to pay for school quality, which is approximated by a proficiency score – the Academic Performance Index (API). First available in 1999, the API measures a school’s academic performance and growth based on the test scores of those students in Grades 2 to 11 who participate in the Standardized Testing and Reporting (STAR) Program and the California High School Exit Examination. The API scores are calculated by the California Department of Education (CDE) and disseminated directly to schools and districts.

There were 370 elementary schools in 24 elementary and unified districts in 2001 and 391 in 2011. While each district has a reputation for its education quality, within most districts there is still a noticeable variation in school performance (Figures 2 and 3). 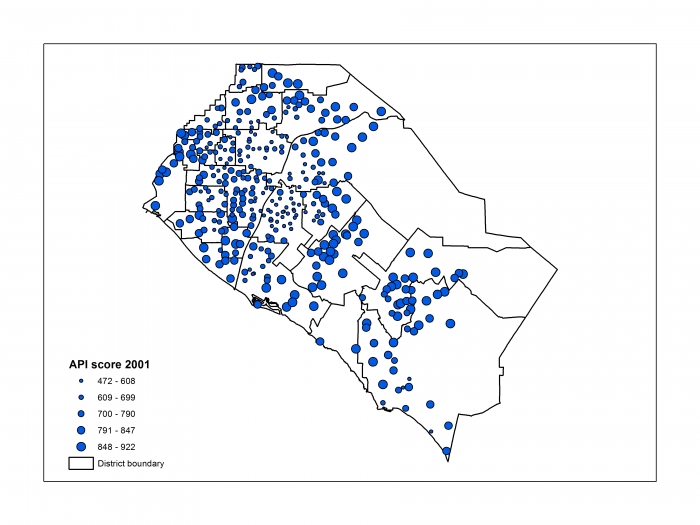 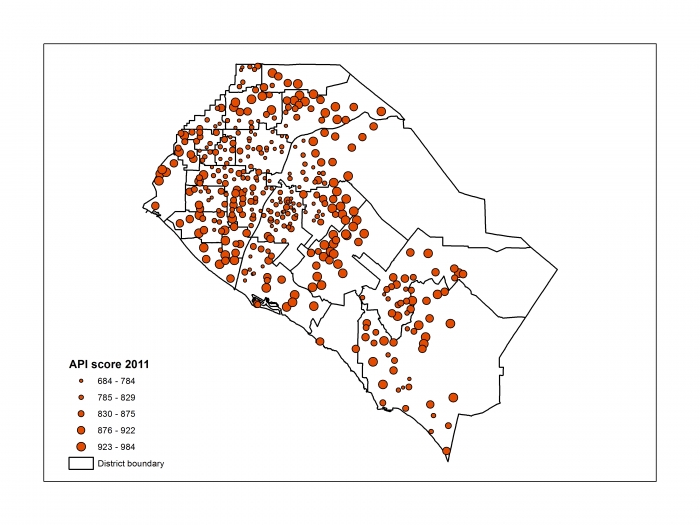 Our data shows that proximity to a good school increases housing prices significantly. In general, the districts with the most expensive houses were more likely to be associated with higher API scores, whereas the least expensive districts were mostly associated with lower API scores. Nevertheless, the relationship between average house prices and school quality at the district level is not necessarily linear.

Whilst the house price effect of school quality justifies government intervention for more school choices for low income households, the high premiums homebuyers have paid for school quality and their efforts in maintaining the status quo suggest that school choice policy may encounter a certain degree of local political resistance if the benefits and entitlements of the local residents are affected, such as the loss of their guaranteed admission to the neighborhood school and lower property values due to the number of transfer students from other districts. Meanwhile, school choice policy allows children from poor neighborhoods/low performing districts to leave their home district, which would likely weaken their association with their neighborhood and hence disincentivize them to make improvements to their own neighborhood schools.

Our research findings have two main implications for urban policy. First, the premium on house prices that being close to good schools brings is present across a relatively large geographical area. Higher house values encourage homeowners to make school quality improvements in their own areas. This difference in incentives may lead to a widening gap in school quality because homeowners in low-income neighborhoods who don’t see house price benefits have much less incentive to invest in their local schools, and this may not be beneficial for community development in the long run.

Hence, our empirical findings justify government intervention to improve public education quality in low-performing districts. Such public policy may be more effective if we take a community development approach and foster school–community collaboration rather than focus narrowly on education reform within schools. In other words, education improvement in low income neighborhoods would be better linked to urban renewal and community reform.

Second, knowing the high public education premiums paid by homebuyers, we may expect the boundary effects to persist. These boundary effects reflect the common interests and preferences of rent bidders, which in turn reinforce the autonomy of each school district. Urban education policies, such as the interdistrict transfer program that aims to improve social mobility and equality by offering more school choices, may encounter resistance from existing landowners if such policies threaten to weaken the boundary effects and depreciate the school premiums that the homebuyers have paid.

In this sense, our research helps to explain the obstacles to the implementation of the interdistrict transfers program and its relatively limited scope, both since it began and in the near future.

This article is based on the paper, ‘A hierarchical estimation of school quality capitalisation in house prices in Orange County, California’, in Urban Studies.

Sylvia He – Chinese University of Hong Kong.
Sylvia He is an Assistant Professor in the Urban Studies Programme and the Department of Geography and Resource Management at the Chinese University of Hong Kong. Her research examines the role of planning and policy in shaping the spatial structure of cities and the behaviors of households and individuals. Her recent publications include “Shrinking cities and resource-based economy: The economic restructuring in China’s mining cities”, Cities, 60, 75-83, (2017) and “Incorporating institutional and spatial factors in the selection of the optimal locations of public electric vehicle charging facilities: A case study of Beijing, China”, Transportation Research Part C, 67, 131-148, (2016).