Young people may be turning away from traditional sites of politics, but that does not mean that they are apolitical. In a recent co-authored article, Ariadne Vromen argues that Facebook is an important site of political engagement for youth in the UK, US and Australia.

There can be little doubt that the institutions and practices of modern representative government have been subject to growing disillusionment from young citizens. A reluctance to vote at elections, join political parties or have a high regard for their politicians, all suggest that many young people are turning away from formal politics in many countries. Instead, engagement in alternative or new forms of political participation point to the possible displacement of traditional models of representative democracy as the dominant cultural form of engagement, by approaches increasingly characterized through networking practices.

The political identity and attitudes of young citizens are increasingly shaped by the social networks they themselves have had a significant part in constructing, and are underpinned by digital and networked communication technologies. Rather than disaffection, The Civic Network project has found that many young people are politically engaged on social media platforms, particularly Facebook. However, we also caution against generalizing to all young people. Significant barriers to engagement remain that have more to do with the structure, openness and appeal of broader political systems and processes. 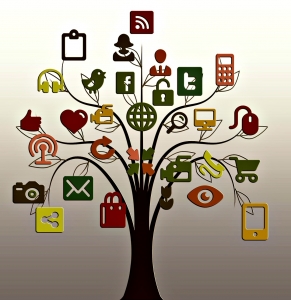 Around 90% of young people in our survey sample used Facebook. A majority of them hear about, learn about, and follow links to news stories about politics via Facebook. That Facebook is the first port of call, for a majority of young people, in finding out what is happening in the political world emphasizes its everyday ubiquity. It also highlights the importance of social curators within networks who provide links to news stories and share material posted by others for the majority to read and learn from. Figure 1 demonstrates there is symbolic communicative importance for many young people in ‘liking’ material their friends and connections post in their social networks. This simple act is politicised as it becomes the same as ‘sharing’, visible in friends’ newsfeeds, and shows both personalised social solidarity and networked political preferences. 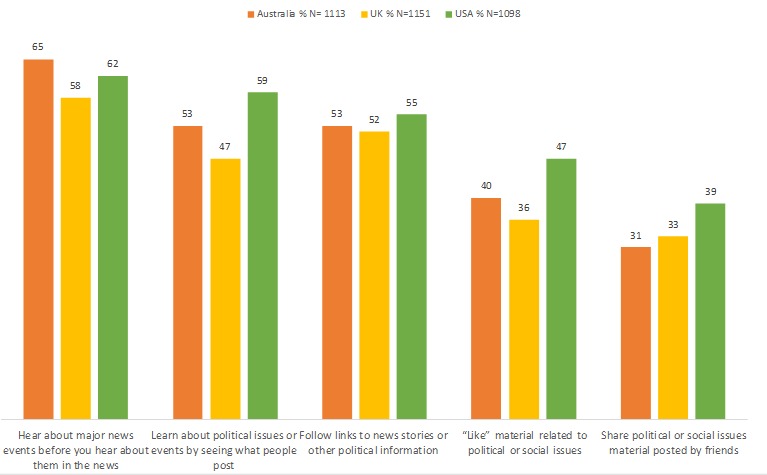 Proactive political engagement includes using Facebook to enable offline forms of political action or online political debate. Overall, these more overt actions are used less often by young people than communicative and symbolic forms of political engagement. Between 34-40% comment about politics on social media; partisan electoral-based politics in particular forms only a small part of most young people’s everyday experience on Facebook. The least common act of encouraging others how to vote suggests Facebook is not more conducive than traditional contexts as a space for young people’s election-based discussion. That young people in the USA were most likely to do all of the Facebook-based political acts, can probably be attributed to a presidential election having occurred in the year before the survey was in the field. Nevertheless, that only 19% of young Australians encouraged others to vote may be due to compulsory electoral registration and voting in Australia, and less focus on turnout and mobilization to ‘get out the vote’. 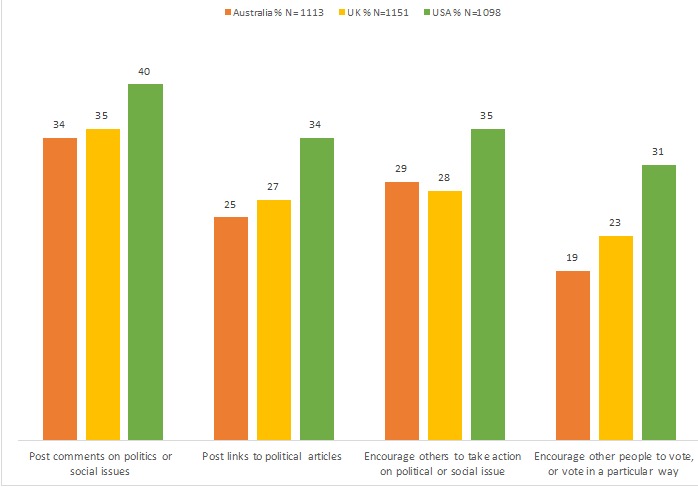 Only 6% of young people who use Facebook have never engaged in any of the nine acts in the two Figures. Considering just the proactive political acts on Facebook, we found that 73% had engaged in at least one of these 4 acts. This suggests that Facebook provides a low threshold for young people’s visible online political engagement, making it easier for them to make statements and interact with others within their online social networks.

However, young people have a considerable ambivalence about doing politics on Facebook, reflecting the high levels of scepticism and feelings of exclusion many young people hold about formal, electoral politics, in many advanced democracies. Our qualitative analysis revealed that young people believed ‘Politics’ was equated with conflict, and best avoided on social media. Politicians and parties rarely featured in their explanations, instead their disquiet was about the level of public disagreement with friends and family on a range of political issues. Others were concerned about saying something that was ‘wrong’; some were just interested in social media remaining purely social, thus seeing Politics as distinct and separate from their everyday lives. For example, the quote below reveals a sceptical viewpoint, suggesting that politics is better done in person where there is less chance of misunderstanding or conflict:

“I try to express my views more in real life than online because I don’t think people are able to handle those conversations maturely and people end up getting in fights that have nothing to do with politics and a lot more to do with name calling.” (Female, USA).

While in the minority, some young people were more positive about using social media for politics, as it was a useful source of information and an important space for political expression. The young people most likely to proffer this kind of view were politically engaged, but came from less privileged social backgrounds. For example:

“I do think it is good. Many people my age (early twenties) have switched off the traditional media, and it is rare to meet somebody who regularly watches the news or reads a newspaper. It is therefore important to spark their engagement in other ways. If they are actively reading, engaging, and being informed by conversations on social media sites, then it creates a more informed public” (Female, Australia)

Overall our survey of young people in the UK, USA and Australia demonstrated that social media, particularly Facebook, has become an everyday source of news and information on politics, and is increasingly used by young people to show a personalised, symbolic solidarity with political issues. Thus engagement via social media platforms is a form of political participation worthy of attention, and points to the utility of theoretical frameworks that focus on the emergence of new citizenship norms for interpreting and understanding this growing phenomenon.

There also remains an important interplay between the emergence of new, engaged and actualising norms of citizenship that foster everyday, individualised participation, with the maintenance of the ideal dutiful citizen. The turn to online political engagement does not politicise all young people, as significant barriers to engagement remain that have much to do with the structure, openness and appeal of broader political systems. If we want young people to feel efficacious, that their voices are heard, and their actions matter, then fundamental changes to the adversarial and hierarchical nature of formal politics itself will need to occur.

This article first appeared at the LSE’s British Politics and Policy blog, and is based on the author’s recently published co-authored article in the October 2016 issue of Political Studies.

Featured image: Tree by Geralt is licensed under CC0.