Cities of Color are a growing trend in America – and their long-term influence should not be underestimated.

Cities of Color are a growing trend in America – and their long-term influence should not be underestimated.

Race and place have become high profile issues in recent years. Russell M. Smith writes that issues surrounding urban segregation are also issues in new cities as well as established ones. In new research, he examines ‘Cities of Color’ – which may foreshadow the growth of multi-racial communities in the US – finding that they often form as a reaction to direct or indirect racism such as the under provision of public services.

Segregation is found not only in established communities in the United States. It is also a growing trend among new cities – and this dynamic has important implications for understanding the complex issues facing America’s urban areas. Media attention in recent years has focused on higher-profile issues of race and place, such as the controversial gerrymandering of political boundaries in Texas and North Carolina and police-involved shootings in Ferguson, MO., New York City, Baltimore, and Charleston, SC. A quiet and accelerating shift toward Cities of Color (or CoCs) deserves attention, too, for the glimpses it offers for the future.

Though cities, towns, and villages across America make up 19,000 units of local government, new municipalities are still being carved out of the political landscape. Between 1990 and 2010, in fact, more than 430 new municipalities were created in the US. In slightly more than 10 percent of them, the majority of residents were minorities, making these places Cities of Color. While media discussions of new cities tend to portray them as enclaves of the white and wealthy, new research offers a more nuanced view of what is really happening.

This research shows that majority-minority cities are predominantly located in the South and West regions of the US, with 68 percent of Cities of Color emerging in Alaska, California, Florida, North Carolina, Oklahoma, and Texas (see Figure 1). With their permissive annexation policies, abundant unincorporated territory, and rapid population growth, these states have been ripe for municipal incorporation activity.

Figure 1 – Distribution and Population Characteristics of Cities of Color, 2010 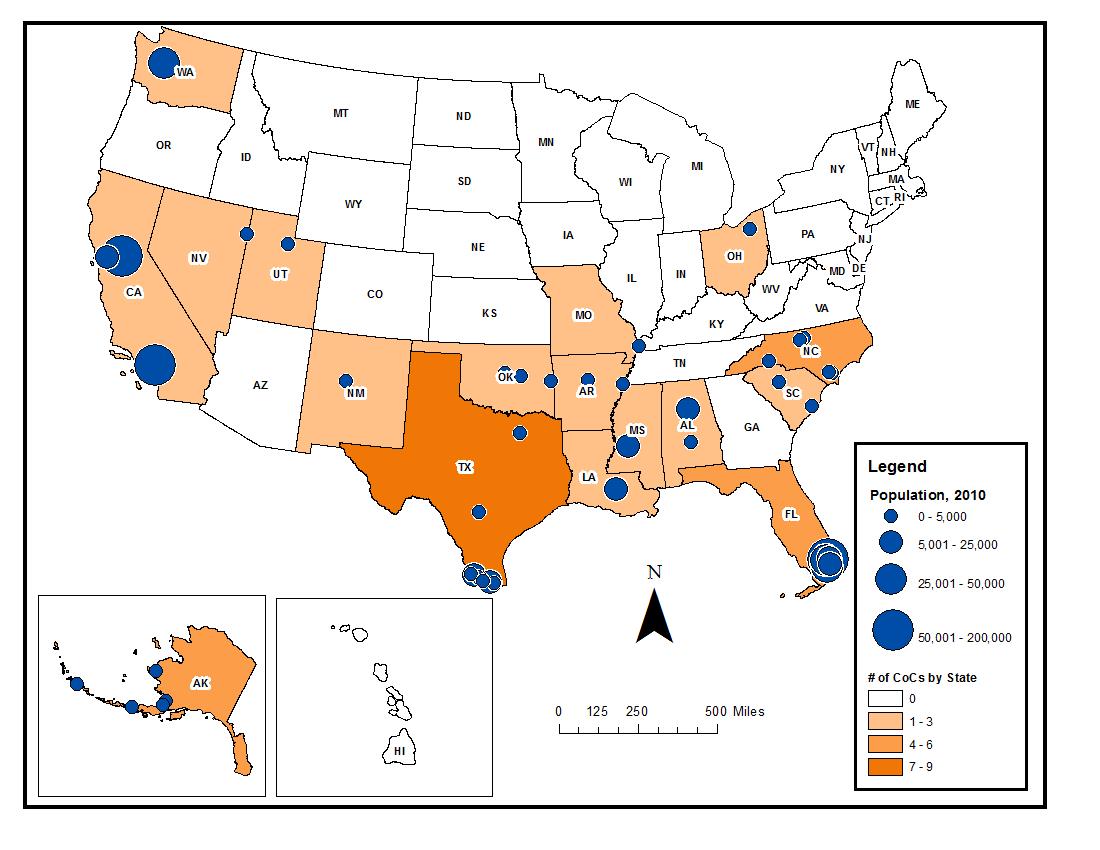 The residential populations that compose CoCs are diverse within themselves. Figure 2 shows the racial/ethnic composition of the newly incorporated Cities of Color and reveals that 44 percent of CoCs had majority African American populations. Hispanic CoCs were the next most common type of majority-minority municipal incorporation. Four CoCs did not have any majority race/ethnicity – potentially foreshadowing the growth of multi-racial/ethnic communities in the United States. CoCs with a majority Native American or Asian population were the least likely to form. 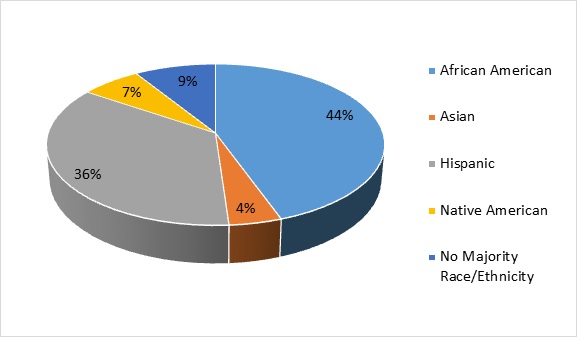 Ranging in population from a few dozen residents to more than 100,000 citizens, the average CoC has a population of approximately 13,000 residents, which is larger than a majority white new municipality incorporated during the same time period. This could be because incorporation proceedings for Cities of Color take a longer amount of time due to institutional racism, biases and/or less political clout.  Ultimately this delay results in larger population sizes by the time of incorporation. Among the other notable differences between CoCs and majority white incorporations:

The current trend toward the creation of CoCs has been slowly gathering momentum. Majority-minority communities were established decades ago, with varying success, in Nicodemus, KS, Newberg, KY, and Soul City, NC. There are several reasons why that trend has increased over the past 25 years. On the surface, it might appear that CoCs have the same motivations as majority white communities for incorporating – access to public services, revenue control and generation, dissatisfaction with county government, or protection of a community’s identity. But a closer look reveals some significant differences.

While race directly resulted in the incorporation of 11 percent of CoCs between 1990 and 2010, it also indirectly drove the creation of numerous other majority-minority cities. When compared to all new cities, majority-minority cities are far more likely to form to combat environmental justice issues or land-use related nuisances that disproportionately impact minority communities, such as large scale hog farms and hazardous waste plants.  CoCs also form as a reaction to direct or indirect racism, including the under-provision of public services and the refusal of majority white communities to annex majority-minority areas, often through a process known as municipal under-bounding. Overall, CoCs are considerably less likely than majority white communities to incorporate because of annexation threats or growth control issues.

Indeed, for some CoCs municipal incorporations can be viewed as a growing form of political resistance to racism, through which communities of color take ownership of their own future through the establishment of city limits. In all likelihood, this trend will continue. Demographers forecast that white residents of the United States will become the minority of the population by 2044. Meanwhile, the increasingly diverse American population will result in the creation of more CoCs and the American political landscape will likely be altered in ways that are not yet possible to predict.  However, a growing number of CoCs could potentially foreshadow increases in levels of segregation, conflict over land uses and the distribution of affordable housing within metropolitan regions.

This article is based on the papers, ‘New Cities of Color: Socioeconomic Differentiation between Majority–Minority New Cities and White New Cities’, in State and Local Government Review, and ‘Why majority-minority cities form: non-White municipal incorporation in the United States, 1990–2010’ in Urban Geography.

Russell M. Smith – Winston-Salem State University
Russell M. Smith is an associate professor of geography in the Department of History, Politics and Social Justice at Winston-Salem State University.  His research interests include local government boundary change and urban sustainability. He is especially interested in exploring race, place and issues of urban planning.  He has been published in Urban Geography, International Journal of Urban Sustainable Development, Journal of Planning Literature, and State and Local Government Review.  Dr. Smith is finishing his first book, titled Municipal Incorporation Activity in the United States: Patterns, People and Procedures, which is expected to be published in 2018.