Of the 27 Amendments to the US Constitution, less than a handful has been enacted in the past 50 years. So why is constitutional change so difficult in the US? Jim Zink argues that, in addition to difficult amendment procedures, the people’s “reverence” for the constitution makes them reluctant to consider changes to it. Using two studies, he finds that proposals framed as constitutional changes were far less likely to receive support compared to those framed as changes to existing laws.

Thomas Jefferson famously worried that Americans would look at their constitutions with “sanctimonious reverence,” as if a constitution is “like the arc of the covenant, too sacred to be touched.” Some contemporary constitutional scholars such as Sanford Levinson have argued that, after nearly 230 years of relative constitutional stasis, we can conclude that Jefferson was right to be concerned. While Levinson primarily blames Article V, which makes the US Constitution one of the most difficult in the world to amend, he argues that citizens’ thoughtless veneration of the Constitution compounds the problem: it has blinded them to the Constitution’s profound structural flaws and left them unwilling to even consider much needed constitutional reforms, thus making them complicit in the dysfunctional state of contemporary American politics.

This view, while plausible, rests on two related empirical assumptions that have not been directly tested: first, that individuals exhibit a specific “reverence” for a constitution and, second, that this sense of veneration biases them against changing the constitution. There are, after all, many reasons why individuals might resist changing a constitution that have little to do with reverence for it, such as general status quo bias or risk aversion. But does something like “constitutional veneration” exist in the US and, if so, does it act as an obstacle to constitutional change?

Christopher Dawes (New York University) and I set out to test these assumptions and found that many Americans in fact show a specific bias in favor of the constitutional status quo that counterbalances and can even override their policy preferences. This bias is distinguishable from plausible alternative explanations, such as general status quo bias, existence bias, and longevity bias.

In Study 1, we used the Amazon Mechanical Turk to isolate the effects of constitutional status quo bias at both the state and federal levels. We asked each respondent about their willingness to support hypothetical proposals relating to two substantive issues, collective bargaining rights and a policy that would require a legislative supermajority to approve tax increases. Respondents were randomly assigned to one of several conditions that asked them for their opinion on both proposals. These conditions differed only in that the issues were framed either as proposed changes to the state or federal constitution or as proposed changes state or federal law. The experimental design allowed us to directly compare individuals’ willingness to change a constitution with their willingness to change ordinary law in both the federal and state contexts, holding the policy issue constant.

We found that simply framing a proposal as a change to a constitution significantly reduces support for it relative to an otherwise identical proposal to change ordinary law. For example, as Figure 1 shows, 30.3 percent of our respondents opposed changing federal law to reinforce collective bargaining rights, but nearly 53 percent of respondents opposed the same proposal when it was framed as a change to the US Constitution. Similar results hold for both substantive issues and at the state and federal levels, although the results are weaker at the state level, which is consistent with the idea that individuals “revere” their state’s constitution less than the US Constitution. In fact, we speculate that our results at the state level are not a sign of individuals’ specific attachment to their state’s constitution but instead indicate that the symbolic significance individuals ascribe to the US Constitution translates into a more generalized, abstract attachment to constitutions in the US. 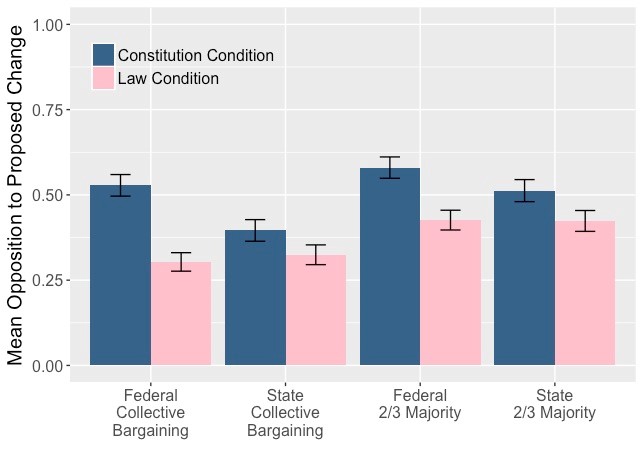 In Study 2, we studied real rather than hypothetical constitutional amendment proposals. During the week leading up to the November 2012 general election, we ran survey experiments in Michigan and California using the proposed state constitutional amendments and statutes on which respondents would actually vote on election day. Our Michigan survey asked each respondent about six items – five proposed constitutional amendments and one state law referendum – and our California survey asked about two items – one proposed constitutional amendment and one state law referendum – that would appear on the November 6 ballot. The basic experimental design is similar to that in Study 1. Respondents in each state were randomly assigned to the control or treatment conditions for each of the proposals on their state’s ballot. The control conditions simply asked respondents if they favored the policy embodied in the ballot measure. The treatment conditions used the same basic language as the control question, except they explicitly identified the measures as changing the state’s constitution (in the case of the 6 amendment proposals) or state law (in the case of the 2 state statute proposals). As in Study 1, simply highlighting the fact that a measure would change the state constitution significantly reduced support for the proposal. We did not find any significant effects for the two ordinary law treatments emphasizing the proposals’ changes to state statutory law. It is worth noting that voters rejected all five of the proposed constitutional amendments on Michigan’s ballot, despite the fact that pre-election polls showed that at least three of the five proposals enjoyed the support of a majority of voters.

For example, Congressional approval of the Federal Marriage Amendment, which would have amended the Constitution to bar same-sex marriage, seemed likely after Republicans used the promise of a federal amendment to ride public opposition to same-sex marriage to victory in the 2004 election. Yet, while the public strongly opposed legal recognition of same-sex marriages around that time – opposition ranged from 55 percent to 59 percent between 2004 and 2006 – support for a federal constitutional amendment never exceeded 47 percent. Indeed, shortly after that election, 57 percent opposed any such amendment. Same-sex marriage opponents in Congress similarly wavered on changing the Constitution to implement the ban. Democratic Senator Mark Pryor (AR), for example, defended his vote against the Federal Marriage Amendment by arguing that, although he opposed same-sex marriage and continued to “fully support” the federal Defense of Marriage Act, he could not support the proposed amendment in part because the issue, while very serious to him, was not sufficiently important to justify amending the Constitution. It would not be surprising if recent efforts to exploit anti-immigration sentiment to change the Constitution so it no longer provides for birthright citizenship falter for similar reasons.

Whether a bias against constitutional change is good or bad ultimately is a matter of perspective, but our findings provide important context for these normative debates. Our results lend some support to Levinson’s claim that constitutional status quo bias is problematic at the federal level, encouraged in part by a high amendment threshold that already makes constitutional change difficult enough, but they also suggest this bias may serve as a useful ballast for popular constitutionalism at the state level. Finally, although our study focuses on the US only, Ginsburg and Melton’s recent comparative analysis indicates that a country’s “amendment culture” is a better predictor of the rate of constitutional change than the relative difficulty of a constitution’s formal amendment procedures. This suggests that a similar bias or sense of “constitutional veneration” may be found in other countries.

Featured image: “National Constitution Center” by Jim, the Photographer is licensed under CC BY 2.0

This article is based on the paper, ‘The Dead Hand of the Past? Toward an Understanding of ‘‘Constitutional Veneration’’’, in Political Behavior.