How expanding Medicaid can help prisoners in the Southern states.

How expanding Medicaid can help prisoners in the Southern states.

While the Obama presidency saw the introduction of Obamacare and the expansion of Medicaid in many US states, President Trump’s administration may well roll back these reforms. Nickolas Zaller argues that while they can, Southern states should expand Medicaid, one effect of which would be to improve health outcomes for those involved with the criminal justice system. He suggests that in order to expand Medicaid, these states should focus on incremental change, re-brand Medicaid as a state led initiative, and link it to criminal justice reform.

Under the Trump administration, the future of healthcare and criminal justice reform efforts remains uncertain. Any policy changes will be particularly salient for the South, which experiences the highest incarceration rates (Figure 1), highest uninsured rates, and worst health outcomes in the US. Many states took advantage of opportunities created by passage of the Affordable Care Act (ACA) in 2010 to expand healthcare coverage to their poorest residents and develop partnerships between health and justice systems (Figure 2). Yet to date, only four Southern states have taken advantage of the ACA. Expanding Medicaid would provide them with the opportunity to significantly impact health outcomes for criminal justice-involved (CJI) individuals. We suggest the use of three strategies to implement Medicaid expansion across the South: focus on incremental change, rebrand Medicaid as a statewide initiative, and link Medicaid expansion to criminal justice reform. 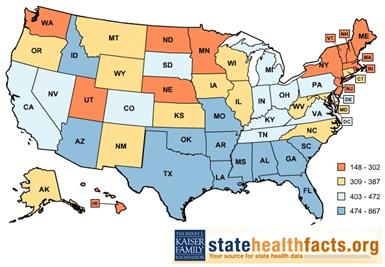 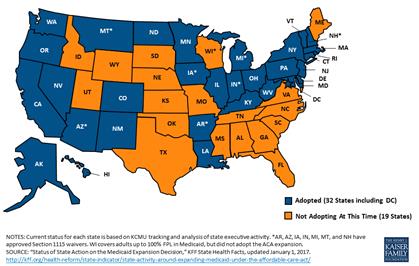 The US has the highest incarceration rate in the world.  Prisoners are significantly less healthy than the general population, as disproportionately high numbers of CJI individuals report chronic and often co-occurring physical, mental health, and substance use disorders (SUDs).

Nearly every Southern state has an incarceration rate that exceeds the national average. With less access to health services and more risk factors for morbidity and mortality prior to incarceration, people incarcerated in the South have relatively poorer health than those in other regions.  In 2010, Southern prisons held twice as many people with HIV/AIDS as Northeastern prisons, and five times as many as Western and Midwestern facilities.  Southern prisons also spend less money per patient for healthcare services, and have higher mortality rates, than those in other regions.  Of the total number of state prisoners who died between 2000 and 2012, almost half were incarcerated in the South.

The expansion of Medicaid eligibility, though optional for states, is the ACA’s central structural reform for addressing healthcare access related inequalities in the US. Historically, Medicaid benefits have only been available to impoverished children and their parents, pregnant women, and individuals with disabilities.  The ACA extended Medicaid coverage to childless adults with incomes up to 138 percent of the federal poverty level regardless of their personal or health status.

Data suggest that Medicaid expansion is associated with significant improvements in access to care and mortality – particularly among minorities and residents of low-income counties, compared with those in non-expansion states. Perhaps no single population stands to gain more from expanded Medicaid coverage than CJI individuals with their disproportionately complex health needs.  For example, it is estimated that one in six new Medicaid enrollees will be criminal justice involved.  In addition, expanded Medicaid funding can play a critical role in building and establishing treatment-based incarceration diversion programs and promoting continuity of care at release.  By increasing the number of people receiving treatment in community settings, states may be able to decrease their incarcerated populations—and their correctional spending.

Expanding Medicaid provides Southern states with the opportunity to significantly impact health outcomes for CJI individuals. To promote broader expansion of Medicaid in the South, we recommend that states: 1) Focus on incremental change; 2) Rebrand Medicaid as a statewide initiative; and 3) Link Medicaid expansion to criminal justice reform.

The two earliest adopters of Medicaid expansion in the South were Kentucky and Arkansas.  In 2013, Arkansas was the first state in the nation to adopt Medicaid expansion through the “Private Option,” which uses Medicaid funds to support enrollment in either Medicaid or private insurance plans. Pre-expansion Arkansas had strict Medicaid eligibility requirements and one in five adults were uninsured. In contrast, at the beginning of 2015, over 219,000 of 230,000 eligible people enrolled in the Private Option, and hospitals saw a 55 percent reduction in uncompensated care.

Kentucky opted to expand Medicaid coverage in 2014 with a focus on providing healthcare to its lowest-income residents.  During the first six months of operation, the number of uninsured residents was cut by nearly half, representing one of the largest reductions in the uninsured rate nationally.

Arkansas and Kentucky provide compelling evidence that incremental approaches can be successful even where there is political and ideological opposition to Medicaid expansion.  Other Southern states could use this strategy to gain support for healthcare reform.

Rebrand Medicaid Expansion to make it a State led initiative

Medicaid expansion in the South can move forward by rebranding it as a statewide initiative that is independent from highly politicized Obamacare.  In 2015, the Arkansas Times polled readers about the ACA.  When asked if they approved of the Private Option, a majority said yes.  But a majority opposed passage when the Private Option was presented as a component of Obamacare.  Subsequently, Arkansas’s rebranded “Arkansas Works” program was approved by the legislature. Other states have successfully rebranded their programs as state (not federal) driven efforts. For example, Kentucky’s Medicaid expansion program is called KYNECT. This approach may increase acceptance of Medicaid expansion among constituents and legislative bodies alike.

Government officials in Southern states increasingly support criminal justice reform as part of a growing conservative movement that recognizes corrections spending is out of control. The conservative approach, articulated by groups like Right on Crime, favors addiction and mental health treatment-based diversion programs as a less expensive alternative to incarceration.  However, the success of these treatment-based programs hinges on the accessibility of those services. Medicaid expansion is a sustainable solution for funding these programs to meet high needs.

Policymakers, community based organizations and individuals in the South who understand criminal justice reform’s importance must be strategic in linking Medicaid expansion to long-term cost savings.  They can look to their peers who have developed effective strategies to provide expanded health coverage to their citizenry despite immense challenges. Medicaid expansion states must conduct research to examine the impact of expansion on use of health services by newly enrolled CJI individuals and on recidivism.  Some Southern state leaders understand the relationship between CJ reform and Medicaid. A recent statement by Louisiana’s Health Secretary addressed the importance of “treating mental illness and addiction rather than incarcerating”.

Medicaid expansion is the solution

Given that Southern states have higher incarceration rates and experience worse health outcomes compared to other regions of the US, we recommend Medicaid expansion as a solution to improving health outcomes among CJI Southerners.  However, we acknowledge that while expanded insurance coverage is necessary, it is not sufficient to ensure their access to essential medical care. Guidance regarding best practices that show how Medicaid expansion can be leveraged to improve outcomes for formerly incarcerated individuals is urgently needed.  Finally, given the new political landscape nationally, state leadership must be pressed to promote their states as laboratories for experiments in healthcare reform. Southern states like Arkansas, Kentucky, and Louisiana can serve as examples for navigating the new policy landscape.

Featured image: “&quot;Save Medicaid + its a matter of life and Death&quot;” by rochelle hartman is licensed under CC BY 2.0

This article is based on the paper, ‘The importance of Medicaid expansion for criminal justice populations in the south’, in Health & Justice, co-authored with David H. Cloud of the Vera Institute of Justice Substance Use and Mental Health Program, New York City, Lauren Brinkley-Rubinstein of the University of North Carolina, Chapel Hill, Sarah Martino and Brad Brockmann of the Center for Prisoner Health and Human Rights, Providence, and Benjamin Bouvier of Brown University.

Nickolas D. Zaller – University of Arkansas for Medical Sciences
Dr. Zaller is an Associate Professor in the College of Public Health, Department of Health Behavior and Health.  He has more than a decade of experience working with criminal justice populations, both in Rhode Island and in Arkansas.  Additionally, Dr. Zaller has a strong background in conducting research among substance using and marginalized populations through numerous federally funded research studies and projects.  A particular focus of Dr. Zaller’s research is on the overlap between incarceration, behavioral health disorders and infectious diseases, including HIV.