Recent years have seen high profile cases of municipal government failure and state takeover in American cities like Detroit and Flint, Michigan. Ashley E. Nickels writes on why we should be concerned about threats to local autonomy such as these, which can supersede local home rule. She argues that such state actions – which can remove municipalities’ fiscal management – are often interventions when only assistance is needed, and that they can alienate local residents and community organizations.

Flint, Michigan, now synonymous with state government failure due to the Flint Water Crisis that unfolded during a municipal takeover, is a prime example of how strong state intervention can go wrong. Many US local governments have been unable to cope with the financial pressures of ongoing economic disinvestment, population shifts, and increased demand for services. Yet, Flint’s experience is not unique. Other cities like Detroit, Michigan, East St. Louis, Illinois, Chelsea, Massachusetts, and Camden, New Jersey, have also experienced similar fiscal distress that led to reduced local autonomy with intervention by the state, known as a “municipal takeover.”

Municipal takeovers occur when a state declares that a municipality is in fiscal crisis and places it in receivership, handing over most local processes to a state-appointed manager. My case studies in Michigan and New Jersey show that this policy of aggressive state intervention calls into question principles of local autonomy and home rule.

About two-fifths of states (19) in the US have some form of intervention law on the books; of these, 16 have general legislation in place to monitor and address local fiscal conditions. Yet, some states are more aggressive than others in how they intervene. Some simply monitor fiscal conditions, while others allow for stronger forms of state intervention. 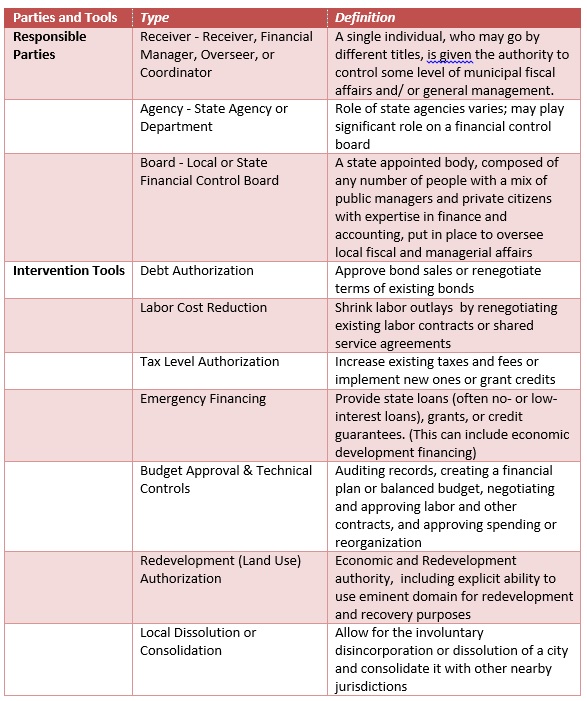 The most aggressive form of state intervention gives State officials the power to supplant local authority. Some states allow for a single individual—whether they are called a receiver, a Chief Operating Officer (New Jersey), or an Emergency Manager (Michigan)—these individuals have sole authority to “take charge” of not only the local government’s budget, but its operations.

State interventions, including municipal takeovers, also vary in terms of the tools available under the law. Though the tools available vary from state to state, the toolbox might include the removal of elected officials from office or the suspension of their decision making powers; the ability to restructure local government agencies, including eliminating citizen advisory boards; the ability to terminate employees and/or modify or nullify contracts; the authority to sell city assets and modify city services; and, the ability to levy taxes or fees.

It should be noted that municipal takeovers are a policy of last resort, used when both local government and the local economy are unstable and crisis-prone. As Wolman et al. (2007, 1) points out, “cities whose economies are stagnant, whose residents suffer from poverty and unemployment, whose budgets are in chronic fiscal stress, and who require state aid to sustain basic services are a drag on the entire state economy.” If this is the case, then why do we care? Why are we concerned about the potential threat to ‘local autonomy’?

Local autonomy should be understood in the context of power relations. It is a means of protection from outside, extra-urban threats, a particularly relevant issue when examining the practice of municipal takeover.

It is not hard to see how municipal takeover, strong state intervention that suspends and restructures local government, raises concerns regarding local autonomy; however, these same cities are eager to secure state financial support or subsidy. Local governments, especially distressed cities, are in a precarious situation: these municipalities need support and subsidies from their states, but accepting this aid limits their decision making autonomy. Municipal takeovers represent the clash between the need for intervention and the value of local decision making. The question then becomes, when is local autonomy trumped by state power? What are the legal frameworks that determine the level of local control?

Home rule is the “legal device” used by local governments to assert at least their partial autonomy from the state. According to one expert, in the US, “only national and state governments… enjoy [Federal] ‘constitutional legitimacy”. Given their subordinate status and lack of federal “constitutional legitimacy,” American municipalities’ existence and authority springs from their state constitution or state legislature. In the absence of a state provision for home rule, local governments are subject to state legislative control.

The price of municipal takeovers

Not only have home rule powers eroded, at best they only alter the form of a state’s intervention and do not serve as a bulwark against it.  While home rule is still heralded as a means to limit strong state intervention, I offer a picture of how it has not done so in both constitutional and legislative home rule states. As these two cases point out, home rule provisions are often eroded by state legislatures, courts, and even the electorate (particularly in the case of Michigan). Four key lessons or takeaways can be gleaned:

Not addressing the problems faced by fiscally distressed local governments would be “ethically, socially, and politically unacceptable”. However, the policy as it is currently designed creates unacceptable political and social outcomes as well. For example, the Michigan Emergency Manager is given authority over most of a city’s governance and the authority to terminate labor contracts, dissolve resident advisory boards, or dissolve local charters. With so much power concentrated in a single officer, it is no wonder that critics look to home rule doctrine for protection. In cases where imposed offices can dislocate residents for economic development purposes, like in New Jersey, it is easy to understand the desire for protection from intervention.

As post-industrial cities continue to face fiscal threats, states are increasingly getting involved in the direct governing of city institutions, affecting the community more broadly as recovery policies are applied, implemented, and institutionalized. Municipal takeovers are intended to be temporary and limited. When a locality recovers, power is intended to be restored to the city, yet many of the processes, procedures and organizational changes intended to address the structural deficits of the cities remain long after the takeover. The debate over municipal takeover should be broadened to examine its impact on not only the local economy, but also urban democracy and community control more broadly.

This article is based on the paper, ‘Approaches to Municipal Takeover: Home Rule Erosion and State Intervention in Michigan and New Jersey’, in State and Local Government Review.

Ashley E. Nickels – Kent State University
Ashley E. Nickels is an assistant professor of political science at Kent State University. She holds a PhD in public affairs, with a specialization in community development, from Rutgers University–Camden. Her primary field of study is public policy and administration, focusing on nonprofit and community-based organizations, urban politics, and local democracy and political participation. Her current research focuses on the impact of municipal takeover in Flint, Michigan.