In the US Congress, involvement in a corruption scandal is by no means the end to a legislator’s political career, with 60 percent of those implicated in such scandals going on to win reelection. So why do politicians get away with corruption? In new research which examines more than 130 Congressional corruption cases over 35 years, Marko Klasnja finds that part of the answer is voters’ lack of attention. Whereas voters with high levels of political awareness penalize corrupt politicians compared to clean ones, voters with lower levels of political awareness do not.

Over the past several decades, more than 60 percent of the members of Congress who have been implicated in a corruption scandal have been reelected. While this rate of success is lower than for incumbents unencumbered with corruption charges or allegations, a comfortable majority of members whose ethics have been seriously questioned retain their seats.

How can so many politicians get away with corruption in an established democracy like the United States? Perhaps it is because members of Congress enjoy substantial advantages over their challengers, due to name recognition or campaign financing advantage. But these incumbency advantages are in decline. Perhaps corrupt incumbents are helped by increasing ideological polarization: partisans may understand a corrupt politician is a scoundrel, but at least he or she is ‘our scoundrel.’ However, corruption scandals encourage serious primary challengers. Perhaps the courts or the media successfully remove the worst apples long before voters arrive at the ballot booth, while the remaining minor offenders eke out victories. But prosecutors and the press are frequently biased, and even a cursory look at corruption cases among rerunning politicians suggest many serious infractions. Take the case of Representative Charles C. Diggs Jr. He was convicted to three years in prison on Oct. 7, 1978 for illegally diverting more than $60,000 – around $410,000 in present value – of his congressional employees’ salaries to his personal use. Yet, he remained on the ballot and exactly 30 days after his conviction won re-election to the US House of Representatives with 79 percent of the vote.

Instead, I examined the role of voters’ ignorance of their representatives’ corruption. American voters are (in)famously uninformed about politics. What I found is that voters’ inattentiveness to politics is strongly associated with lower propensity to vote against a corrupt incumbent.

In line with a long tradition in political science, I measured voters’ ‘political awareness’ based on a rich set of survey questions about basic knowledge of politics in the biannual American National Election Studies. These surveys consistently probed respondents’ factual knowledge of politics and institutions (for example, which party holds the majority in the House), their ability to identify important political figures (for example, to name the Vice President), and to properly place parties and prominent candidates relative to each other on a range of policy issues, such as health care, taxes, abortion, and environment.

I combined these data with detailed information on more than 130 corruption cases among House and Senate members over three-and-half decades. The cases vary in scope and seriousness, from ‘in-house’ transgressions, such as Representative Irving Whalley expropriating salaries of 17 staff members for his own use, to criminal enterprises like the Koreagate case involving ten members of the House peddling influence for bribes from a Korean businessman. But what all these cases have in common is that they were widely publicized, and the vast majority was investigated by the IRS, the FBI, and the like. In other words, these corruption cases were not obscure or hidden from the public eye – unless voters were unaware of them.

These are non-trivial differences. Corrupt politicians in my sample lost on average 5 percent in vote share following a scandal, but still won reelection with around 60 percent of the vote. However, if we could somehow increase every Congressional district’s average political awareness – but leave politics otherwise unchanged – to the level of the most attentive district (Virginia’s 8th district, encompassing much of the Washington DC metro area), the average electoral penalty would double in size – enough to cost the large majority of corrupt politicians their reelection.

However, even this miraculous across-the-board increase in voters’ political awareness would have limits. The most attentive voters in the US are also the most partisan. That is, those who know and understand the most about a politician’s transgression are also those who care the most about that politician’s policy positions. I found that well-informed supporters of a corrupt politician’s party are no more inclined to punish corruption than uninformed partisans – the highly aware co-partisans were most inclined to trade-off corruption for preferred policies. Nevertheless, the positive effect of greater political awareness among independents and supporters of the opposite party outweighs this trade-off effect among co-partisans, thus producing a net-benefit of increasing political attentiveness among voters.

Others have argued that voter disinterest is detrimental to the quality of democracy, and urged for stronger emphasis on civic education and social engagement. My results suggest one concrete avenue where greater political attentiveness may produce clear benefits – greater sanctioning of politicians who misuse public office for personal or political gain.

This article is based on the paper, ’Uninformed Voters and Corrupt Politicians’, in American Politics Research. 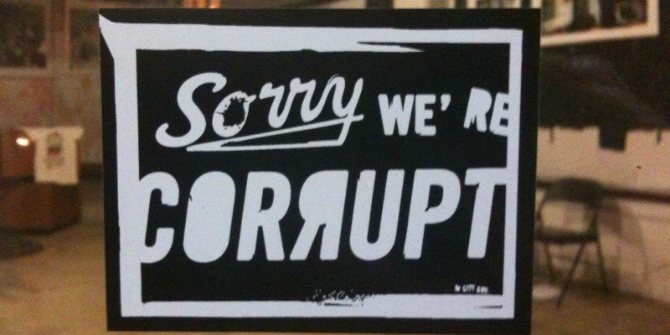