Many schools in socio-economically disadvantaged communities struggle to provide their students with healthy food environments. In a study analyzing almost 500 children in 246 schools the Canadian province of Quebec, Caroline Fitzpatrick finds that that 10-12 year olds attending the least healthy schools had comparatively higher central body fat than those attending healthier schools, where students had easy access to quality food. The author argues that preventative strategies towards obesity and chronic metabolic disease is best to counter this effect.

Childhood obesity remains an important challenge for researchers, healthcare practitioners, and stakeholders interested in the improvement of population health. Scientists are increasingly recognizing that childhood obesity is the result of multiple interacting biological, psychological and social-environmental factors. While biological and psychological influences are important, researchers have become increasingly interested in the role of social-environmental factors because they tend to offer appealing targets for interventions. Food environments, which represent the proximity and quality of food to which individuals have easy access, have been studied as such targets. In particular, the influence of school food environments on child health is of increasing interest since the vast majority of children spend much of their day in school.

Many nations have created and implemented policies to regulate the quality of foods that are offered and sold within elementary and high schools. Despite these efforts which aim to ensure that all children are exposed to healthy environments, our research has recently suggested that considerable inequality exists in the school food environments that are available to school-aged youth. In a study of 246 schools located in urban areas of the Canadian province of Quebec, we identified three distinct school types: those with unhealthy food environments within the school; those with unhealthy food environments within and surrounding the school; and those with overall healthy food environments. The quality of the food environment within schools was evaluated based on interviews with the school principals who answered questions about the cafeteria menu and the sale of food on school premises. The surrounding food environment was assessed using the geographical concentration of convenience stores and fast food outlets within walking distance. In addition to identifying three distinct school types that differed in their healthfulness, our analyses also indicated that unhealthy schools were more likely to be located in neighbourhoods with higher level of socioeconomic disadvantage.

Does the school children attend influence their health?

To answer this question, we analyzed information from 431 children attending the 246 schools described above. This sample was followed as part of the Quebec Adipose and Lifestyle and Investigation in Youth (QUALITY), a larger study designed to study the evolution of obesity in children facing genetic risk for metabolic health problems. We found that 10-12 year olds attending the least healthy schools (those with unhealthy food environments within the school, and those with overall unhealthy food environments), had comparatively higher central body fat than those attending healthier schools when measured two years later. Central body fat, which consists of fatty tissue that is accumulated around the waist and abdomen, is generally considered to pose a greater threat to long-term health than fat accumulated in other part of the body. Central body fat was measured using x-ray technology which allowed us to precisely measure lean body and fat mass. Finally, these results were not confounded by family socioeconomic status, or parental weight status. 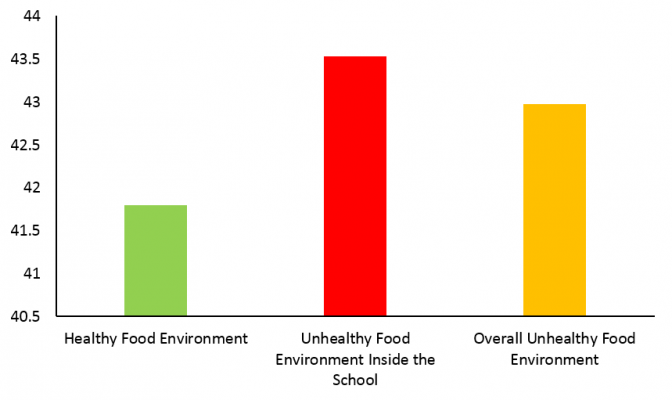 We recognize several limitations in our study. For one, our assessment of the school food environment inside schools was based on interviews conducted with the school principals. Consequently, it is possible that these reports were tinted by the principals’ inability to recall certain details or biased by social desirability motives. Another limitation of our results is its correlational design. As such, it is not possible to rule out the possibility that some features of youths’ home environments might have influenced the type of school they found themselves in and their fitness. To limit this possibility, we statistically controlled for parent education level and income, two strong indicators of socioeconomic status and health. Finally, our sample was limited to Caucasian youth at risk of developing cardiometabolic disease. To better assess the generalizability of our findings, replications with lower-risk youth and ethnically diverse populations are needed.

There is some convincing evidence that judiciously implemented interventions that target food environments inside schools can improve the quality of children’s diets. Our results suggest that the food environment surrounding the school should also be included in such interventions. Our analyses also suggest that schools in disadvantaged communities may struggle the most to offer high quality food environments. For example, more disadvantaged schools may depend on sales revenue from certain food items or staff may not receive the training necessary to promote healthy eating habits. This in turn may further exacerbate socio-economically-based disparities in health. Future research should aim to identify strategies for overcoming the social and economic barriers that stand in the way of the successful implementation of healthful food policies in disadvantaged schools.

The most successful strategies for countering obesity and chronic metabolic disease are those that are preventive in nature. These preventive efforts should devote resources to creating environments that promote child physical activity and healthful eating habits. We further recommend that increased efforts be devoted to creating healthier food environments in elementary schools where children spend much of their time, consume a large portion of their daily caloric intake, and form the basis of their lifelong eating habits and preferences.

This article is based on the paper: ‘School food environments associated with adiposity in children attending Canadian urban schools’ in International Journal of Obesity.

“Teen and childhood obesity” by Gaulsstin is licensed under CC BY 2.0.

Caroline Fitzpatrick – Université Sainte-Anne, Canada
Caroline Fitzpatrick, is an assistant professor at Sainte-Anne’s University of Nova Scotia where she teaches psychology and statistics. She is also an affiliate researcher at Concordia University’s PERFORM Center and an appointed research fellow at the University of Johannesburg, in the department of childhood education. Her work addresses the childhood origins of education and health inequities and has the ultimate goal of informing social policies and public health initiatives aimed at improving child physical and mental health internationally.