Deconstructing the myths behind Medicare and Medicaid

Deconstructing the myths behind Medicare and Medicaid

Medicare, health insurance for the elderly, a universal program for which all Americans become eligible when they reach retirement age; and Medicaid, health insurance for the poor are two often conflated and misused concepts. George Klosko deconstructs Medicare and Medicaid’s different histories and structures and misconceptions about the contributory nature of each.

As Congress struggles to repeal and replace the Affordable Care Act, less attention is paid to efforts in several states to impose work requirements on Medicaid recipients.  These efforts mirror earlier attempts require work on the part of  recipients of welfare (AFDC, Aid to Families with Dependent Children), which were eventually enacted in 1996 in the presidency of Bill Clinton.  Decades of survey research have shown that Americans hold unusually negative attitudes towards “welfare,” generally viewing welfare recipients as slackers, who could find jobs if they really wanted to.  Attempts to require welfare recipients to work draw on this reservoir of negative feeling, and more broadly on the notion of the “undeserving poor,” which can be traced back at least to the time of Justinian.

But perpetuation of these attitudes requires overlooking ways the not-poor are also supported by welfare programs.  This is seen perhaps most clearly in differences between Medicare and Medicaid, in both how they are structured and are commonly understood. The US is unusual (perhaps unique) among wealthy democratic countries in having a two-tier public health insurance system. Both Medicare and Medicaid were enacted in the Medicare Act of 1965.  Medicare is health insurance for the elderly, a universal program for which all Americans become eligible when they reach retirement age.  Medicaid is health insurance for the poor.  It is means-tested, and while Medicare is administered by the federal government and so has uniform structure throughout the country, Medicaid is administered by the separate states, with resulting requirements and benefit levels varying significantly between states.

After Harry Truman failed to pass a universal health insurance scheme during his presidency, Medicare became a central goal of the Democratic party.  In response to Truman’s failure, proponents of universal health insurance devised a piecemeal strategy, beginning with care for the elderly.  With medical costs ever rising, employer-provided health insurance offered little to the retired elderly, while few could pay medical expenses on their own.  For maximum political viability, Medicare was structured as part of the Social Security system. Social Security insurance is essentially a pension plan.  A percentage of workers’ salaries is deducted throughout their working lives and deposited in a trust fund. When a worker retires, benefits depend on past contributions. Although there are departures from this principle–e.g., pensions for widows and orphans, even if they did not themselves contribute–what one receives is roughly proportional to what one has contributed.  Political historian Julian Zelizer notes the symbolic function the connection between Social Security contributions and benefits plays in public consciousness, contributing to a welfare program that “could withstand the anti-statist culture of the United States.”  This feature of the program has allowed policy makers to maintain the distinction between Social Security benefits and “welfare” and to argue that the former does not create dependency on government.

Medicare was structured similarly.  As with Social Security, workers have a portion of their salaries deducted and placed in a separate trust fund, to be paid out as medical expenses require.  Political considerations dictated this strategy. According to Wilbur Cohen, one of the program’s architects: “[T]he reason we latched Medicare [onto] … Social Security is because we knew people were very favorable to Social Security”; being tied to social security “separates it entirely from … [an] assistance or a welfare approach.” An advantage of basing benefits on contributions is that they “give American workers the feeling they have earned their benefits.”

Medicaid was structured differently. Not only was it turned over to the states for implementation, but it was required to cover all public assistance categories: the indigent elderly, the blind, AFDC recipients, and the disabled. Its administrative structure was also built on welfare. As Jonathan Engel says: “[Medicaid] management would be housed within existing state welfare department, meaning that most government officials and legislators would view the program primarily as welfare.”

Although Medicare was from its inception distinguished from welfare, this distinction was largely false.  When Medicare was established, some five and one half million Americans over 65 would not have been eligible. As administrators debated, Cohen was opposed to extending coverage to non-contributors, because this would undermine the public’s belief it was an insurance scheme: “Treating contributors and non-contributors alike might raise questions about the whole contributory basis of the system.” Cohen lost this particular argument, as it was decided that non-contributors would be “blanketed in,” regardless of effects on the insurance principle.  In addition, while Part A of Medicare–hospital costs–is financed through contributions, a strict contributory rationale does not hold in regard to Part B.  Physicians’ services and other expenses covered under this portion of Medicare are financed through a general revenues along with beneficiary contributions.  Most important, Medicare departs from the contractual nature of Social Security at its core.  Unlike Social Security, in which beneficiaries receive payments in relation to their contributions, Medicare’s beneficiaries receive medical care, the nature of which depends on medical considerations rather than what they have contributed. To some extent, this makes Medicare “a redistributive policy that ensures low-income workers the same access to government-sponsored health insurance as affluent employees.” But  affluent employees have little reason to complain.  Even though they pay higher payroll taxes, because of the growth in medical expenses, the cost of care beneficiaries receive is typically 3 or 4 times what they contribute. These considerations gives the lie to contributory social insurance.  Like recipients of welfare or charity, Medicare beneficiaries receive the bulk of their benefits through the largesse of other people. One could therefore argue that contributory financing makes little sense, as did the 1975 Social Security Advisory Council. Because benefits are not determined by contributions, but by health care expenses the council argued: “there does not seem to be any real reason for funding  [Medicare] costs by a tax on wages.” 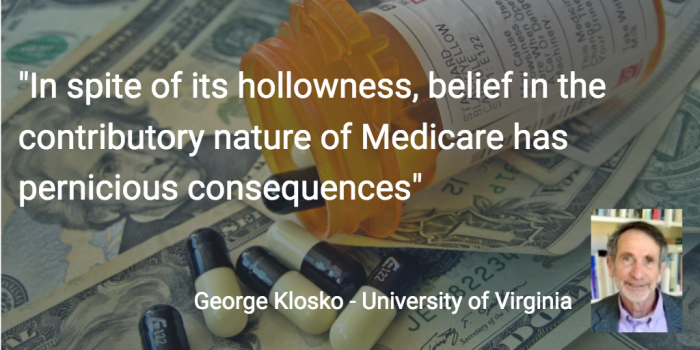 In spite of its hollowness, belief in the contributory nature of Medicare has pernicious consequences. To begin with, this makes the program difficult to reform.  To the extent that program participants  believe their benefits have been earned through contributions, they have good reasons to resist reform as violating their property rights. An argument along these lines was made by Congressman John W. Byrnes, the Congressman mainly responsible for the development of what became Medicare Part B, during debate over Medicare:

“Under the payroll tax, an erroneous concept has been sold to the people that they have paid for their benefits, that they have bought something as a matter of right, under such a concept there is no flexibility to make changes because the people tell you, “We have bought this, and you cannot make any change except to liberalize it.”

Taken to its logical conclusion, this attitude shows up in the apparently sincere although delusional demand that “Government keep its hands off my Medicare.”

Increased stigmatization of Medicaid is an additional undesirable consequence.  The English Poor Law reforms of 1834 enshrined the principle of “least eligibility” (meaning: least desirability). Benefits would be provided to the very poor, but conditions would be so harsh that only those who had no other options would accept them.  Recent attempts to attach work requirements to Medicaid reflect similar attitudes, which in no small measure are fostered by contrast with Medicare. According to Paul Starr, the 1965 Medicare Act not only institutionalized a two-tier public health insurance program in the US but helped to justify this structure: “Medicare invites the elderly to believe that they have earned its benefits, whereas other claimants have not.”

“Healthcare Costs” by Images Money is licensed under CC BY 2.0

George Klosko – University of Virginia
George Klosko is Henry L. and Grace Doherty Professor of Politics at the University of Virginia. His research interests include contemporary political theory, especially issues in analytical and normative theory, and the history of political thought. He teaches courses in both areas: in the history of political thought, focusing on the liberal tradition and Greek political theory, especially Plato; in contemporary, in specific aspects of liberal theory, including problems of political obligation and the theory of John Rawls and Rawls’s critics. His books include: The Development of Plato’s Political Theory (Methuen, 1986; Second Edition, Oxford, 2006); The Principle of Fairness and Political Obligation (Rowman and Littlefield, 1992); Political Obligations (Oxford University Press, 2005), and The Oxford Handbook of the History of Political Philosophy (Oxford, 2011), which he edited.