Nicholas Chagnon, Meda Chesney-Lind, and David T. Johnson argue that Hawaii, one of the most diverse states in the country, lacks the racial tensions characterizing many cities in continental United States, and thus concerns over gender violence provide an alternative discourse for catalyzing police reform. Video recordings of incidents of police violence, they argue, have worked to elicit public outrage and push for change in the state.

On September 3, 2014 at a restaurant in Waipahu, Honolulu Police Sergeant Darren Cachola repeatedly punched his girlfriend while chasing her. This was done in full view of others on site, but police who responded did not arrest Cachola –they did not even file a report. This incident might have gone unnoticed had it not been caught on video by the restaurant’s security camera. The video, which circulated widely online, has thousands of views on YouTube and was broadcast by local and national news outlets, sparked widespread outrage, and catalyzed a push for police reform in Hawaii.

Police reform has been a prominent issue in the US since the Black Lives Matter Movement emerged in response to the killings of unarmed black men such as Trayvon Martin, Michael Brown, and Eric Garner. A similar movement has grown in Hawaii over the same period of time, yet Hawaii is also unique in that it lacks the black-white tensions that affects crime and justice politics on the continent. Thus, Hawaii’s police reform movement shares similarities yet also differs fundamentally from the movement elsewhere in the U.S. Ultimately, events in Hawaii suggest two important lessons: the importance of video evidence in facilitating police reform, and the potential for gender issues to ignite concerns over police violence.

An understanding of Hawaii’s social climate is key in order to understand the movement for police reform in the state. Hawaii, like many other American states, has a political climate that is not conducive to reform.  Several factors contribute to this climate.  The Democratic Party dominates state politics (45 out of 51 state representatives (88.2%) and all state senators are Democrats), creating an insular political environment in which politicians are rarely held to account. Police groups also have considerable political power.  The state police union, SHOPO, has a close relationship with legislators and other prominent politicians.  Their clout was clearly on display in 1995 when they successfully campaigned for a special exemption to transparency laws, which kept the names of disciplined police officers secret.  The Honolulu Police Commission, tasked with citizen oversight of the police, has traditionally been staffed by political insiders and patrons, such as a high-ranking employee of the largest construction union in the state.  Hawaii’s media market largely consists of one newspaper, the Star-Advertiser, and a handful of corporate TV outlets, which (until recently) have shown little interest in investigative reporting of issues such as police misconduct. Since 2010, Honolulu Civil Beat, an online news site, has provided some competition and stimulated more reporting on police misconduct. However, Hawaii’s media environment, on the whole, lacks meaningful investigative reporting.

Hawaii, and its largest city, Honolulu, also have a different racial climate than other large US cities and states. It is one of the most diverse states in the country, which is reflected in the makeup of the Hawaiian Police Department (HPD). More than one-third of police officers are Asian and 27 percent are Native Hawaiian. Unlike other American cities’ police forces, Honolulu’s is not a largely white department policing poor African-American communities, resulting in less interest in dialogue on racialized policing.

A movement for reform

Robust media coverage of video-recorded incidents of police brutality sparked a push for police reform in Hawaii. In addition to the Cachola case, two other cases attracted caught public attention as well. Around the same time as the Cachola case unfolded, Sergeant Vincent Morre was caught on surveillance camera kicking and beating a suspect with a chair. Morre was eventually sentenced to federal prison, and two other HPD officers were dismissed for their actions. In December 2015, another video of HPD misconduct emerged when a bystander on the beach caught officer Min Wang pepper spraying and beating a mentally ill homeless man after the man approached a Hawaiian Monk Seal, harassment of which is illegal under Hawaii law. 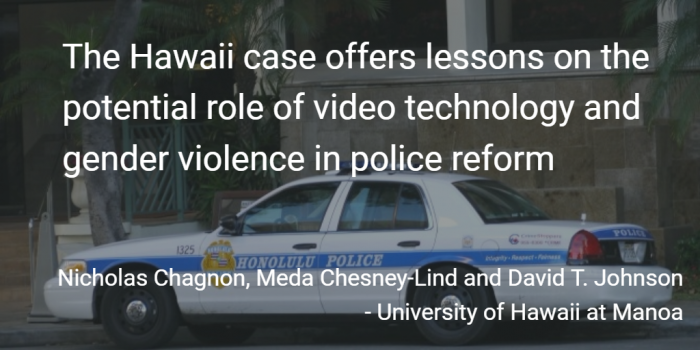 All three videos received coverage in the local media, and they goaded officials into acting on police misconduct.  The Hawaii Women’s Legislative Caucus called a well publicized public hearing at the capitol in September 2015 regarding police, domestic violence, and misconduct. In 2016, two more cases involving gender violence (but not caught on video) heightened public and political concern.  News outlets reported that Ethan Ferguson, who was dismissed from the HPD for an apparent sexual assault, was rehired as a police officer by the Hawaii Department of Land and Natural Resources. Honolulu Police Chief Louis Kealoha attempted to promote Major Ryan Borges to assistant chief, even though Borges had a well-documented history of domestic violence. The ensuing criticism forced Kealoha to undo the promotion, and may have contributed to a push for Kealoha’s resignation (which happened recently under pressure from a now more substantial and empowered Police Commission).

Women legislators spoke frequently about these cases. For example, a press release from the Women’s Legislative Caucus read, “This incident sends a dark message to victims of domestic violence and all residents of Oahu, that members of HPD, who are supposed to serve and protect, may turn a blind eye to domestic violence or other criminal acts committed by of one of their officers.” They also took action during the following legislative sessions (2015-2017), by introducing dozens of police reform bills.  Those signed into law include a measure requiring police agencies to publicly post their domestic violence procedures, and another setting up an independent board to review police shootings.

The Hawaii case offers lessons on the potential role of video technology and gender violence in police reform.  The Cachola, Morre, and Wang cases illustrate how video evidence can break through the ‘blue wall of silence,’ which protects police misconduct in many places.  Video is also a compelling form of evidence which documents misconduct that otherwise would be deniable.  The Internet and other communication technologies make it possible to circulate such videos widely and rapidly without having to pass through traditional journalistic gatekeepers.

The consequences of this are numerous.  Citizens sharing videos may mobilize complacent media, particularly since they provide these outlets with powerful images and stories and for very little cost. The omnipresent threat of being recorded can deter police misconduct and seeing the reality of police brutality on video helps dispel myths long accepted by the public and propagated by police, including the claim that police routinely face great danger in their encounters with ordinary citizens.

Events in Hawaii also suggest that in climates lacking the racial tensions characterizing many US cities, concerns over gender violence may provide an alternative discourse for catalyzing police reform.  Shootings of unarmed black men and women across the US incited the Black Lives Matter movement and a vigorous debate about police reform. In Hawaii, acts of gender violence by police elicited similar outrage and a parallel push for reform.  It is also clear that gender and race are both salient factors in discussions on police reform.  As the founders of the Say Her Name campaign have argued, movements that integrate concerns over racism and gender violence offer wider appeal and greater promise for effective police reform.  Indeed, the integration of gender into the current critique made by Black Lives Matter might help bridge some of the social divides that have obstructed the movement.

Meaningful reform is a possibility, not a certainty. The story of police reform is still unfinished in Hawaii, as it is on the continental US. Several modest police reform measures have been enacted, and a city charter amendment strengthening the Honolulu Police Commission recently passed by a wide margin.  That said, as the 2017 legislative session ends, most police reform bills – including the most ambitious ones – have died in committee.  It remains to be seen whether real police reform will be realized in Hawaii.

“Honolulu Police Dept.” by Magnus Bråth is licensed under CC BY 2.0

Nicholas Chagnon – University of Hawaii at Manoa
Nicholas Chagnon recently earned his PhD in Sociology at the University of Hawaii at Manoa where he teaches courses in sociology and criminology.  His research interests include feminist criminology, gender violence, and media and crime.  He has published in journals such as Critical Criminology, Crime Media Culture, and Feminist Criminology.

Meda Chesney-Lind – University of Hawaii at Manoa
Meda Chesney-Lind, PhD, teaches Women’s Studies at the University of Hawaii at Manoa. Nationally recognized for her work on women and crime, her testimony before Congress resulted in national support of gender responsive programming for girls in the juvenile justice system. Her recent books include two edited collections; one on trends in girls’ violence, entitled Fighting for Girls: Critical Perspectives on Gender and Violence (2010) and the other a collection of international essays entitled Feminist Theories of Crime (2011).