Rational choice theories of voter behavior suggest that factors such as bad weather and a busy schedule should discourage voting in noncompetitive elections. Considering voter turnout in New York City in 2012 – in the immediate aftermath of Hurricane Sandy – Viviana Rivera-Burgos, Narayani Lasala-Blanco and Robert Y. Shapiro find that personal motivation to vote can override minor and even major costs of voting, even in noncompetitive elections.

Making landfall in the Northeastern United States on October 29, 2012, Hurricane Sandy caused widespread flooding and severe damage in many parts of New York, New Jersey, and Connecticut. In New York City alone, Sandy wreaked havoc in five coastal areas, home to 685,000 city residents. The Federal Emergency Management Agency (FEMA) reported that the storm surge left floodwater marks in the buildings and houses in these neighborhoods that reached over nine feet. Since the general election was scheduled to take place merely a week after the hurricane hit on November 6, 2012, there was much speculation about how the disruption caused by Sandy would affect voter turnout, and the election results themselves, especially in these hard-hit coastal areas.

We therefore asked: To what extent does the disruption to public transportation, power outages, and last-minute changes to polling sites caused by weather related phenomena affect voter turnout? Were individuals who faced the greatest costs of voting (i.e., those whose lives were the most severely disrupted by Sandy) the least likely to turn out on Election Day in 2012? 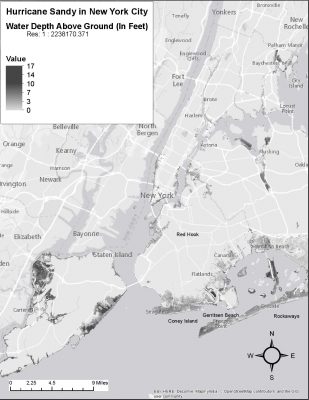 On Election Day in 2012, NYC voters in some areas were still dealing with flooded or destroyed homes, power outages, a lack of heat, and severe transportation disruptions. Since flooding along the coast destroyed polling places, many voters were often redirected to improvised ones. In the aftermath of Sandy this presented a challenge because public transportation in these areas had not been restored and most vehicles were severely damaged during the storm; thus, voters often had to walk over a mile to cast their votes. While voters living in tall housing did not experience flooding, power outages had grounded elevators, which meant voters had to climb anywhere from 4 to 20 flights of stairs to get to the polls—a particularly challenging situation for senior citizens who were concentrated in large public housing buildings.

In our article, which we summarize very briefly here, we used individual-level survey data collected immediately following the hurricane and the 2012 election in New York City to examine the theoretical underpinnings of the weather-turnout hypothesis—the idea that bad weather usually results in decreased voter turnout. Rational choice theorists hold that there are costs and benefits associated with political participation. Scholars have argued that even small costs, such as schedule conflicts or bad weather, should dissuade anyone from voting—especially when the benefits of doing so are negligible. New York City in the 2012 Presidential race was an ideal context to examine the claim that individual voters may be dissuaded to vote when they experience out-of-the-ordinary weather related disruptions because, while the competition of the electoral race remained constant for individuals in this geographic area (there were no lower level competitive races), the damage inflicted by Sandy to individual homes and neighborhoods varied considerably.

In short, for New Yorkers residing in these hard-hit areas, voting on November 6, 2012 required an inordinate amount of effort. Given these costs and the noncompetitive nature of the electoral race, rational choice reasoning would strongly suggest that individuals who were living in the Sandy-affected areas should be significantly less likely to vote than city residents in places where there was hardly any flooding, and where everything from transportation to heat and electricity had been restored by Election Day.

Previous research has found a negative correlation between bad weather and turnout in the aggregate over time. With aggregate data, however, it is not possible to investigate whether those individuals who face greater costs are indeed the least likely to turn out. Our article contributes to the understanding of the micro foundations of the weather-turnout hypothesis by using individual-level data in an electoral context where the potential benefits of voting were small for all but the costs were high for a good portion of these individuals. It also highlights the importance of the institutional context as a key factor mediating the perceptions of costs and benefits of voting for individual voters.

Contrary to the rational choice theories that assign a prominent role to the costs associated with voting to explain lower levels of turnout in the aggregate (including the weather-turnout hypothesis), we found that the greater challenges to get to the polls caused by Hurricane Sandy and its aftermath made little difference in the individual decision to vote on November 6, 2012 in New York City. We then explored whether individual turnout was not affected in the hard-hit areas because those living in them were motivated to vote, as previous studies have suggested, for reasons related to the handling of the disaster: their desire to punish or reward the incumbent president. We found no support for this alternative hypothesis.

Table 1. Vote in the 2012 elections and Hurricane Sandy flood water

Why was this the case?  We argue that, under certain circumstances, personal motivation to vote can override minor and even major costs of voting, even in noncompetitive elections, especially in local institutional contexts where political parties have consistently socialized and mobilized economically disadvantaged groups and minorities. When citizens perceive an election as either being an historic one (i.e., one that can alter major political and other arrangements in the country), or one that can have long-lasting effects on the immediate community of the voter, they are willing to endure costs such as low temperatures, long lines, and even traveling to distant polling places. This is true especially among economically disadvantaged and non-white communities that have been politically socialized in their areas by active political parties that have impressed upon them the importance of civic participation.

This article is based on the paper “Turnout and weather disruptions: Survey evidence from the 2012 presidential elections in the aftermath of Hurricane Sandy” in Electoral Studies.

“Newspaper hat in the rain” by Olivier Colas is licensed by CC BY-SA 4.0.

Viviana Rivera-Burgos – Columbia University
Viviana Rivera-Burgos is a Ph.D. Candidate in Political Science at Columbia University, where she specializes in American politics. Her dissertation focuses on minority politics, namely, the formation of white Americans’ preferences over race-targeted social policies, and the relationship between those preferences and public policy. She is also studying “co-minority” bias, a term that refers to the responsiveness of minority legislators to constituents of other minority groups. Her research has been funded by the Center on African American Politics and Society. Before attending Columbia, Viviana was valedictorian of the 2014 graduating class of the University of Puerto Rico at Mayagüez, where she majored in political science and history. In 2013, she was a research fellow at the GSAS-Leadership Alliance Research Program at Columbia University. She has also worked for the U.S. Fish and Wildlife Service and for the Earth Institute, conducting surveys about the impact of climate change on agricultural practices among farmers in Puerto Rico and Jamaica, respectively.

Narayani Lasala-Blanco – University of California-Santa Barbara
Narayani Lasala-Blanco is an assistant professor in the Department of Political Science at University of California-Santa Barbara. She specializes in the areas of immigrant political integration, Latino and minority politics in the United States, public opinion and political behavior and mixed methods data collection. Lasala-Blanco’s primary research interest is the formation and change of political identities and opinions among immigrant and minority communities and the influence the local context has in shaping this process. Her current work examines the impact of local institutions and political events on the development of civic skills among first and higher generation Latino immigrants in the United States. Prior to joining the faculty at UCSB, Lasala-Blanco was a Research Associate at Harvard University’s Opinion Research Program and the Survey Director of the Robin Hood Foundation-Columbia Population Research Center’s Poverty Tracker (a multi-year survey study of poverty in New York City).

Robert Y. Shapiro – Columbia University
Robert Y. Shapiro is the Wallace S. Sayre Professor of Government in the Department of Political Science and Professor of International and Public Affairs at Columbia University. He is a Fellow of the American Association for the Advancement of Science, received a Distinguished Columbia Faculty Award in 2012, and in 2010 the Outstanding Achievement Award of the New York Chapter of the American Association for Public Opinion Research (NYAAPOR).  He specializes in American politics with research and teaching interests in public opinion, policymaking, political leadership, the mass media, and applications of statistical methods. His current research examines partisan polarization and ideological politics in the United States, as well as other topics concerned with public opinion, the media, political leadership, and policymaking.