In our recent study, we examine immigration into the United States during America’s Age of Mass Migration (from 1850–1920) and estimate the causal effect of immigrants on economic and social outcomes approximately 100 years later. Not only was this the period in U.S. history with the highest levels of immigration, but the immigrants that arrived during this time were different from previous waves of immigrants. While earlier immigrants were primarily from Western Europe, subsequent waves also included large numbers of immigrants from Southern, Northern, and Eastern Europe who spoke different languages and had different religious practices.

The main challenge with the analysis is that immigrants had specific reasons to settle in different communities, and these reasons may be associated with the long-run economic and social outcomes of interest. Immigrants may have aimed to settle in areas with the highest growth potential. In this case, we might observe that these areas are growing faster today, but this is not necessarily driven by historical immigration. Alternatively, immigrants may have only managed to settle in areas with poorer growth potential, where land was cheaper and more abundant. The fact that these areas today are growing slower may not be the direct cause of the presence of the immigrants. In both cases, estimates of the effect of immigration could be biased by the inherent characteristics of the places immigrants settled into, which may be important for long-term economic growth, regardless of the extent of immigration.

Our analysis attempts to overcome these issues by exploiting two facts about immigration during this period. The first is that after arriving into the United States, immigrants tended to use the newly constructed railway network to travel inland to their eventual place of residence. Therefore, at any point in time, a county’s connection to the railway affected the number of immigrants that settled in the county. The second fact is that the total inflow of immigrants fluctuated greatly during this period, with the flow of immigrants varying significantly from year-to-year and even decade-to-decade (see Figure 1). In some decades immigration was significantly higher than average (e.g., 1850s, 1880s, and 1900s) and in other decades significantly lower than average (e.g., 1860s, 1870s, and 1890s).

Figure 1. Total number of immigrants arriving in the United States 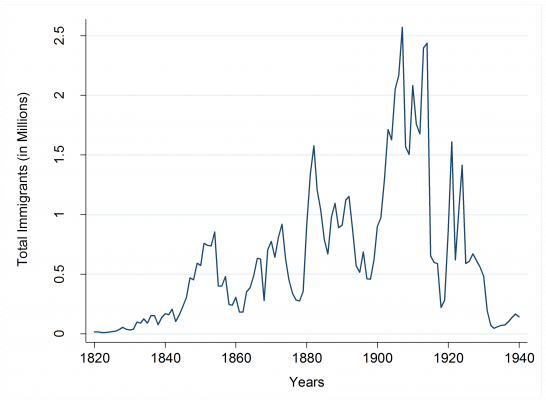 Our estimates suggest that immigration, measured as the average share of migrants in the population between 1860 and 1920, generated significant economic benefits today.  We find that it resulted in significantly higher incomes, less poverty, less unemployment, more urbanization, and higher educational attainment today. In fact, moving a county with no historical immigration during the age of mass migration to the 50th percentile of the sample (which is a county with a 5% share of immigrants) results in a 20% increase in average per capita income today.

We also find that immigration resulted in an immediate increase in industrialization. Immigrants contributed to the early establishment of more manufacturing facilities and to the development of larger facilities. They also contributed to agricultural productivity in the medium-run and helped create an environment that promoted innovation as measured by patenting rates of both immigrants and native-born. Immigrants also provided an ample supply of unskilled labor, which were crucial for early industrialization. A smaller share of immigrants also brought with them knowledge, experience, and skills that were beneficial for industry and increased productivity in agriculture. Despite evidence of some short-term costs to immigration, as indicated by the rise of nativism and other anti-immigrant movements in the 19th and 20th century, we find no evidence of adverse long-term social effects from immigration. Communities with more historical immigration are not any more likely to have higher crime or lower civic engagement today. While the inflow of immigrants did reduce average educational attainment in the short-run, this effect was reversed in the medium-run as economic wealth created by the immigrants translated into higher educational investment for their children (and for the children of native born Americans in the same locations).

All in all, our findings suggest that the long-run benefits of immigration can be sizeable and that these effects do not appear to come at a social cost.

Extrapolating from these historical results to the current debate on migration requires, however, caution. The Age of Mass Migration occurred during a period of industrial take-off, which was characterized by high demand for labor and vast areas of land available both in the West and in the Midwest. These differences notwithstanding, it is important to also consider some striking similarities. During both migration periods, the pool of immigrants was ethnically diverse and varying in skill level. The short-term social costs and tensions of increased immigration were politically salient in both periods.

“Immigrants Make America Great” by Paul Sableman is licensed under CC BY 2.0.

This article is based on the paper Migrants and the Making of America: The Short- and Long-Run Effects of Immigration during the Age of Mass Migration.

Note: This article gives the views of the authors, and not the position of USAPP – American Politics and Policy, nor of the London School of Economics.

Sandra Sequeira – London School of Economics
Sandra Sequeira (PhD Harvard, 2009) is an Assistant Professor at the London School of Economics. She is a Research Affiliate with CEPR, a Research Associate with STICERD (EOPP) and Lead Academic for the International Growth Centre (Mozambique). Her research interests include development economics, applied microeconomics and labour economics.

Nathan Nunn – Harvard University
Nathan Nunn is Frederic E. Abbe Professor of Economics at Harvard University. Professor Nunn was born in Canada, where he received his PhD from the University of Toronto in 2005. Professor Nunn’s primary research interests are in economic history, economic development, cultural economics, political economy and international trade. He is an NBER Faculty Research Fellow, a Research Fellow at BREAD, and a Faculty Associate at Harvard’s Weatherhead Center for International Affairs (WCFIA). He is currently a co-editor of the Journal of Development Economics.