What feminism, intersectionality, and place in political resistance can tell us about the American South

What feminism, intersectionality, and place in political resistance can tell us about the American South

The political activism of southern women stands out in recent protests and women’s marches in the U.S. Although long stereotyped as passive adherents to Old South patriarchal norms, women historically have found ways to resist. Today, public resistance to racism, misogyny, and LGBTQ discrimination in the South, as well as the spread of confederate flags and other symbols of white supremacy throughout the U.S., challenges old understandings and biases about region.  Research by Wanda Rushing shows us how research on place and intersectionality makes social actors more visible and demystifies analysis of political resistance.

Misogynistic and racist tweets about the march have not been limited to North Carolina, or to the South. But there is something Southern about these particular insults involving fat shaming and references to pig products, particularly as they relate to historical cultural patterns of ridiculing women as a means of maintaining social control.  Organized, direct resistance and defiance of public derogatory comments may seem unusual for Southern women, long stereotyped as passive adherents to Old South traditions of race and gender norms and muzzled by good manners in a region considered a bastion of conservatism. Perhaps less visible than their northern counterparts, southern women have been known to engage in more subtle acts of everyday resistance.  But recent participation in women’s marches and responses to criticism suggest that a direct confrontational style, or a taking-off-the-gloves approach, may be replacing less direct forms of resistance observed in previous struggles.

Each generation of feminism produces new questions, responses, debates, and critiques. A generation ago, Kimberlé Crenshaw introduced the term intersectionality critiquing the failure of feminism to account for lived experience at neglected points of intersection – those that tended to reflect multiple subordinate social positions. Intersectionality critiqued and reinvigorated feminism by including not only race but also sexuality, ethnicity, nationality, immigration status, age, and ability.  Yet the tendency for regional stereotypes to inform understandings of gender and political behavior persists. Few scholars or analysts engage with the social context of place – in terms of region, community, or locality – as framework for understanding feminism or gender systems. And failure to understand gender systems and political behavior in particular places, not only in the American South, but also in Midwestern “flyover states” and “rustbelt” regions in the North East, contributes to misunderstandings of confounding political outcomes. 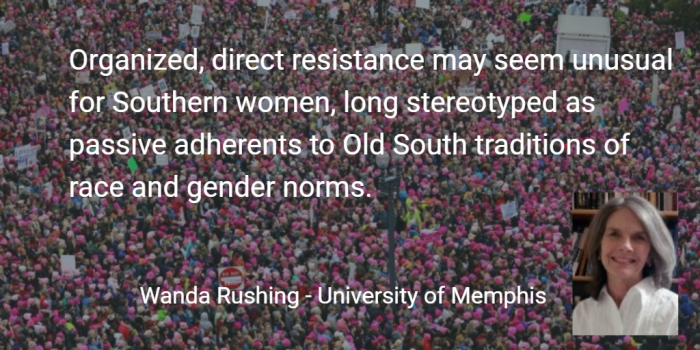 Place is more than a fixed, material, geographic location and offers alternative ways of thinking about intersectionality of gender, race, sexuality, and region.  When place is viewed as dynamic and agentic, it can be understood as being at the center of struggles of power and meaning and not relegated to the background. How the character and distinction of place affects and is affected by social actors varies across sites.  Many southerners have been willing to take risks by engaging in civil disobedience or pursuing legal remedies for discrimination.  A few prominent names include Dr. Martin Luther King, Jr., Ida B. Wells, Rosa Parks, Fannie Lou Hamer, Norma L. McCorvey (Roe v. Wade), Mildred Loving (Loving v. Virginia), Lilly Ledbetter (Ledbetter v. Goodyear), Barbara Jordan (congresswoman), and Crystal Lee Sutton (the North Carolina union organizer portrayed in the film Norma Rae). Moreover, in recent years, a North Carolina protest movement known as Moral Mondays has drawn tens of thousands of protestors to the North Carolina capitol and has inspired similar protest movements in Florida, Georgia, South Carolina, and Alabama.  Protesting GOP legislative cutbacks to Medicaid and public education, as well as North Carolina’s HB2, e.g., the “bathroom bill” which discriminates against transsexuals, the movement played a prominent role in voters denying a second term to N.C. Governor Pat McCrory and electing Democrat Roy Cooper in 2016. While ousting an incumbent Republican governor, North Carolina voters re-elected Republicans to the state legislature, and a majority of NC voters supported Trump, further confounding conventional wisdom.

Nearly two years ago, South Carolina state officials lowered the Confederate flag from the grounds of the statehouse. The legislative decision to remove the flag came in response to public outrage following the massacre of nine churchgoers attending Bible study at Emanuel African Methodist Episcopal Church in downtown Charleston.  One of the most polarizing symbols of the Old South, the Confederate battle flag was raised defiantly in 1962, symbolizing white southern resistance to racial desegregation. Calls for removing the flag remained politically controversial for more than 50 years. But political debates changed following the church shooting and arrest of a young white man who posted the flag and a racist manifesto online before the shooting.  White conservatives, including state Senator Paul Thurmond, son of segregationist U.S. Senator Strom Thurmond, demanded and obtained action to remove the flag. Today, the Confederate flag is less likely to be displayed to symbolize one region – the South, or one place – South Carolina, the first state to secede from the Union and join the confederacy in 1860.  However, the flag is more likely than before to be displayed as a symbol of white racial identity throughout the United States. During the 2016 election and post-election rallies and parades, Trump supporters waved the Confederate flag in places such as Durango, Colorado; St. Petersburg, Florida; Hampton, Virginia; Fort Worth, Texas; Traverse City, Michigan: Silverton, Oregon; and Mount Vernon, Ohio.

Symbols of place identity and attachment, linked with traditional ideas about race, gender, and sexuality, can be constructed and employed as a means of resisting social change.  Many places, not only Southern states and locales, but also places presumed to be more liberal such as Oregon and Vermont, or more representative of America’s Heartland, such as Nebraska, deploy these political strategies of resistance.  Prior to the 2015 U.S. Supreme Court ruling supporting same-sex marriage, many state-wide organizations opposed same-sex civil unions using tropes of place-based authenticity, traditional gender roles, and hegemonic masculinity to frame their campaigns. On the west coast, Oregon opponents framed the debate over marriage equality as rural vs. urban and valorized the struggle of rural Oregonians. “Take Back Vermont” the northeast campaign against civil unions, expressed nativist resentment and discredited supporters of marriage equality as “elitist outsiders.” The Nebraska campaign contrasted authentic Nebraskans with outsiders, depicted as “metropolitan gays”, and urged voters to resist the outsider thereat to hard-working populist families by embracing hegemonic masculinity and traditional gender roles. The exclusion of other people, possibilities, and life experiences within different locales returns us to the topic of intersectionality.

Place matters and provides an additional level of complexity for understanding social and political phenomena. Scholars, political analysts, and activists have much to gain by broadening the concept of intersectionality to include place, social context, region, and locale. Intersectionality offers a conceptual framework for thinking about the dynamics of place as part of the analysis of exclusion and marginalization.  Knowledge about place challenges old assumptions about region.  It makes invisible social actors more visible, and raises awareness of the use of racialized and gendered symbols in political campaigns. Potentially, understanding place and intersectionality will make analysis of political campaign outcomes, policy debates, and organized resistance much richer and less confounding.

This article is based on the paper, “No Place for a Feminist: Intersectionality and the Problem South: SWS Presidential Address” in the June 20017 Issue of Gender & Society