The success of politicians (e.g., Donald Trump) and political movements (e.g., Brexit) that express skepticism toward experts raises important questions about the political implications of declining trust in expertise. Research from Matt Motta shows that anti-intellectualism – the distrust and dislike of experts – is associated with support for political candidates and movements who share those feelings. It is also linked with opposition to scientific consensus on climate change and nuclear power.

In June 2016, outspoken Brexit advocate Michael Gove claimed that the United Kingdom has “had enough of experts.” Gove was apparently “glad” that his campaign failed to win the support of European Union economists; echoing the catchphrase of America’s most-prominent Brexit supporter in telling them, “you’re fired!” On the campaign trail, President Trump – who frequently expressed skepticism towards economic and scientific expertise – returned the favor by declaring himself “Mr. Brexit.”

The electoral successes of Donald Trump and Brexit share something important in common. Both attempted to appeal to voters’ distrust of expertise in rallying support for their causes. Were they successful? More generally, what are the political implications of the public’s declining trust in expertise?

My new research suggests that anti-intellectualism – i.e., the public’s distrust and dislike of experts – has important political consequences in the United States. Drawing on more than four decades of survey data, I find that anti-intellectualism is linked to voters’ support for candidates and political movements that are skeptical of expertise. I also find that it is associated with opposition to policy-relevant scientific consensus on human-caused climate change and the safety of nuclear power. 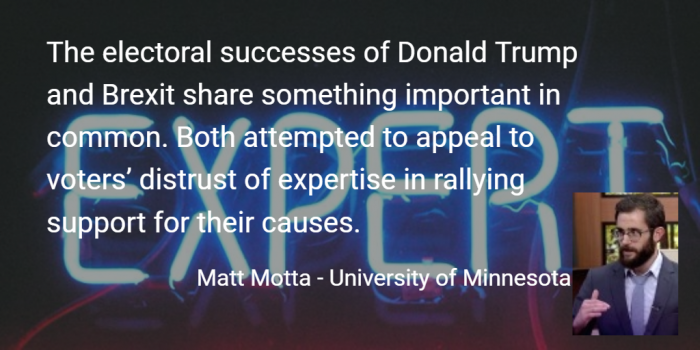 Elites’ use of anti-intellectual rhetoric, with the hope of winning popular support from like-minded voters, is not a new phenomenon. The use of the term “anti-intellectualism” to refer to citizens’ negative attitudes toward scientists, academics, and other experts was popularized by Richard Hofstadter in the early 1960s. Mid-twentieth century politicians like Wisconsin Senator Joseph McCarthy  (who called for investigations into academics’ supposed-ties to Communism) and Alabama Governor George Wallace  (who derided college professors and judges as “pointy-headed intellectuals”)  frequently made use of anti-intellectual language.

However, since the mid-1990s, anti-intellectualism has been on the rise in the American public, especially amongst self-identified ideological conservatives, as demonstrated in Figure 1. Since 1972, the General Social Survey (GSS) has asked nationally representative samples of Americans (roughly once every two years) to report whether they have a great deal, only some, or hardly any trust in the “scientific community.” The figure plots the proportion of liberals and conservatives placing high levels of trust in the scientific community (Note: this is an extension of analysis from Gordon Gauchat).

Figure 1. Liberals and Conservatives’ trust in the scientific community 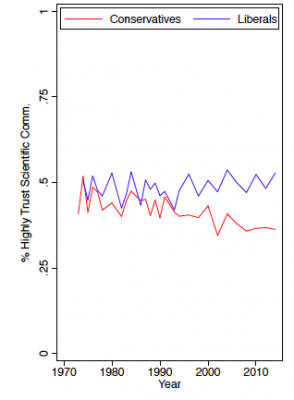 Anti-intellectualism has also been observed through a national panel election study in 2016. The Center for the Study of Political Psychology at the University of Minnesota’s Eric Oliver and Wendy Rahn asked respondents to report the extent to which they agreed or disagreed with the following statement: “I would rather place my trust in the opinions of ordinary people than the opinions of experts and intellectuals.”

My research shows that anti-intellectualism is associated with support for candidates who express skepticism toward experts. In the 1972 GSS, 22% of people who placed hardly any trust were predicted to support George Wallace’s presidential campaign in 1968, compared to only 12% of those placing a great deal of trust in scientists (about a 9% difference, with rounding).

In the CSPP study, anti-intellectualism was also associated with higher comparative candidate evaluations (CCEs) of Donald Trump, relative to Hillary Clinton. “Feeling thermometer” scales shows us that over the course of the 2016 campaign, net positivity toward Donald Trump was predicted to be between 5-9% higher for individuals strongly agreeing that expert opinions are less trustworthy than those of ordinary people, compared to those who strongly disagreed with that statement. Moreover, in the study’s June wave, nearly 44% of those strongly agreeing with the statement indicated that they supported the Brexit movement, compared to only 25% amongst those who strongly opposed the statement (an 18% difference).

Anti-intellectualism also has important policy implications. In the CSPP data, anti-intellectualism was associated with a 22% decrease in the likelihood of viewing climate change as caused by humans. In the GSS data, it was also associated with an 7% increase in the belief that nuclear power is dangerous (1993-1994) and an 8% decrease in the belief that climate change is dangerous (1993-1994, 2000).

Verbal intelligence as an indicator of anti-intellectual attitudes

Much work remains to be done concerning the origins of anti-intellectual attitudes. Factors like citizens’ interest in and knowledge about science, as well as their levels of education, have been proposed as potential explanations; often with mixed results. I conclude my research by considering a new explanation, originating from research in social psychology – verbal intelligence.

Verbal intelligence is usually measured based on scores on short vocabulary tests, and has been linked to open-minded thinking. This might encourage citizens to view experts positively, even when experts disagree or engage in self-promotional behaviors. Several waves of the GSS included a short measure of verbal intelligence.

For liberals and conservatives alike, I find that verbal intelligence decreases the endorsement of anti-intellectual attitudes. Scoring in the top 25th percentile on the test, compared to scoring in the bottom 25th percentile, was associated with a 9% increase in the likelihood of placing a great deal of trust in the scientific community (again using modeling strategies that account for basic demographic and political factors).

Matt Motta – University of Minnesota
Matt Motta is a PhD Candidate at the University of Minnesota, where he is a Doctoral Dissertation Fellow and NSF Graduate Research Fellow. In addition to studying citizens’ attitudes toward experts, he is broadly interested in how people acquire information about politics, and how that information shapes political behavior. Matt is also a research associate for the Wesleyan Media Project.