After the water recedes, Houston’s low income and communities of color must have a say in the city’s future

After the water recedes, Houston’s low income and communities of color must have a say in the city’s future

The past week has seen the city of Houston and some parts of Texas hit hard by the effects of Hurricane Harvey. Drawing on her research on the aftermath of Hurricane Katrina ion coastal Mississippi n 2005, Kate Derickson writes that the damage caused by such storms is closely linked to the landscapes of racialized inequality which exist in the areas affected. With Harvey’s damage likely to be the most severe in poorer neighborhoods and communities of color, she comments that, if the past is any indication, then these communities and their allies will need to fight for their right to shape Houston’s post-Harvey future.

As I write this, the floods from Hurricane Harvey are still cresting. We don’t yet know the scope of the storm’s damage, though we do know that it is on par with – or worse than – Hurricane Katrina, which hit the same coast further east nearly exactly 12 years ago.  Then, the devastation in New Orleans captured the country’s (if not the world’s) attention in part because images of poor people of color being stuck on roofs, stuck in poorly set up shelters and prevented from accessing safer ground at gunpoint laid bare the region’s racialized poverty in a country that was anxious to assert itself as post-racial.

My research in coastal Mississippi, 90 miles east of New Orleans and also heavily damaged by the storm, showed that even though neighborhoods in the city of Biloxi were racially segregated and there was more damage in neighborhoods with higher concentrations of people of color, city officials and business leaders were eager to assert that the “storm did not discriminate” and that “God made the elevations” of the city.  This attempt to “naturalize” the storm’s impact and the social geographies of the region runs counter to geographic scholarship which has shown that there is no such thing as a “natural” disaster.  Instead, storms come ashore and wreak havoc on landscapes of racialized inequality with profoundly uneven impacts on different groups.  Evacuation often requires means to pay for gas, lodging and access to an automobile, so poor people disproportionately stay put, even in the face of dire warnings.  During Harvey, the Border Patrol did not suspend its checkpoints, potentially contributing to undocumented people choosing not to risk evacuation. Vulnerabilities to flooding, in particular, are often functions of land markets: people with fewer choices in housing wind up concentrated in riskier areas.  After flooding events, neighborhoods can be slow to rebuild, with vacant lots and uneven landscapes further depressing land values and concentrating poverty.   So while it is certainly the case that the suffering wrought by Harvey will be deep and profound across the population, if Katrina is any indicator we can expect that the damage from the storm will be most severe in the poor neighborhoods and communities of color (explore the geographies of Houston and the Social Vulnerability Index here). 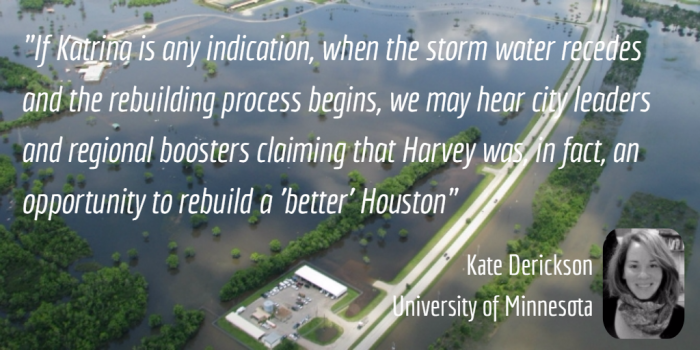 “Aerial Photos of Houston Flooding” by U.S. Army Corps of Engineers is licensed under CC BY 2.0

My research in Mississippi after Katrina suggests that surviving and thriving during the redevelopment process that unfolds after the storm is also challenge for communities of color.  Even as city officials and leaders were insisting that race was not a factor in the impact of the storm, they were actively targeting historically Black neighborhoods in the region for new uses in their redevelopment plans.  These plans often referred to the storm an “opportunity” to remake the city in ways that were more amenable to capital accumulation, with an emphasis on place-promotion and casino-driven tourism.  City leaders and residents from outside these neighborhoods referred to them in focus groups and interviews as “blighted” and “cancerous,” seldom acknowledging the racial implications of not rebuilding those neighborhoods.  Funds for rebuilding also flowed in ways that had an uneven racial impact, favoring home owners (who were more likely to be white) and penalizing those who did not carry expensive and optional insurance (who were more likely to be low income).

If Katrina is any indication, when the storm water recedes and the rebuilding process begins, we may hear city leaders and regional boosters claiming that Harvey was, in fact, an opportunity to rebuild a “better” Houston.  If so, scholars, planners and activists will need to be attentive to how low income and communities of color factor in to those plans.

There is one striking difference between today and 12 years ago when Katrina hit, however, that may have consequences for Harvey recovery and redevelopment.  When writing about Katrina and its aftermath, I was working in the context of what many imagined to be “post-racial” America, and I labored to make the argument that neoliberal redevelopment was deeply racialized, despite the overwhelming rhetoric of “banal multiculturalism” that insisted we don’t “see” difference.   Post-Harvey redevelopment will take place in the context of a very different national conversation about race.  A few weeks after the President equivocated in denouncing white nationalists marching with torches, USA Today, arguably the country’s most mainstream newspaper, published an op-ed that argues that the conservative policy platform today has profoundly racialized consequences that are masked by what the author argues is a “well-mannered white supremacy.”

While academics and activists have long argued that white supremacy is a deeply rooted structural social force that is not confined to those with white robes and torches, this argument has often felt very far removed from mainstream policy conversations or the pages of national newspapers.  It remains to be seen whether and how the mainstreaming of these conversations will impact post-Harvey redevelopment, but I hope it contributes to discursive and geographical space for Houston’s low income and communities of color and their allies to argue forcefully for their right to shape Houston’s future.

“Aerial Photos of Houston Flooding” by U.S. Army Corps of Engineers is licensed under CC BY 2.0.

Kate Derickson – University of Minnesota
Kate Derickson is an Associate Professor of Geography, Environment and Society at the University of Minnesota.  Her research interests include racialization, urban political economy, and community-based activism.  She has worked extensively with historically marginalized communities in Mississippi, Atlanta, and the Govan neighborhood of Glasgow, Scotland.  Her work has been published in academic journals, including the Annals of the Association of American Geographers and Progress in Human Geography.