It’s not a lack of information that stops many Americans from adapting to flood risks; it’s a lack of cash.

It’s not a lack of information that stops many Americans from adapting to flood risks; it’s a lack of cash.

The devastating effects of Hurricane Harvey on the south coast of the US have raised new questions about how Americans deal with flood risk. Drawing on her research on how New York responded to the aftermath of Hurricane Sandy, Rebecca Elliott argues that giving people in flood prone areas more information about flood risk is not enough; policymakers need to understand that many simply lack the financial resources needed to adapt to the flood risks they face.

Floods have long been the costliest disasters in the US. Now, with Hurricanes Harvey and Irma in the news, how can American communities help but have to reckon with flood risk? After seeing the devastation caused by such events, shouldn’t we expect to see individuals and communities around the US working quickly to measure their exposure to flood risk, proactively reduce it, and take steps to prepare for the human and economic consequences of future flood disasters?

Social science gives us many reasons to be pessimistic. A long tradition of research in cognitive psychology has outlined a number of “heuristics,” or intuitive shortcuts, people tend to use when interpreting risk probabilities. For instance, “optimism bias” leads us to recognize risks, but to think that others are more at risk. “Myopia” leads us to think in short timescales rather than consider the longer-term, which is often what prudent disaster planning requires. This may be why policyholders tend to cancel their flood insurance after a few years if they haven’t experienced recent floods. Recent research has also found that local perceptions of flooding follow ideological patterns resembling those of climate change, with conservatives more likely to reject evidence that floods have increased in the past or will increase in the future. History gives us even more reasons to be pessimistic. Floods remain costly—indeed, have gotten costlier—in large part because we have not learned the lessons of past disasters and have continued to build in floodplains, putting more people and property at risk.

Yet despite all this evidence that people are generally pretty bad at perceiving and internalizing risk information, some of the most frequent policy advice is to “improve risk communication.” If we experts can just overcome the biases and ideological hang-ups of the public, people will finally “get it” and do what it takes to reduce their risk. I don’t disagree with this advice. But based on my research in New York City in the aftermath of Hurricane Sandy in 2012, I do think it’s partial. The “give them more and better information” strategy assumes that attitudes predict behavior, but social scientists have long known that there is often a gap between them. People express attitudes that imply one course of action, but then take another. 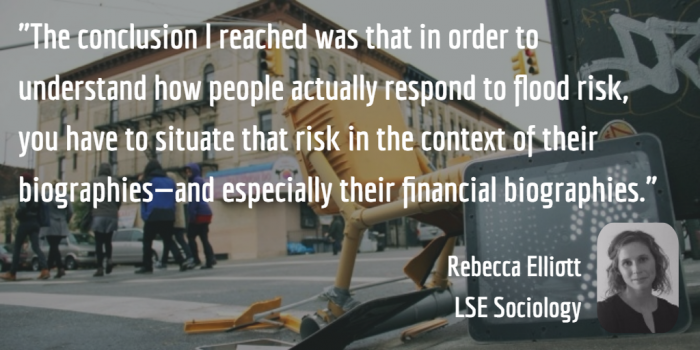 Using ethnographic and interview methods, I set out to see how New Yorkers were actually responding to flood risk after Sandy. After the storm, a survey of homeowners in flood prone areas of the City found that 86 percent of respondents believed they live in a high flood risk area. Yet despite that pervasive understanding of risk, the behavior that followed was highly variable. Across the city, some homeowners elevated their homes above the expected flood elevation, but others refused. Some homeowners in Staten Island mobilized for a community buyout, while others in Queens told me, “You’re wasting your breath… we’re never going to move away.” Some New Yorkers thought that new flood maps, released after the storm and which depicted much larger flood zones, showed what climate change would bring to the city, while others mounted a fight against them, arguing that the zones were too big—even though they closely matched the extent of the inundation from Sandy.

The conclusion I reached was that in order to understand how people actually respond to flood risk, you have to situate that risk in the context of their biographies—and especially their financial biographies. In the US, flood risk is not simply depicted on maps and delivered as information; it’s also priced and turned into an individual insurance premium. Flood insurance, provided by the National Flood Insurance Program, is mandatory for mortgage-holders. That means that when many Americans reckon with flood risk, they necessarily have to confront new or increasing household costs, in addition to threats to their property values.

A legal aid attorney I interviewed started keeping a list of the reasons that many of her clients were refusing home elevations. It largely was not because they didn’t understand the benefits of risk mitigation (which would also lower their flood insurance premiums). Rather, they didn’t have the cash upfront to finance the work, even if they could be partially or completely reimbursed eventually. Or they couldn’t afford temporary rent—plus a mortgage payment—for the potentially long time that they would be displaced from their homes while the work was done. Or they cashed out their retirement, or borrowed from friends and family, to make repairs immediately after the storm and were just too exhausted to face more instability.

I observed similar pressures firsthand. One woman, who had actually elevated her home when she rebuilt after Sandy, was nevertheless involved in political advocacy to fight the city’s new flood maps. When I asked why, when she seemed to have already responded to the risk on the new maps, she said she wasn’t going to get a government buyout and then who would want to buy her house if it was in the highest risk flood zone?

Financial biographies are in turn determined by larger political economic forces. In a country with a frayed and fraying social safety net, the economic security of many families is tied up in the most important asset they’ll ever own: their home. While we can and should keep finding better ways to communicate flood risk, scholars and policymakers need to spend much more time and energy figuring out how to support individuals and communities to do something differently in response to that risk. Existing pre- and post-disaster mitigation programs need to be expanded and made much easier to access. In the most threatened areas, buyouts like those offered in Staten Island, which offered pre-storm value for homes and included bonuses for relocating within the borough, make it possible for families to survive the profound social dislocation that comes with such a decision. This implies a reorientation to how we tend to think about this problem and its solution: a shift from focusing on cognitively deficient individuals to addressing the collective failures that both produce flood risk and make it so hard for many Americans to adapt.

Rebecca Elliott – LSE Sociology
Rebecca Elliott is an Assistant Professor in the Department of Sociology at the LSE. Her research interests span economic sociology, political sociology, environmental sociology, and knowledge production and science studies. Her current book project examines the economic and political governance of climate change through the lens of flood insurance.