Recent years have seen an increase in the number of “bathroom bills” enacted by state legislatures which designate who may use bathrooms in schools and other public buildings depending on their biological gender. Mercedes Wilby argues that the idea of biological gender is unhelpful in these circumstances because it isn’t always clear-cut and physiology isn’t always binary. Such distinctions discriminate based on prejudice rather than science.

In March, the North Carolina General Assembly “repealed” House Bill 2, their infamous “bathroom bill,” while preserving binary gender designations for bathrooms and banning local governments from protecting LGBT people. This non-repeal came less than a month after the Supreme Court issued a non-decision, sending G.G. v. Gloucester County School Board back to the lower court for further deliberation. Both of these events highlight the importance of developing a clear jurisprudence for protecting all gender identities.

G.G. v. Gloucester County School Board became famous thanks to plaintiff Gavin Grimm (aka G.G.), a transgender teen, who was denied use of the men’s toilet at his Gloucester, Virginia high school. He sued his district’s school board on the grounds of sex discrimination and, when his case was escalated to the Supreme Court, Gavin became the unlikely symbol of transgender rights.

During this case, the Supreme Court received friend of court briefs from various organizations and interested parties. The brief filed by InterACT—an intersex advocacy group—provides the best logic for overturning this and all bathroom laws.

The Grimm case revolves around the question of whether Title IX protections based on sex also cover gender. The Gloucester County, Virginia School Board claims that sex only refers to “physiological sex” and therefore protects people based exclusively on their “biological gender.” Gavin Grimm, a transgender male, would therefore be required to use a bathroom that corresponds to his “biological gender”—which is female. But “biological gender” is a term of art; it means nothing. There is no medical definition, and the school board does not give its intended meaning, though, given the context, we can assume it to be one’s physiological sex as determined anatomically.

That’s a highly problematic definition, as InterACT points out. Our genetic sex (usually XX or XY) isn’t always our phenotypical sex (in essence, our sex based on apparent physical traits). Likewise, our outward phenotype may differ dramatically from our internal anatomy. In other words, the School Board’s interpretation of Title IX creates a legal distinction based on the inaccurate assumption that our biological gender is a binary condition. Put another way, the School Board was wrong; Title IX cannot be construed to only protect binary “men” and “women” based on their physiology, because physiology isn’t always binary and biological gender isn’t always clear-cut.

HB2 would also have required Gavin to use the women’s bathroom—his birth certificate says he’s female. This, too, is problematic; when an infant has an intersex disorder their anatomy does not always conform to binary gender categories, so doctors can pick wrongly. As such, the sex listed on a birth certificate is no more than a guess based on pre-pubescent anatomy. 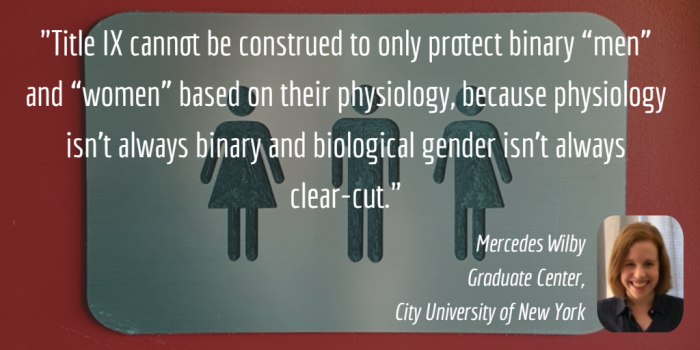 Whichever by Exile on Ontario St is licensed under CC 0.

“Intersex” is an umbrella term that refers to a number of conditions that alter the typical development of biological sex characteristics. Intersex conditions affect nearly two percent of the population—about as common as red hair. They are gender nonconforming not because they are transitioning between genders, like Gavin, but because their bodies do not fit into the traditional binary definitions of biological gender.

Let’s consider my friend—we’ll call her Jane. She is genetically XY (which typically indicates male biological gender) but because of an intersex disorder she is phenoptyically a woman—you’d never know she wasn’t XX unless you saw her genetic testing. In fact, she didn’t know anything was amiss until she had ovarian cancer as a teenager. It was only then, when doctors discovered that her ovaries had not developed properly, that they suspected she had an intersex condition. In other words, she identifies as female and might not have known she wasn’t typically female had it not been for the cancer. But genetically she is, by a very strict and unenlightened definition, male.

Which bathroom should she use at Gavin’s school? The answer is obvious: she’s a woman—it says so on her birth certificate, which would have been proof enough for North Carolina under HB2—so she should use the women’s room. However, she’s not female in the binary sense that Gavin’s School Board insists on. As an intersex woman she could, theoretically, be told to use the men’s room.

Jane’s case is different from Gavin’s. Her gender identity and her outward appearance have always aligned, so there is no question that she should use the women’s bathroom. The truth is, a majority of people with intersex conditions will never face the problem Gavin is facing. However, the fact that intersex individuals don’t fit into binary “biological gender” classifications proves that the Gloucester School Board’s policy and its interpretation of “sex” under Title IX are illogical.

Based, presumably, on prejudice rather than science, “biological gender” is an overly vague term that means nothing and says everything. By attempting to create a law that discriminates against transgender individuals while avoiding outright discrimination, the School Board tried to create a distinction between two binary, biologically-based genders, ignoring the fact that gender, at a biological level, isn’t always binary. This uninformed distinction—replicated in North Carolina’s HB2 and its replacement—most certainly should render the School Board’s policy, and all similar laws, unenforceable and unconstitutional.

Mercedes Wilby – Graduate Center, City University of New York
Mercedes Wilby is a PhD student in Political Science at the Graduate Center, City University of New York, and a Teaching Fellow at Baruch College. She holds an MSc in Politics and Communication from the LSE. Before returning to academia, she worked as a policy advisor and press secretary on several American political campaigns. Her research interests include the American electoral system, Constitutional law and civil rights policy, and science policy.