Social capital is mostly seen as a ‘good’: bringing communities together and, in the case of criminal justice, encouraging social empathy which can lead to less harsh sentencing. But these analyses ignore racial divisions in social capital. In new research, Daniel Hawes finds that while social capital can reduce the Black-White disparity in incarceration rates in states with few African Americans, in states with greater numbers of African Americans, perceptions of racial threat can activate social capital in white communities, leading to greater targeting, profiling and arrests for minorities.

Social capital is a glue that holds communities together and can act as a social lubricant to help society function more smoothly. It can be thought of as “connections among individuals” or “social networks and the norms of reciprocity and trustworthiness that arise from them”. This includes both formal and informal networks, all of which make individuals and communities more connected. Membership in formal organizations and fraternities, informal social gatherings, volunteering with a local charity and neighbourhood watch programs are all everyday examples of social capital. Importantly, a large body of research finds that higher levels of social capital are associated with greater social trust, political participation, and citizen cooperation resulting in better social and policy outcomes in the aggregate.

Recent work, however, has begun to more closely examine how the benefits of social capital are distributed in society. Over past two decades, Rodney Hero has argued that there is tension between racial and ethnic diversity and social capital and that the effects of social capital in the aggregate may actualy increase racial inequality. My research explores this further by specifically looking at the relationship between social capital, racial context and incarcerations in the American states.

The United States has the higherst incarceration rate in the world and rates have continued to rise even after crime rates fell precipitously in the 1990s. Equally alarming is the large racial disparity regarding who is actually incarcerated. African Americans are significantly overrepresented in the prison population making up over 37 percent of the total while comprising only 13 percent of the total US population. Black men, for example, are seven times more likely to be incarcerated than white men of a similar age. This is a policy problem that has concerned academics and policy makers alike for a number of years.

So, how might social capital influence incarceration rates? Here, we have competing hypotheses.  On one hand, social capital can increase social empathy, which may make citizens more likely to support lower sentences or rehabilitation programs rather than harsh sentences. This can operate directly through how citizens behave and the role they play in the criminal justice process (e.g. how they report crime, participate on juries) or more indirectly through the development and adoption of public policy (e.g. whether they elect “law and order” candidates, support or oppose harsh crime legislation). Social trust and empathy should make citizens more likely to place themselves in their neighbors’ shoes, give others the benefit of the doubt, and support second chances. This should result in fewer incarcerations, all else being equal.

On the other hand, it is also possible that empathy and the norms of reciprocity will only apply to those who follow these norms. Social capital includes social expectations, obligations and norms that, if broken, are met with sanctions and punishment. That is, social capital can increase the level of social controls in a society. Add to this the fact that social capital is associated with greater government efficiency and effectiveness. We may, therefore, have a situation where more crimes are solved (due to citizen cooperation) coupled with less tolerance for rule-breakers due to social norms of cooperation, which, in theory, would lead to higher incarceration rates.

Racial context is key to the effects of social capital

I argue that whether social capital increases or decreases incarceration rates depends on the racial context in which it operates. Racial threat theory posits that as the size of a minority group increases within a population, prejudicial attitudes of whites will also increase. This is due to a perceived threat that the minority group poses toward scarce economic resources and social privilege. I argue that racial context can activate social capital to enhance feelings of racial threat.  Take, for example, a hypothetical neighborhood watch program in a high social capital neighborhood. Due to a high sense of community and civic engagement, neighbors vigilantly monitor the neighborhood and faithfully report “suspicious” activity. If racial threat is present, a Hispanic or African American man driving through the neighborhood may be at an increased risk of being reported to police as “suspicious” than his white counterpart. If social capital were low, there may not be an effective neighborhood watch program and the “suspicious” activity may go unreported. Thus, it is the combination of racial context and high social capital that results in an increased likelihood of a report being filed. An active and engaged neighborhood watch program could be thought of as more “effective” policing (i.e., more arrests and incarcerations), which in itself is a good thing. However, if social capital triggers social controls only when minorities are present, then minorities who do live in these areas may be more likely to be targeted and profiled; hence, we may see higher disparities across racial/ethnic lines. 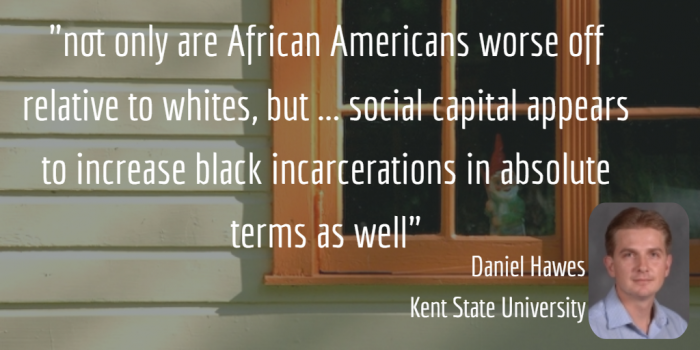 “the tomte: they are everywhere” by Dayna Bateman is licensed under CC BY NC SA 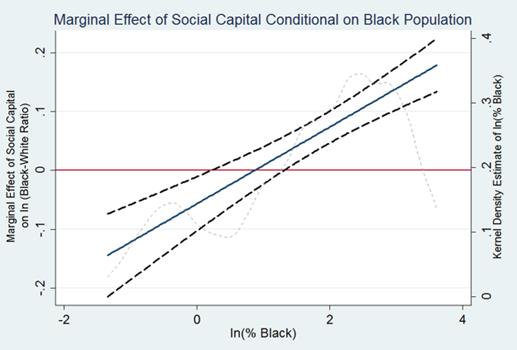 My research finds that racial context plays an important role in how social capital operates. This supports Rodney Hero’s contention that the benefits of social capital are not equally felt by all members of society. Minority groups, in particular, seem to be left out. The findings here, however, go further in finding that not only are African Americans worse off relative to whites, but that social capital appears to increase black incarcerations in absolute terms as well. This supports a small but important literature that has explored the so-called “dark side” of social capital. Future work should continue to explore this conditional relationship and further uncover the causal mechanisms of this relationship.

Daniel Hawes – Kent State University
Daniel Hawes is an Associate Professor in the Department of Political Science at Kent State University. His research is interested in how social and government institutions can better address the inequalities in policy outcomes for disadvantaged groups. His research has appeared in Political Research Quarterly, Public Administration Review, J-PART, Policy Studies Journal, State Politics and Policy Quarterly, Social Science Quarterly, and the American Review of Public Administration.