Other than a brief resurgence in last year’s presidential election, former Massachusetts Governor Mitt Romney has largely stayed out of the political limelight following his 2012 presidential election defeat. That may all be about to change if long-time incumbent Utah Senator Orrin Hatch chooses to retire. Damon Cann writes that if Hatch were to retire – as many Utahans seem to wish – polls suggest that Romney would easily be able to win the Senate seat’s GOP primary and general elections.

Earlier this month, Utahpolicy.com Managing Editor Bryan Schott broke the news that Mitt Romney will run for Senate in Utah in the event that the 40-year incumbent, Orrin Hatch retires, citing an unnamed source close to Romney.  While media reports had circulated that Romney was exploring the possibility of a candidacy, this is the most concrete evidence to date that Romney is quite serious about this.  Taking the unnamed source’s claims as accurate, there are only a handful of questions that remain.  First, it’s natural to ask whether Hatch will run again, as that decision is clearly consequential for a Romney run.  Second, should Romney run, would he be able to win in the primary and general election stages?

There is every reason to believe that politicians are strategic in deciding whether to run for office and whether to seek reelection (consider, for example, Jacobson 1989; Brown & Jacobson 2008; Groseclose & Krehbiel 1994).  Hatch may be considering his likelihood of success.  In 2012, Hatch faced an in-party challenge that ultimately led to a contested primary; Hatch could face a similar challenge again.  While Utah is traditionally not a competitive general election state, multiple polls have shown evidence that Hatch could struggle even in a general election.  For example, a recent Salt Lake Tribune poll found that 78 percent of Utahans want Hatch to retire.  What’s more, in a recent head-to-head trial heat between Hatch and declared Democratic candidate Jenny Wilson, Hatch comes up the loser with 34 percent for Hatch and 45 percent for Wilson (though 21 percent lie in the “don’t know” category).  With Hatch having made a promise in the 2012 election that this term would be his last, Utah voters are clearly hoping that he will make good on that promise.

While these numbers may give Hatch pause, there are strategic reasons why he may continue to act as a candidate even if he intends to retire.  Hatch has praised both Mitt Romney and Utah 2nd district Representative Chris Stewart as excellent candidates should he retire.  As long as Hatch remains indecisive, other candidates are largely frozen out of the field, being unable to fundraise.  This process doesn’t harm either Romney, whose independent wealth makes fundraising less important for the success of his candidacy, or Stewart, who can raise funds as though he is seeking reelection to his House seat and roll those funds over into a Senate campaign.  Some observers have speculated that Hatch’s extended public indecision actually stems from a desire to freeze out other candidates in favor of Romney or Stewart rather than a genuine indecision about whether to seek an 8th term in the Senate.

“Mitt Romney” by Gage Skidmore is licensed under CC BY SA 2.0

Assuming Hatch is out and Romney is in, what are Romney’s chances of success?  Romney stands as among the most popular politicians in the State of Utah.  His legacy as the successful overseer of the 2002 Winter Olympics continues strong, and his popularity was amply demonstrated in the 2012 presidential election.  Then, Romney won Utah with 73 percent of the vote.  This outstrips the typical margin for Republicans in Utah, with McCain having earned 63 percent in 2008 and Trump, who struggled with Mormon voters, who earned only 46 percent of the vote.  Romney far outpaces Democratic challenger Jenny Wilson in a head-to-head trial heat.

While Romney’s success in a general election is a virtual guarantee, one might wonder whether he would struggle in a primary election in light of Utah’s conservative Republican base.  What’s more, Romney has been among the most vocal opponents of Donald Trump.  One might expect to see a pro-Trump candidate as well as a far-right candidate emerge.  While Hatch’s indecision has made fund-raising more difficult, candidates in these molds may be able to find support from super PACs that could support their bids even if their campaign fundraising levels are low.  That said, Romney has appeared before the same statewide Utah Republican electorate twice before (in his 2008 and 2012 primary election bids), with his most recent effort netting 93 percent of the vote, even with more conservative options on the ballot.

In short, unless Romney makes a significant misstep, it appears that a Utah Senate seat is his—if Orrin Hatch is willing to give his up.

Damon Cann – Utah State University
Damon Cann is assistant professor of political science at Utah State University where he specializes in American politics and quantitative methods. He is the author of Sharing the Wealth: Member Contributions and the Exchange Theory of Party Influence in the US House of Representatives.

Posted In: Damon Cann | Elections and party politics across the US 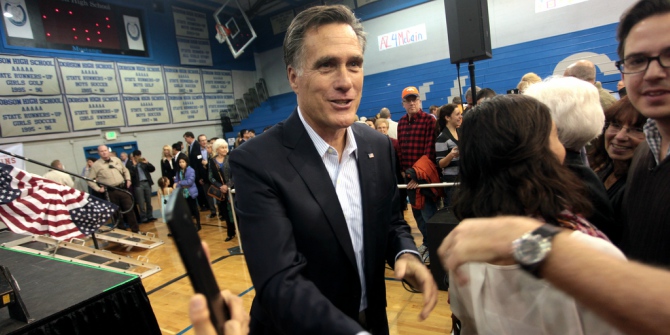