On both sides of the Atlantic, downtown shops need to stick together to survive

On both sides of the Atlantic, downtown shops need to stick together to survive

Downtowns on both sides of the Atlantic have been under threat for decades: first from the rise of suburban malls, and now from the growing popularity of internet shopping. In new research which studies a century of retail change in Detroit and The Hague, Conrad Kickert and Rainer vom Hofe find that the closer shops are to each other, the lower their chance of closure. This pattern is especially true for shops which sell goods which are bought less frequently and are often compared, such as fashion or art.

Downtown is under siege. The American Main Street has been suffering a decline of retailers for decades due to the rise of out-of-town shopping malls. As European protectionism cannot prevent retail consolidation and online shopping, an increasing number of shopping streets across the Atlantic are now also beginning to empty out. As a result, street-level retail decline has again risen on the agendas of governments and think tanks on both sides of the Atlantic. As they draw up strategies to counter the downfall of downtown retail, they cannot draw their ammunition from academic studies that have demonstrated how this decline actually takes place. Is there a pattern to the closure of downtown stores, and if so, can we use it to turn the tide?

To find a common pattern of retail decline, our research delves into a century of retail change in two cities on both sides of the Atlantic between 1911 and 2011. We deliberately picked cities that seemed like perfect opposites: the beleaguered downtown of Detroit in Michigan and the award-winning city center of The Hague in The Netherlands. First impressions might fool you, as both cities actually experienced a steady and significant decline of retailers over the past century: the demise of downtown is a much longer-drawn story than one might imagine. Our study focused on how this decline happened at the level of individual establishments, specifically whether there were patterns that would influence the chance of a retailer closing. One of these patterns is the location of shops: retailers in more remote and poorly connected places were the first to shut down over time. At an even smaller scale, we discovered that shops in larger clusters had a much lower chance of closure. In other words: if shops want to survive, it’s best for them to stick together. 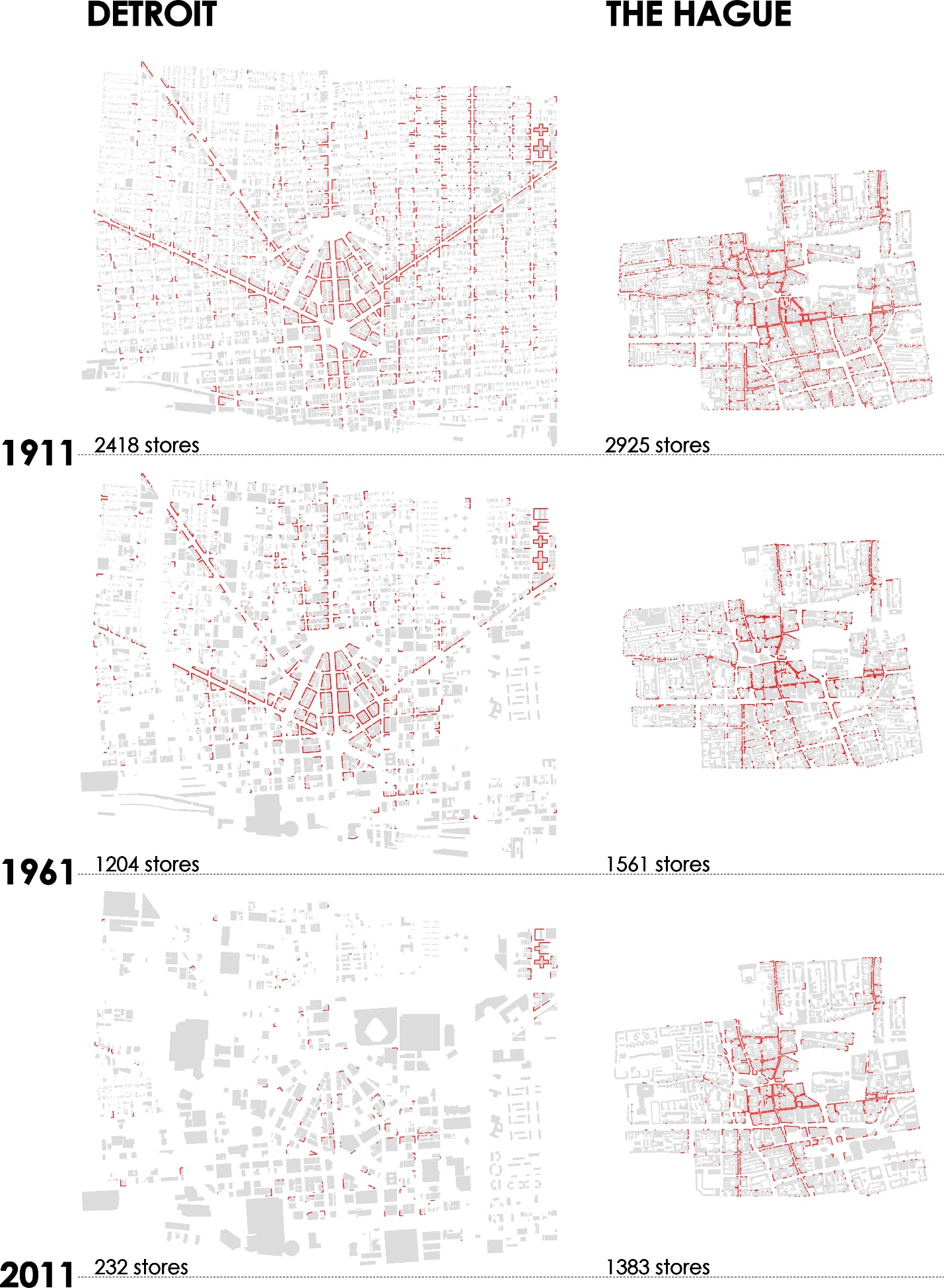 This finding is not exactly out of line with the current theoretical consensus. Grounded in urban and regional theories by economists like Lösch, Christaller and Hotelling, the benefits of clustering for retailers are well understood today. By locating right next door to a competitor, retailers can take the most market share from their neighbor. They can also benefit from a nearby competitor by jointly offering a larger range of merchandise, attracting consumers looking to easily compare goods. This is exactly the model that fueled the success of the regional shopping mall for decades. But no-one has tested whether this model holds true at the level of the single retailer in the urban core, and in the face of decline.

To prove the benefits of clustering in this situation, we have collected the location of over 25,000 retail establishments in the urban cores of Detroit and The Hague in roughly 10 to 25-year intervals over the past century. For each retailer, we determined whether they would close over the next interval. We then defined mortality as the higher or lower than average chance a shop would close, controlling for the much-higher average chance of store closure in beleaguered Detroit. We then determined whether this weighted chance of closure was dependent on how many other shops were located within 50 meters. Lastly, we also annualized the results, as not all study time intervals were the same due to data limitations. Figure 2 below indeed indicates that the more shops stick together, the less vulnerable they are to closure. Stores that are within 50 meters of at least 16 other stores in Detroit or 23 other stores in The Hague have a lower than average chance of closure. The difference between Detroit’s and The Hague’s retail mortality can be explained due to variations in the type of retailers, their size, and their mode of access. 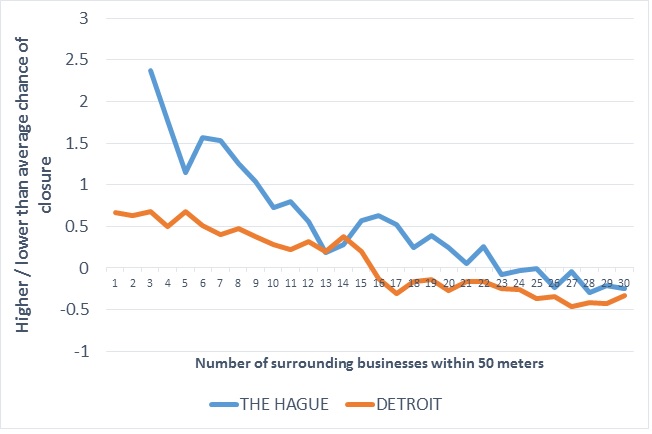 Note: The two lowest data points have been removed for The Hague as hardly any stores were surrounded by only one or two other stores within 50 meters, skewing the annualized results.

We also wanted to know if some types of stores were more sensitive to clustering than other. Therefore, we categorized the type of merchandise that stores had on offer. We distinguished stores that sold comparison goods such as fashion or art, non-comparison goods such as hardware, books or services, and daily goods such as groceries or pharmaceuticals. Unfortunately, this categorization split the number of stores under study into datasets that were too small to determine a statistically significant difference in sensitivity. Nevertheless, our preliminary results indeed show a strong difference in sensitivity between these types of retailers: as expected, comparison stores suffer from not having nearby stores to compare merchandise with, whereas daily goods stores are less sensitive. 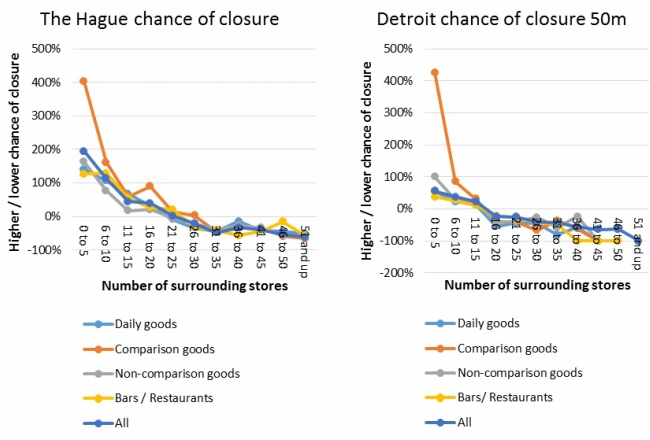 What do these beneficial effects of clustering mean for bolstering downtown retail? At the macro level, a further decline in the number of stores seems inevitable. Big box stores and online retailers will not cease their onslaught on Main Streets and High Streets on both sides of the Atlantic, although they continue to explore a presence in smaller, urban locations. The rise of the experience economy can only do so much to soothe the chilling effects of this trend. In the end, maintaining a critical mass of downtown shops will help to mitigate the decline of downtown retailers at the street level in the face of overall decline. For clustering to be successful, gaps in the continuity of retail storefronts should be avoided at all cost. If there are no retailers to take up empty storefronts, another strategy is to lease them to ‘pop-up’ retailers, whose success have made them a mainstay in many Western urban cores since the Great Recession. Governments can help subsidize their rents, with the overall clustering benefit most likely outweighing this cost.

When the total number of retailers falls structurally below the supply of storefronts, cities can take an active role in redistributing remaining retailers in ‘rightsized’ clusters. This requires significant cooperation between local governments, building owners and tenants. It also requires a tough triage decision on which retail clusters to save, and which to let go. Private Business Improvement Districts or public downtown development authorities can help to acquire properties and tenants, and to coordinate stakeholders. When starting a new cluster of retailers or rebooting an urban street, a sufficient critical mass of retailers needs to open at the same time to benefit from clustering benefits, becoming a viable destination. This also means that investment should start small as a single viable retail cluster, expanding when the market is ready. With the correct public policies, building ownership and acquisition strategy, an increasing number of cities are successfully following this strategy. Again, this takes a tough decision on where to start, and where to hold off. Interestingly, this has been exactly the strategy downtown Detroit’s building owners have taken to reboot their virtually empty urban core since this research concluded – with quite some success.

Conrad Kickert – University of Cincinnati
Conrad Kickert is an assistant professor of urban design at the University of Cincinnati. Conrad’s research focuses on the evolution of urban form and the street level economy. He is currently finishing a book on the history of downtown Detroit, an edited handbook on bottom-up urbanism to be published with Palgrave Press, and working on a forthcoming book on interactive frontages. The dataset in this article draws from his dissertation on interactive frontages, a summary of which has been published in Urban Design International.

Rainer vom Hofe – University of Cincinnati
Rainer vom Hofe is an associate professor of urban planning at the University of Cincinnati. Rainer is a regional scientist whose work focuses on urban and regional economic development. He has studied and written about regional economic modeling, economic and fiscal impact analysis, as well as various quantitative planning methods. He is co-author of Research Methods in Urban and Regional Planning.